“I have learned over the years that when one’s mind is made up, this diminishes fear; knowing what must be done does away with fear.”

The above-referenced quote was made by Rosa Parks, a civil rights activist who famously refused to surrender her seat to a white passenger on a segregated bus in Montgomery, Alabama, OSA.

Her defiance sparked the Montgomery Bus Boycott and its success would ultimately launch a nationwide effort to end racial segregation of public facilities in the United States.

That was fifties America battling the debilitating scourge of segregation and racial inequality. But in the year of our Lord 2021, our society still struggles at the prospect of a woman wielding Executive powers.

“How can a woman be governor?”

“So, you’re telling us that with all the Igwes and Chiefs we have, we should support a woman governor so our royalties will be standing up for a woman at functions?”

It is against this backdrop that my friend, sister and colleague, the distinguished Senator Uche Ekwunife (IYOM), aspired to become the PDP flagbearer at the coming Nov 6 polls. Though the primary has come and gone, I just want to extol the virtues of this amazon for her uncommon display of courage, vision and passion in the way and manner she gave it her all on a turf traditionally considered the exclusive preserve of the male gender.

In spite of the many odds placed in her way and a society that frowns at the idea of a woman wielding executive powers, she powered on and indeed became a frontline aspirant that couldn’t be wished away and for this singular achievement, I not only celebrate but thank her on behalf of women and the many girls out there who are even now inspired by her action, to dare not only to dream big but ultimately shatter that glass ceiling. I retain no doubts, whatsoever, that her name is already written in gold.

Somewhere a little girl’s impressionable mind is soaking in all this and laying the foundation for a future that would not only beat the odds but completely shatter this age-long misconception. This could only have happened because of the examples set by courageous women like Uche, who, at one time in the race, had 17 leaders authoring and jointly signing a most unfortunate communique against her person and legitimate ambition! 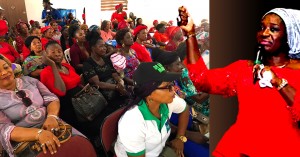 Senator Uche Ekwunife emblematizes access to empowerment for half of Nigeria’s population, who are females. Stopping Ekwunife is surely a major disappointment for millions of Anambra’s grassroots population, especially the womenfolk.

It was a contest that revealed the shocking extent some so-called leaders were willing to go to exhibit the kind of nauseating dishonesty, backbiting and betrayal like never before seen in the annals of politicking and my prayers to all those seemingly agreeable foes that conspired is that their daughters would face the same karma they wished on this woman.

And to the women who couldn’t see beyond pecuniary interests to understand that her aspiration represented a hope for the future emancipation of their daughters, this same karma that insisted and conspired to ensure a woman never tastes high office must naturally visit that girl child they hold dear.

But I doff my hat for Uche as she remained focused, undaunted and unwavering, soldiering on by tapping into a formidable network of extremely passionate grassroots loyalists garnered from years dedicated to directly impacting lives and spreading joy on the faces of everyone fortunate to experience her beautiful and humane aura.

She dared to pursue her dreams, remaining as constant as the Northern star even in Lion’s den and I, like many women out there, can beat our chests and celebrate with pride at what she was able to achieve.

We will extol her virtues and commend her for showing others to come to the possibility warehoused in a mind that is unwilling to bow and embrace society’s backward idea of the unsuitability of women for a state executive office.

Because of her and the input of other female leaders out there who are constantly daring and beating the odds, a template that would eventually usher in a future wave of highly competent, confident, self-assured, goal-oriented and go-getting women in high office is already set and being implemented. I retain no doubts, whatsoever, that that day will soon come when we can lift up our eyes and see no glass ceiling stopping women from becoming anything they set their minds and hearts to achieve.

Your highly impressive result, in spite of the very real, evident and powerful odds, demonstrates that we are barely inches away from shattering that glass ceiling. So, I congratulate all women out there because your victory remains our hope for better days ahead.

Thank you, nne, for standing up to be counted on our behalf!

Someday, we will get there!