Former Legal Adviser to the late head of state, General Sani Abacha, Prof Auwal Yadudu, has criticized the promoters of restructuring and charged them to follow the existing legal order, which is the 1999 Constitution.

But, Prof Yadudu, while speaking at the Zoom Conference organized by Governance Index Platform on the topic, “The Coronavirus Pandemic: Good Governance, Restructuring and the 1999 Constitution”, at the weekend, described as a fallacy, the saying that the 1999 Constitution was imposed on the country by the military and that Nigeria cannot progress if the Constitution is not changed.

The professor of law also said, in the event moderated by the president of Igbo Ekunie Initiative (IEI), Chief Tochukwu Ezeoke, that he didn’t author the 1999 constitution as being bandied by some individuals.

He explained that a committee chaired by the late Justice Niki Tobi authored the Constitution, although he admitted that General Abdulsalam Abubakar retained him as a legal adviser after the demise of Abacha.

“There is a chapter on fundamental rights which, as far as I can tell, is also being improved upon. You have a chapter defining the power of states and Executive, Judiciary, Legislature, only that it is an executive system, not a parliamentary system. We have a Constitution that is distributed between legislative, exclusive and concurrent lists. What is in this feature that is uniquely an imposition of either 1979 or 1999 constitution? It is not a perfect document. It can be improved upon and some can be even overthrown.”

He argued that it is a fallacy to keep saying the Constitution is an imposition and that we will go no further if we do not jettison it. According to him, the existing legal order is the 1999 Constitution and it has ways and means of changing it, including even entirely or terminates it. He stated that he has no problem with restructuring provided the action is carried out in line with the existing legal order, which is the 1999 constitution.

He also criticized the constitutional provision that allows the president to assent to bills or veto them, saying it is wrong in the spirit of the presidential system of government. 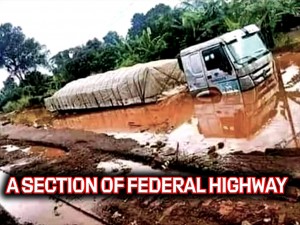 The widely repudiated and rejected 1999 Constitution imposes a 68-item Federal Exclusive Legislative List that cripples all socioeconomic infrastructure development throughout the country. All Nigeria is now ruled from a single location controlled by the Sokoto Islamic Caliphate in Abuja.

He said: “The timing he chose was complied with when the report went to him. We finished on August 14, submitted the report on the first week of September and he had the whole year to do what he wished with the report, but he did nothing about it.

“The president himself who choose a wrong time and even when it was handed over to him, he did nothing, not even a single recommendation in it did he implement. He just pushed the file to some other people.

Speaking during Conference, former chairman, National Electricity Regulatory Commission (NERC), Dr. Sam Amadi, kicked against the continuous amendment of the Constitution. According to him, when you amend the Constitution continuously, it creates a subject of contestation.

He said: “I am not a supporter of continuous amendment of the Constitution. The theory from political scientists is that the most stable Constitutions are those constitutions that have not been altered because when you amend a Constitution too frequently, they become a subject of political contestation.”

“The YADUDU-ABUBAKAR ORDINANCE was authored by Auwalu Yadudu. His denials are expected Islamic Taquiya show. Niki Tobi is a foil. The version under Abacha was much better because it contained six regional federations.

Abacha, as he had told Mbakwe, wanted to take his Kanuri people out of Fulani control. For this, he allied with Ndiigbo. Once he died, and Abubakar retained Yadudu, Fulani yanked off the idea of a six-regional federation and decreed what they like. If Abacha had succeeded in the six regional federation project, there would be no Boko Haram today fighting to keep Fulani herdsmen out of control of Lake Tchad Basin.” – by Prof. Chidi Osuagwu