As the Fulani Cabal and Their Collaborators Seek the Blood of the Bold Dr. Obadiah, … We Must Not Allow These Terrorists Go Away With Murder

The Order of Things

There was, uhmm, a storm in a teacup the other day. It involved, shall we say, yours sincerely. Life itself, as I’m sure my gentle readers would agree, is a risk. Once in a while, you have to wager some big risks.

The philosopher, Aristotle, famously declared that for you to have absolutely no enemies, you have to say nothing, do nothing and be nothing. I chose to say something. And for that, the bloodhounds are out for me.

I have done the sums. Existential choices come with big risks. Some of the fascista who call themselves journalists were howling like wolves under the full moon. They ridiculed my testimony and poured scorn on my academic qualifications. “Obadiah Mailafia’s outrageous falsehood”;

“With Oxford PhDs like Mailafia”;…on and on they ranted. A small fortune has been paid for my head. I know the powerful forces behind the murder plot. I have even been told the vehicles they have been given for that diabolical mission. I have transmitted all that data to the right quarters.

I fear no man. I fear only God. They will fail woefully because I am not alone. Because they, of the flaming swords, are with me. He who keeps Israel will neither slumber nor sleep. Jehovah El-Elyon is with me. The Lion of the Tribe of Judah is my Redeemer and my Defender. I will not die; I shall live to glorify the Lord my God.

Judged by order of eternity, the fitful drama of our puny lives is but a paltry thing like the play of ants beside a giant oak tree. They will surely gather, but it shall not be for me. Those who live by the sword will perish by the sword. They will drink their own blood and eat their own flesh.

Our venerable ancestors taught us that there are certain trees in the forest that you do not dare to cut down. You will die in the process of trying. “Touch not my anointed and do my prophets no harm,” says the Lord!

Before heaven, I stand by my testimony, knowing, as the English playwright William Shakespeare declared long ago, that cowards die a thousand deaths before their time.

If I had desired the worldly preferments that our ruling elites would kill for, I would have kept my mouth shut. But I dared to speak truth to power because my conscience will not allow me to rest. Because of the Joseph and Daniel anointing upon my life. Because of the heart-breaking suffering around me.

Most of the 1st Republic’s Northern Region is the Middle Belt. The voice and preferences of Middle Belters have either been totally suppressed or subsumed under the ruling minority Fulani aristocracy domiciled in the Arewa North.

The power, pomp and pageantry of this world leave me defiant and unbowed. I am, by nature, a very private person.  My happiest life is to stay alone in my study, consorting with the ancient sages while listening to Bach, Handel, Mozart, Beethoven, Schubert and Vivaldi.

I have vowed to follow the path of all the Eastern Stars, until I die. A priest forever of the Order of Melchizedek!

There is, if truth be told, a great disorder under the heaven. Things are not right. The omens are looking very bad. From Daura to Katsina; from Zamfara to Birnin Gwari; from Southern Kaduna to Plateau, Benue, Adamawa, Niger and Borno, thousands of innocent women, children and elderly are being killed by murderous insurgents, marauding bandits and genocidal herdsmen. The ogre is spreading across the Great River and threatening to engulf our entire country.

The other week, a woman from my homeland was on her way to her farm with her three children when the bandits set upon her. Her children were hacked to pieces before her very eyes. She managed to escape by plunging into the nearby river. She has become a mental wreck. Last Thursday, one of our chiefs was executed together with nine members of his family. The carnage goes on.

Some of my gentle readers may have seen the video clip of the near-naked young woman who was recently kidnapped by bandits and was being subjected to savage beatings. Amidst her wailing, one of her captors brought out a dagger and sliced her scalp into two like watermelon.

A great oceanic silence ensued. Heaven itself seemed to have stood still. This gory scene was not in Afghanistan or Somalia but 21st Century Nigeria. What is being enacted before our very eyes is an incipient genocide. The government seems either unwilling and/or incapable of stopping the diabolical wickedness. They are trying, it would seem, to fill up the blood banks for insatiable demons. 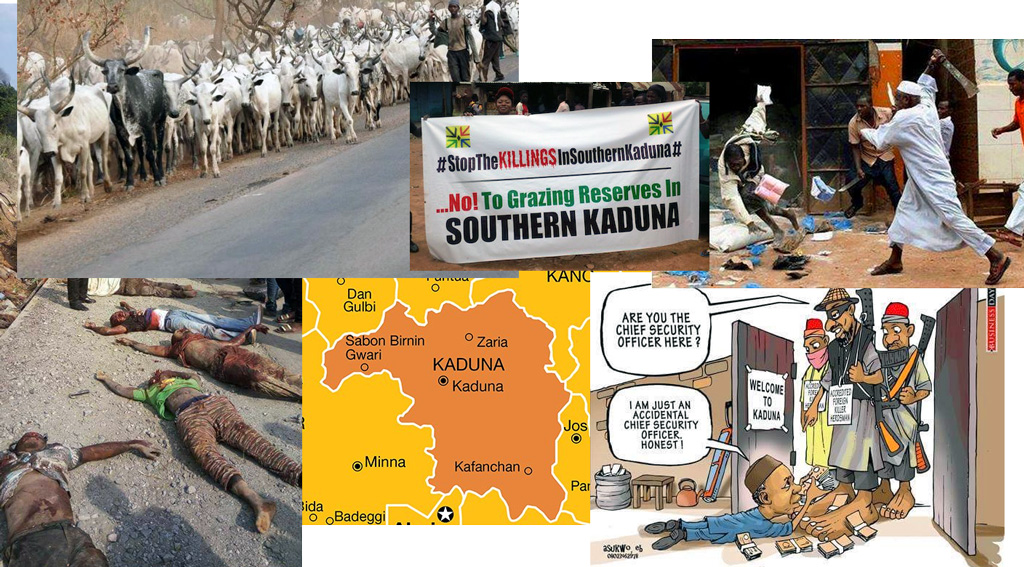 Indigenous ethnic nationalities inhabiting Southern Kaduna have been subjected to waves of mass killings by the Fulani herdsmen militia who trespass on their cultivated lands.

Political philosophers, from John Locke to Rousseau and Ibn Sinna, have taught that men consent to be governed only because of a pre-existing social contract in which the state protects the people in exchange for their obedience. A government that fails in that elementary ontological duty is in breach of the sacred trust of civilization. Without moral or political legitimacy, it can no longer count on the loyalty of its citizenry.

The Russian-Jewish émigré and Israeli parliamentarian, Natan Sharansky, has written a splendid book, The Case for Democracy (New York: Public Affairs, 2004).   In it, he makes a distinction between “free societies” and “fear societies”.

The state in a free society guarantees the life, liberties, livelihoods and security of all its citizens. Fear societies, on the other hand, are governed by fear, arbitrary highhandedness and repression. Nigeria has become a society governed by fear — over which an ominous culture is gathering like a mushroom cloud.

Some of the neofascists have cast aspersions on my family and origins. I come from a long line of ancestral warrior-kings among the ancient hills and warm springs of Sanga land. My late parents were evangelists.

We are part of the great Nok civilization that traces its origins to the Egypt of the Pharaohs. We are inferior to nobody. Our ancestors were never conquered by the Fulani Jihad. I know every single one of my forebears up to the seventh generation.

And I know where their venerable bones are interred. I wish many of my traducers could say the same thing. Most are, if truth be told, the progenies of alien bondswomen. This is why they are fighting to take over ancestral homeland by force of arms — and why they kill with such bitter and venomous hatred.

If left unchecked, the wicked political agenda which former President Olusegun Obasanjo referred to not too long ago, is capable of destroying our country. We are, no doubt, heading towards an implosion. What I have done is simply to perform my duties as a watchman over the night. It was a clarion call for a moral rearmament – a wake-up call to those who love Nigeria and care for her future. For following the dictates of my conscience, they are now seeking to crucify me.

But I shall not deviate from my high calling. Millions may die if I keep quiet and do nothing. It does not take a seer to know that our ship of state is heading towards what the sage Chief Obafemi Awolowo termed a “rock”.

Our country is dying and some people are amusing themselves in a gaudy party like drunken sailors. They will have to answer for their follies at the bar of history. Sancti Apostoli; Ora pro nobis.