Aba Environmental Eyesore Has Worsened in Past Decades Under the Purview of Govs. Kalu, Orji & Ikpeazu

Maazi Ezeoke and the Njenje TV have turned their focus on the perennial eyesore that has become the second nature of the commercial city of Aba in southern Abia state, Southeast Nigeria. This writer participated in a video documentary of the Aba environmental nightmare in May 2005. On balance, things seem to be worsening instead of improving. The conclusion of the 2005 video is precisely the same with that made by Maazi Ezeoke and his crew in this latest update on the status of one of the important commercial hubs of Southern Nigeria.

As reported in the video, many looked up to Aba (a. k. a. Enyimba City) to grow into becoming the “Japan of Africa” because of the industry and ingenuity of domestic artisans who engage in the business of local manufacture of various consumer goods. Aba is particularly famous for mass production of clothes, footwear and fashion trimmings that are of export quality. Unfortunately, the expectations of Aba have not panned out as the scenes in Maazi Ezeoke’s video suggest. How can industrial manufacturing take place in the ambiance of environmental chaos, filth and disease as shown in the latest video of Aba?

It is not surprising that some hacks have been recruited to silence those who share and disseminate images of the Aba eyesore in social media outlets to heighten awareness of the public. This practice is not new. The preceding WIEF video released in 2005 was assailed for the same reasons. The eyesore can be normalized by simply not allowing anyone to talk about or raise any alarm regarding it. The typical Aba city resident has become desensitized to widespread unmanaged solid and liquid waste choking up the streets, roadways, highways, markets and public spaces. Filth has become such a constant feature of Aba that some city residents are instinctively joining in the pushback against those who repeatedly call for the sanitization of the Enyimba City, especially if those involved are perceived as outsiders. Some go as far as asserting that complaining about Aba eyesore is a variant of public criticism of the government in power at the state and local council levels.

The World Igbo Environmental Foundation (WIEF) had done a cursory environmental analysis of the Aba urban territory more than a decade ago and discovered that the underlying reason why the city is difficult to manage environmentally has a lot to do with the topography and soil quality of the area. Aba City is nestled on the banks of the Ogbor River which meanders through the flat coastal plain of southern Abia before entering the Atlantic Ocean.

The soil is loamy and thus quite porous and loose in consistency. With the heavy rainfall associated with the tropical rainforest vegetation of southern Abia and the high groundwater table, the topsoil gets quickly saturated. Natural drainage is sluggish because of the flatness of the land. So, flooding is commonplace in the entire area, even in the best of circumstances. When combined with the ubiquitous unmanaged solid waste that litter the city streets, markets and open spaces, the drainage channels are quickly clogged with debris resulting in the flooding of residential and commercial neighborhoods as shown in this video. 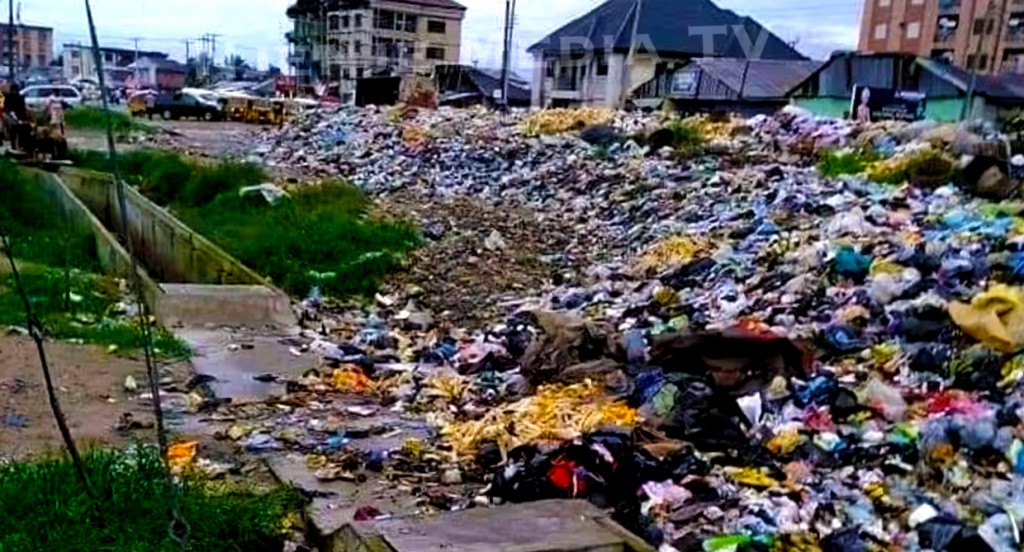 Aba city neighborhoods are choked with solid waste which collects along drainage channels, streets and roadways. Over time, an entire city neighborhood becomes a makeshift dumpsite with the many public health challenges involved.

WIEF also found out that the government has no interest to understand the underlying cause of the problem and preferred instead to engage in some cosmetic work at carefully chosen locations where political calculations compel such an emergency undertaking. Suffice it to say that this cosmetic work usually doesn’t survive the next rainy season or two.

It is noteworthy that the coordinated exposure of images of Aba eyesore is now compelling the Abia state governor to announce some initiatives aimed at improving waste management in the state, with special focus on the Enyimba City and the immediate drainage basin associated with it. From an environmental standpoint, it is essential to caution that solid waste management alone may reduce the complication somehow, but the underlying cause of the Aba eyesore remains unaddressed. WIEF discovered that Aba metropolis has not even a single designed solid-waste dumpsite. Contractors engaged in collecting solid waste from Aba end up dumping whatever they gather along the Aba-Port Harcourt Expressway. The government should not only be concerned about removing the trash that is choking up the city, but it must also prepare properly engineered dumpsites to properly dispose of the solid waste.

Maazi Ezeoke and his crew must be lauded for their essential service to the society in this and many other angles. They have effectively deployed the power of modern multimedia tools to better inform the populace in a society where investigative journalism does not exist. Maazi Ezeoke is now the people’s investigative journalist because those in the business of information management in Nigeria have other overarching priorities to take care of. Thanks to Maazi Ezeoke and others engaged in the thankless job that they are doing to improve the lives of their fellow citizens. That is the change we seek being delivered to our desktops in real-time.