Womenfolk Re-enact History by Leading Public Protest for Change in Aba: Are There No Longer Males in the Enyimba City?

This YouTube video on the Aba environmental eyesore by Maazi Ezeoke and Njenje TV is a sequela to an earlier one, which was republished on this platform at http://bit.ly/2mXVcAV. Another conscientious activist and an attorney had also produced another documentary on YouTube, which was also republished at http://bit.ly/2Oj58Ae. The tales from these two preceding videos sound all too familiar. The industrial/commercial city of Aba, which many adorably called the “Japan of Africa”, exists today as a mere shadow of what the Enyimba City used to be. Mr. Liborous Oshoma used his video documentary to accomplish three things. First, he was able to pinpoint the downturn to synchronize with the debut of the 4th Republic in 1999. Second, he clearly showed that the Aba eyesore is just the tip of the iceberg of an environmental and infrastructure decay that spans the rest of Abia state and elsewhere in the Southeast geopolitical zone. Third, he observed that indigenous manufacturing industrialists have since abandoned Aba to emigrate to resume their enterprise in faraway China, where the cost of production is cheap. The goods they manufacture in China are subsequently exported to Nigeria.

A new dimension is now introduced into the mix by the entry of the Aba womenfolk into the fray. Aba women successfully led a protest against what was deemed to be repressive acts of the British colonial administration against the indigenous population. The Aba Riots of 1929 were driven by women and featured notable agitators for autonomy and self-rule, such as Mrs. Margaret Ekpo and others. The women leaders of the era were very persistent in their demands until the colonial masters had no choice but to concede. With this antecedent, it is easy to appreciate Maazi Ezeoke’s excitement that the Aba womenfolk have finally stepped forward to add their voice to demand the immediate cleanup of today’s Aba ubiquitous eyesore by the Abia state government.

The Evolution of Aba Eyesore

It is uniformly agreed the steep decline in the fortunes of Aba metropolis and elsewhere in Abia state spans the governorship tenures of three individuals, namely: – Orji Uzor Kalu, Theodore Orji and the incumbent Okezie Ikpeazu. It is also agreed that there has been a worsening of the Aba eyesore since the debut of the 4th Republic. Many had believed that the Enyimba City decay was caused by the fact that the Abia state chief executives (a. k. a. governors) opted to neglect Aba simply because the territory does not belong to their home constituency. But the incumbent governor of Abia state hails from the Ngwa cultural subunit on whose ancestral land the city of Aba is situated and still, the downward slide continues unabated. In fact, things are said to have worsened during the governorship of a son of the soil, Governor Okezie Ikpeazu.

The historical landmark of 1999 was when the last of the military Mohicans that misruled Nigeria in the preceding decades decided to shed their military uniforms and become adorned with civilian garbs. The generals’ goal was never to relinquish power, which they had controlled in an absolute sense since the 1966 military coup that brought them into power. The last of the Mohicans, General Abdulsalami Abubakar, pulled a trick on the Nigerian political class by the issuance of Decree No 24 of 1999, which was subsequently baptized to answer the 1999 Constitution with which the 4th Republic is organized and run till date. The Decree No 24 of 1999 (a. k. a. the 1999 Constitution) was tailor-made by GEneral Abubakar’s junta for the continuation of the autocratic military dictatorship of the post-Abacha era under the guise of civilian democracy as demanded by the citizenry. The 1999 Constitution was created by the military establishment to enable their fellow strongmen to effectively rule over the country’s so-called “federal” democracy from a safe, secure and remote citadel in the Aso Rock Villa, Abuja.

Legal and constitutional experts have repeatedly slammed the 1999 Constitution as a fraud, which was never written and put into force by “We the People…” as claimed on the first page of the said constitution. The imposed constitution created the most powerful executive branch of government in the entire world. In comparative terms, the incumbent President Buhari of Nigeria, by far, wields more powers in the day-to-day governance of all the nooks and corners of the country than his US counterpart, Donald Trump, who can only govern according to clearly defined guidelines penned down by American founding fathers nearly two and a half centuries ago. The top executive president in Abuja is buttressed by executive governors controlling the 36 State Houses nationwide as mere extensions of the center. Local autonomy at the periphery was tactfully blockaded by the insertion of a 68-item federal Exclusive Legislative List in the imposed 1999 Constitution. The governors of Abia state could have abandoned the “God’s Own State”  to decay despite the monthly revenues collected for the people’s upkeep and there is nothing that the state’s stakeholders can do about it. The 1999 Constitution shields Nigeria’s president and governors of the 36 states from any judicial probes, charges, or criminal trial while in office. This is precisely why Abians could do nothing such as demand accountability from their past and present governors while the leading economic powerhouse of the Southeast is allowed to deteriorate to abject ruination. 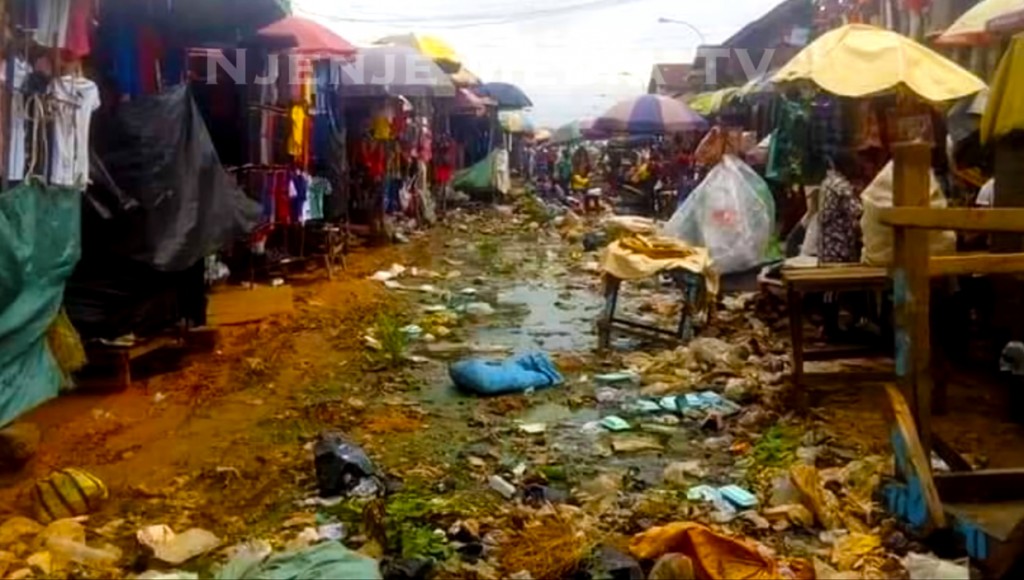 A scene in an alley in the local Aba market choked with solid waste massively contaminated topsoil. Edible staple foodstuffs are displayed and sold here for mass consumption.

The solution to the Aba Eyesore

It is heartwarming to see that the womenfolk of Enyimba City have resolved to join the quest to salvage the moribund industrial and commercial city of Aba. But all that Abians can do is to complain to the incumbent governor, Dr. Okezie Ikpeazu, to begin to do the needful to salvage Aba by first ridding it of the massive liquid and solid-waster pollution that have combined to deface the once-prosperous urban center in our part of the world. The governor and Abia State Assembly are powerless to make any long-term laws pertaining to the redesign of Aba or to seek the required external assistance, as needed, in accomplishing this because of the 68 individual items listed in the 1999 Constitution’s federal Exclusive Legislative list. Unfortunately, not many Abians are even aware of this constitutional constraint. If the women intensify their public protest, they can be given the “IPOB treatment” by ordering the Abuja troops to go after them in the fashion of Operation “Python Dance II”.

The Aba environmental eyesore has become an eyeopener for those who have, before now, regarded the disputed imposed fraudulent 1999 Constitution as a matter for legal bums and perennial self-determination agitators to deal with as they so desire. For one thing, the escalating degradation in Aba and elsewhere throughout the Southeast can never he slowed down, halted or reversed as long as the 1999 Constitution is allowed to reign supreme over the wishes of “We the People…”. Cities and large population centers all over the world are best managed locally with local laws made by the very inhabitants of the locations in question. The demand for a geopolitical restructuring of Unitary Nigeria has now ebbed in the post general elections era. The way things are shaping up, it appears that mere restructuring shall be incapable of sanitizing the massive fraud embodied in the 1999 Constitution.

An increasing cacophony of voices are now calling for a complete jettisoning of the 1999 Constitution and writing a brand-new one to replace it. For constituents of the Lower Niger, Yoruba and Middle Belt emerging federations, continued national unity can only be guaranteed by agreeing on a Federal Constitution that shall be modeled after the post-Independence federal constitution of the First Republic. If this demand is not fulfilled soon enough, the implosion of the rickety 4th Republic may become Nigeria’s last.