The issue of Fulani Herdsmen raising their cows in the age-long traditional manner of grazing along road and farmlands from the North to the South, East and West have, in recent years, raised a lot of concern. This concern is the result of the dwindling vegetation in the North, the ravaging of communal farms and their resort to the use of sophisticated military weapons to assert their so-called rights for their cattle to graze anywhere they chose, with the collateral damage of loss of lives, not only among the communities, but also of leaders of the communities and administrative officials. With the current insecurity of Boko Haram in Northeast of Nigeria, it has become very worrisome that such insecurity would spread to a majority of the states in the country.

Recently, various organizations, community leaders, traditional rulers, the clergy and legislators have appealed to the government of the Southeast to take some very drastic measures to curtail the incessant activities of the herdsmen which have led to loss of precious lives and destruction of cash crops in communal farmlands. Banning the activities of herdsmen alone is not a veritable alternative, especially in these days of economic recession and diversification. 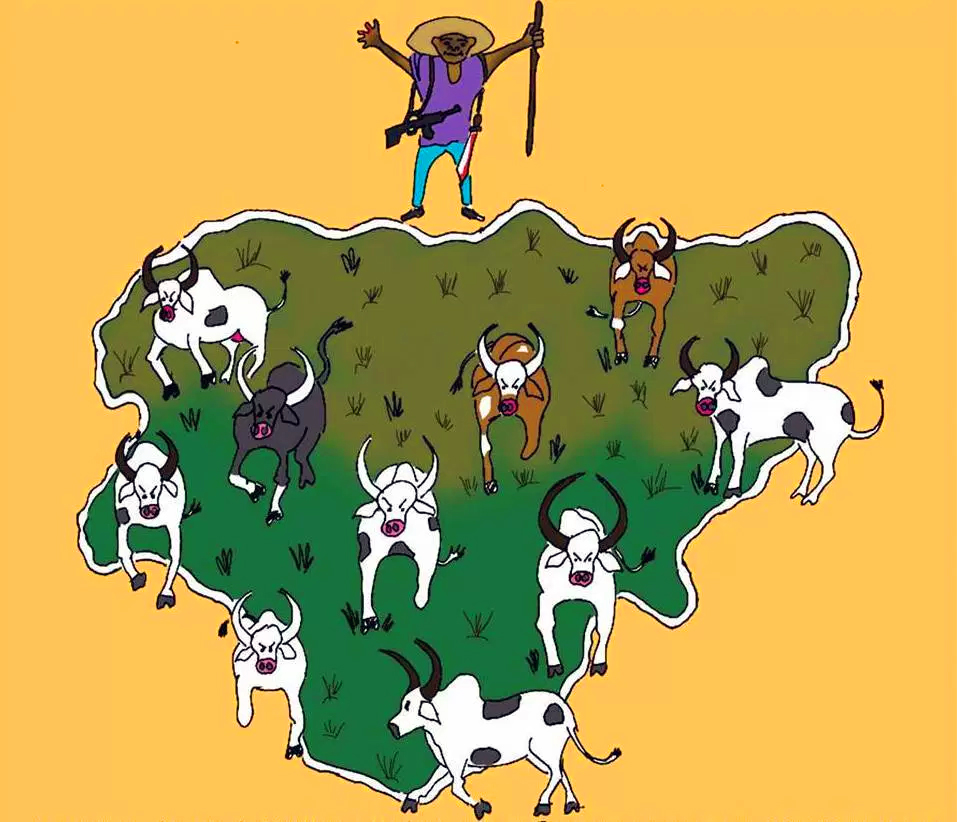 Fulani herdsmen terror army overrun Nigeria so as to clear the path for cattle breeding and marketing in all nooks and crannies of the country.

Each state government of the Southeast should immediately formulate a joint public-private partnership agricultural project in each senatorial zone for modern agro-animal husbandry. In the early days of former Eastern Regional government, communities were encouraged to raise our own native cattle which were well fed in domestic ranches and which were more nutritious and tastier than the malnourished cows which had trotted more than 1,000 miles to get to the Southern markets.

The state governments should ensure that they have good abattoirs in various locations for the slaughter and sale of livestock. These abattoirs could be supplied with livestock purchased in the North from their commercial owners and transported down South by motor trailers or railway wagons designed for such goods. In this way, there would be an immediate decline in the movement of herdsmen in all the nooks and crannies of the states in the South. We have indigenous cattle and sheep rearers who can take care of these livestock goods from the arrival point of the transportation and this will reduce the menace of Fulani long-distance herdsmen and their cronies within a short time; the behavioral patterns in this livestock trade will be regulated for the benefits of all.

Raising of cows, pigs, goats, sheep and bush meats, such as rabbits are very serious industrial ventures in the developing and developed nations. With agro-economics now being regarded as a serious venture for our domestic economy with the possibility of even export potentials, our Southeast government should now take a serious look at the agro-animal husbandry ventures in Europe, America and Asia to evolve a partnership that will be transformative for our Ministries of Agriculture. 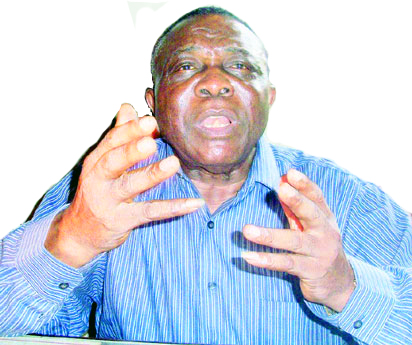 In these days of economic recession, it is very informative to learn that in the Northwest and Northeast zones of Nigeria, there is a rising trend of cow rustling; rustlers steal livestock like cattle in great numbers and take them to the bush or forest where they are hidden and protected with arms. In some cases, the security agencies have been able to release up to 2,000 cows or cattle from such rustlers. In one case recently, the armed rustlers who were ambushed, offered a bonanza of N5,000,000 cash to the operatives who collected the money and still arrested them as well as other rustlers.

So, it will be seen that the issue of Fulani cattle herdsmen has assumed a disproportionately high public visibility because of the raging economic problems in the whole country, which includes the North. The Fulani herdsmen who are bringing their cattle to graze in other parts of the country are not cattle rustlers or thieves, but are in charge of their masters’ cattle which they are accountable for.

Therefore, if the Southeast states and for that matter, other states assume and introduce the modern methods of raising livestock of different types with their business acumen as is found in other developing or developed nations, with their own domestic and business ranches, it is the intrinsic economic value which will dictate the preferable method of raising livestock. We know that it is not only the meat that is of value in livestock, we have other products such as milk, leather, bones and enriched manure for the farm that add value to the project.

For instance, the raising of poultry has moved from the household method of raising poultry and eggs for domestic use of a family to the modern industrial method of poultry industry which some states and businessmen, in cooperation with foreign investors, have embarked upon without even meeting the domestic demands in Nigeria. It is of late that the federal government has embarked on the restriction of imported poultry products, some of which are being dumped on the Nigerian market because of their low quality. 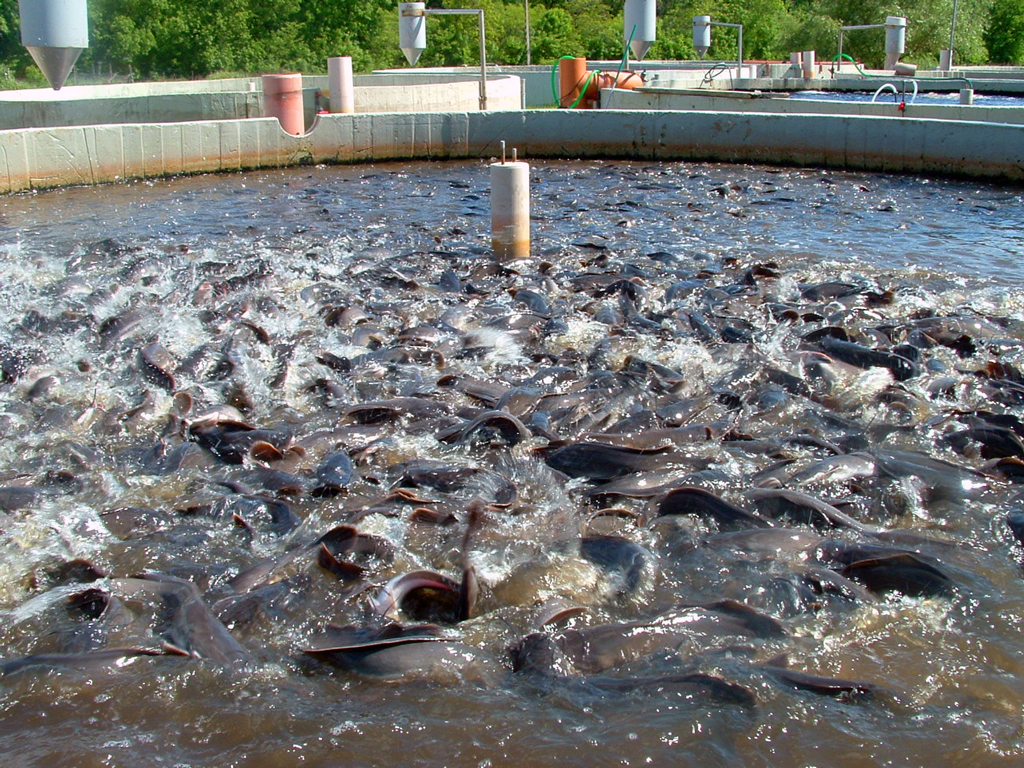 Pond in Nigeria full of grown fish ready for harvesting. Dependence on imported frozen “mortuary” fish or the very expensive dried stockfish from Nordic countries can be checkmated by replicating thousands of farms like this.

The same applies to aquaculture and the raising of fish in Nigeria. Nigeria has more riverine capacity than most countries in the world, yet our government have not been fast enough to develop the fishery industry domestically. Only a few state governments in the last 10 years had embarked upon the establishment of fish ponds and training our entrepreneurs, with the provision of soft funds, some of which are guaranteed by the Central Bank of Nigeria to develop our internal capacity to provide fish products for our domestic consumption. Nigeria spends a lot of foreign exchange, which is no longer available, for the importation of fish from foreign-owned fishing trawlers outside our territorial waters. They preferentially dump frozen herring on our markets while carting away more valuable seafood such as shrimps to distant markets in order to maximize their earnings.

There are, no doubt, some very vital government financial policies which are designed to add value to agriculture within Nigeria at affordable rates and with technical expertise for a successful implementation of these ventures. We, therefore, call on the state governments to take necessary steps in partnership with the private sector to enhance these agro-ventures as purely viable economic and commercial ventures which will definitely add value to the economy of the states and our communities in the current episode of diversification of our economy as one sure way of getting out of the current economic recession quickly.