All Indigenous Nigerians from the North, Middle Belt and the South Must Rise Now to Stop Buhari & Secure Their Ancestral Lands – Danjuma

Fulani Have Declared War Against Indigenous Nigerians & Are Grabbing Our Lands; the Game Should Be Up Now – General Theophilus Danjuma (rtd)

No election until this Fulani killing is stopped, lands grabbed restored back to the owners and the criminals identified, arrested and punished according to the law of the land. This pogrom must stop. Yes, it must be stopped. We did not elect them to murder us.

It is a big shame to about 165 million indigenous Nigerians from predominantly the Hausa North, Middle Belt, Igbo East and Yoruba West to allow only 3 million Fulani (who are Arab Africans) we had accommodated to take over Nigeria now and be killing everybody in the name of herdsmen and Boko Haram and with an agenda to take over our ancestral lands. Big shame to the rest of the people crying like fools. President Buhari’s primary objective to use Nigerian Armed forces, Boko and Fulani herdsmen to fight jihad and massacre the indigenous people and take over our lands and give to Fulani have started.

They have conquered Hausa. They’ve lost who they were. Now, they are fighting and killing people across Middle Belt (Kogi, Taraba, Plateau, Kaduna, Nasarawa, Borno, Benue, etc), sacking them from their communities and presidency is protecting and arming the murderers.

They have conquered the Southwest by half through the Tinubu dynasty. After Middle Belt, they planned to workover Southwest to gather strength to fight the Southsouth and Southeast. This will be the battle of Armageddon. It is a shame for indigenous Hausa, Igala, Tiv warriors, Idoma, Igbo, Yoruba, Calabar, Kalabari, Benin, Ishan, Urhobo, to name but few, to sit idly and watch Buhari destroy and turn Nigeria into a Fulani colony. This is a war against 165 million Nigerians declared by 3 million Fulani headed by Muhammadu Buhari. It is time to rise and stop Buhari and his gang of murderers called the Fulani herdsmen militia. He is their Patron for Life and his loyalty goes first to the Fulani in West Africa and the Arab world.

If you are a soldier, policeman, member of the National Assembly, professor, academician, governor from these indigenous 165 million who are being used by Buhari to destroy your ancestral inheritance and your people, you should be shamed and do everything now to stop Buhari. Because in the end, after using you to destroy your people, you yourself will also be destroyed. We must all say no to Fulani herdsmen destruction and stop them now. Miyetti Allah presently determines what happen in Nigeria’s presidency. They warn constitutionally elected governors of states, threaten destruction and the Nigerian Army supports them. This is not about politics; it is pogrom and ethnic cleansing by Buhari and his gangs.

Let the indigenous Nigerians rise now and say, enough is enough. Our soldiers should refuse Buhari and Burantai command and secure their people. Senate and House of Reps should stand up to their duties and stop this evil before Buhari destroys everyone.

Enough is enough. We are tired of mass burials of innocent people from across the Middle Belt who were murdered by Miyetti Allah and Fulani herdsmen. Their victims’ land is stolen and renamed.

It is time to rise up boldly against these killings and land grabbing and let us all say no to grazing route and planned illegal land grabbing by Federal Government to give Fulani Herdsmen in the name of open grazing and ranching. Ranching should be a private business, not a government business.

Let us all throw away our divisions and fight this war unleashed on indigenous Nigerians by President Buhari and his Fulani herdsmen militia in which he is the Life Patron. 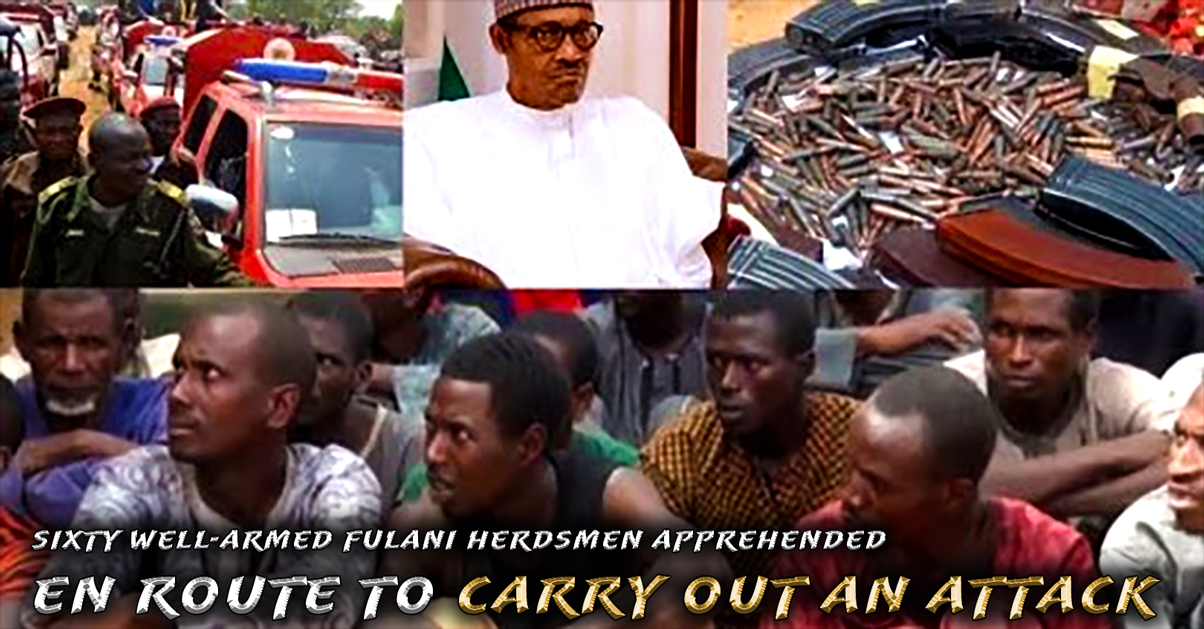 Pass this message on and share until the indigenous Nigerians and their leaders wake up and fight this war, and end herdsmen killing. They are not stronger than us. Our people in the Army, Police, Navy should rise against Buhari and his Fulani commanders of Nigerian Armed Forces. Share to save a life. Do not fear President Buhari, the killing squad in the Nigerian Army and Fulani Herdsmen. Do not be intimidated. They are not stronger than us. We gave Buhari our sovereignty and now, he has abused it and started to kill us and give away our ancestral lands to foreigners. We must take our sovereignty back now.

We cannot wait until 2023. It is too far. We must fear only God, not man. We have to be alive to be part of any election. Nigerians – 165 million Nigerians – must arise now to stop Buhari and his herdsmen and the Nigerian military who are killing the people who pay the taxes that are used to pay their salaries. The Fulani herdsmen militia and Boko Haram, which they are supporting, do not pay taxes because they are foreigners – “Arab Africans”. This is more than religion. Both indigenous Christians and Muslims are massacred under the supervision of President Buhari. It is land grabbing, first and foremost.

Please, share to, at least, 20 persons in your handle to save lives and save indigenous Nigerians from the North to the South, from the East to the West and your God-given inheritance – land, culture, faith, lineage and community. Both God and our ancestors will not forgive us if we do nothing over these murderers and criminal gangs ruling Nigerians now. After, join the movement to remove them and send them to ICC for for trial on charges for crimes against humanity. This is not politics or religion issue. It is a battle of existence.

Share now to 20 people for mass mobilization. The Nigerian Army is not protecting you. They are working with Fulani herdsmen militia even as we pay them salary through our taxes. It must stop.

We must reclaim our nation from Fulani by God’s grace and mercy.

It was republished as received.