The Cohesion That Nigeria Military Had During the Civil War No Longer Exists: Soldiers No Longer Inclined to Carry Out the Caliphate Agenda – Tola Adeniyi

The Fulani are not like any other ethnic nationality of Nigeria. Out of more than three hundred ethnic nationali8ties that comprise Nigeria, only the Fulani are not indigenous to the geopolitical territory. It is agreed that the Fulani are indigenous to the West African country of Guinea. But the semi-nomadic pastoralist group is thinly spread across the West African Sahel, from Mauritania to the Central African Republic. Some experts trace the Fulani origins to Northwest Africa from where they migrated into West Africa. Until the early 1800s, the Fulani survived in today’s Northern Nigeria at the peripheral edge of the indigenous society. But a Fulani radical Islamist cleric, Sheikh Uthman Dan Fodio, changed all that when the rabble-rouser started an insurrection that morphed into the Jihad of 1804-08.

The jihad first succeeded in the ancient Hausa city of Gobir in  Northwest Nigeria. The Hausa king on the throne was captured and beheaded. His throne was taken over by Uthman Dan Fodio who crowned himself the first Sultan of Gobir (renamed Sokoto by the Fulani). From Sokoto, the jihadist forces swept eastward overrunning the commercial hub of Kano and other cities like Zaria, Bauchi etc. The Sokoto Caliphate waged continual jihad to expand its influence into the Benue-Niger Valley and southward into the Yoruba city of Ilorin. The arrival of British colonialism put a stop to the Fulani military expansionism. But the colonial masters paid them back by imposing Fulani rule over all the nooks and crannies of former Northern Nigeria, even in territories that had effectively resisted the Islamic jihad assaults for generations. The born-to-rule mentality of the archetypal Fulani was created by the assurance of imperial Britain as a strategic partner.

The Fulani have used the imprimatur of the Sokoto Caliphate to dominate the geopolitical North and by extrapolation, the rest of Nigeria. Ahmadu Bello, the Sardauna of Sokoto, marked Nigeria’s 1960 Independence by cautioning his lieutenants to regard the new nation as the estate of their great grandfather, Uthman Dan Fodio. Indigenes of the Middle Belt should be considered to be “willing tools” of the Caliphate and the South should be looked upon as “conquered territory”. Rule over the North by Southerners must be resisted and subjects must not be allowed to take full charge of their own affairs. This 60-year-old script penned by Uthman Dan Fodio’s descendant, Ahmadu Bello, is the inspiration behind the policies and agenda of President Buhari’s administration.

It was in preparation for the full implementation of the Ahmadu Bello’s injunction that General Absulsalami Abubakar, a Fulani, used a military decree to impose the 1999 Constitution that foists a Unitary governance mantra over a supposed Nigerian federation as is the case today. In retrospect, the 1999 Constitution is the blueprint for the Islamization and Fulanization of the entire country which the Buhari administration is now being used to implement in such a brazen fashion. 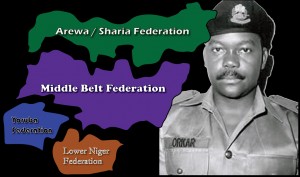 It is the backlash to Buhari’s policies that sharpened popular disdain for Fulani irredentism. This video articulates the emerging consensus in the resolve by stakeholders of Middle Belt and Southern Nigerians to frontally address the Fulani nuisance in our midst, once and for all. The South and the Middle Belt are implicitly embarking on the full implementation of the essence of the failed 1990 Gideon Orkar’s coup that mandated the summary excision of the Islamic Far North. Middle Belters are now seeing what their son, Major Gideon Orkar, saw clearly 30 years ago.