As Congenital Bandits, the Fulani Shall Keep Taking From Their Victims Unless Stopped With Violent Force

The Fulani were originally all Berbers. A slightly darker Arab tribe who Arabs treated with contempt. Most Berbers were forced to flee from North Africa by the full-blooded Arabs. Driven into the desert.

Arabs are not a monolithic people. They are made up of many tribes. Saudi Arabia alone has 35 tribes that do not understand each other’s language. Berbers are to be found in large numbers from Morocco to Libya. Tunisia, to be an IT powerhouse, managed to flush out almost all its own Berbers. Only 5,000 Berbers remain in Tunisia. There is a reason why Arabs do this.

The Berber-Fulah were expelled into the desert because they are vagrant, congenital bandits. A menace to any society. About a hundred years ago, even Ibn Saud, the founder of Saudi Arabia, forced the Bedouin and other nomadic tribes in Saudi Arabia to stay in one place. He, too was exasperated by their hit-and-run crimes.

Now, many Berber-Fulah forsook the harsh Sahara desert, drifting southwards. Shaped like the conical straw hats they adopted when they left the desert. Their conical ancestral huts are still to be found in the Libyan desert. The almost Arab-looking Fulani’s you see in Nigeria are the ones who have just left those huts and been smuggled into our public life to become rulers of Nigeria’s military and civil service.

The Kanuri too are an Arab-Berber clan who were forced into the desert by North African Arabs. So, they knew the Fulani predator game only too well. Now, in that moment of distress, the man who came to the rescue of the Kanem-Borno (Kanuri), was a person amongst the tribe of black Africans who the Berber-Kanuri met south of Lake Chad. Just like the migrating Kanuri met the black African Chibok people and others in what is today called Borno State. His name was al-Kanemi, a Kanembu.

Giving the usual lie and excuse, Usman dan Fodio claimed that Kanem-Borno must be attacked and conquered because Kanem-Borno was not practising perfect Islam. Meanwhile, Kanem-Borno had existed continually as an empire for 800 years. A settled people, though always drifting in whole, southwards of the Sahara desert, who knew Islam before the vagrant Fulanis stumbled upon Islam.

Al-Kanemi was amused by the claims of the parvenu Fulani. The Kanem-Borno (Kanuri) too are Berber predators who prey on black Africans who tolerate them and allow them to settle. Al-Kanemi famously argued with the aggressive Fulanis that Kanem-Borno (Kanuri) were just as Islamic as the Fulani were and did not need to be conquered by the Fulani to perfect their Islam.

In 2021, Yoruba Muslims are apparently working towards having Yorubaland conquered by the Fulani, so that the Fulani can “perfect Islam” for them. A sudden interest in Sharia and diverse acts of treachery against their own people.

Al-Kanemi was blunt. He told the Fulani their jihad was obviously a quest for territory and nothing else.

The Fulani remained adamant that Kanem-Borno (Kanuri) territory must be surrendered to them. 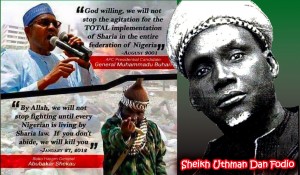 Sheikh Uthman Dan Fodio was the Fulani Islamist Cleric who inspired and led the Jihad of 1804-08 that overthrew the Hausa kingdoms of Northern Nigeria and took over the conquered lands till date. Buhari and Shekau are resuming the jihad in the tradition of the ancestral Fulani Sunni Muslim leader.

Thus, Al-Kanemi pacified the Fulani-threatened western frontier of the Kanem-Borno (Kanuri) empire. Not through dialogue but by violent force.

As congenital bandits, the Fulani keeps taking and taking and taking unless it is stopped by violent force. Has anyone ever heard or read of bandits anywhere in history who stopped coming back to raid their victims because they felt sorry for the victims?

Bandits never stop until they are forcefully resisted.

The Fulani’s foothold, its first sudden-ambush success was Sokoto, in 1804. The Berber-Fulani then spread out using guile and terror. Just like the Fulani is doing in South Nigeria today. By 1903, the Fulani had totally enslaved over 100 black African tribes in those areas of Northern Nigeria, now known as Sokoto, Zamfara, Kebbi, Katsina, Kano, Jigawa, Bauchi and Gombe States.

All the indigenous black Africans in those states were totally helpless slaves of the Fulani for 100 years. A Fulani could use his sword to cut off the head of any of them at any time, just for fun, and nothing will happen. They were utter and complete slaves. Employing mass-murders, sporadic rapes, capricious amputation of limbs and the most barbaric forms of cruelty, the Fulani drilled the fear of horse-mounted Fulani into these tribes.

Lugard observed that the only thing the Berber-Fulani did with all these black African tribes was to regularly raid their communities to hunt for human beings as if for animals. Human beings who the Fulani then sold as slaves to North African Arabs.

Lugard wrote to the Sultan of Sokoto in 1903, saying slavery had been outlawed around the world for almost a century and this had to stop.

The Sultan’s response to Lugard’s request was short: “Between us, there is only war”.

With just 400 men, Lugard left Lagos for Northern Nigeria and defeated the Sokoto Caliphate’s 35,000 cavalry and soldiers. Lugard promptly sent word as best he could to the over 100 different northern tribes that they were now free from slavery.

Though full of bluff, almost invariably, the Fulani loses frontal wars. Deceit, sabotage and the sudden-killings of their hosts in large numbers is the Fulani’s preferred way to fight a “war.”

That is why we in South Nigeria must understand that we are now at war.

It is not any special political wisdom. It is the simple stupidity and violent greed of the low-life bandit—congenital bandits. “More wants more” if the victims continue to allow it. The greedy bandit quite forgets that his victims may one day get fed up and lay ambush for him.

For as long as he is not forcefully repelled, the Fulani will continue to raid and steal all from whoever allows him.

That is why ridiculous weakling Fulani bandits take liberties like this in Nigeria: –

Just look at the control chart below:  –

The four major earners of money for Nigeria

The major spenders of money in Nigeria

Those “empowered to steal the proceeds of crime.”

We Are Making A Terrible Mistake.

On the contrary, the Fulani takes everything because he is congenitally stupid and, to his shock and surprise, has met with so, so little organized and effective resistance. The Fulani is a simple bandit.

Bandits have no morals and bandits have no sense of proportion. Bandits keep taking and taking and taking. Bandits become more emboldened if their victims do not forcefully resist them. Bandits will kill and kill and kill to keep stealing from their victims. That is the Fulani’s only plan. That is how the Fulani were able to keep the indigenous black Africans in Sokoto, Zamfara, Kebbi, Katsina, Kano, Jigawa, Bauchi and Gombe States for 100 years. Employing mass-murders, sporadic rapes, capricious amputation of limbs and the most barbaric forms of cruelty, the Fulani drilled the fear of horse-mounted Fulani into these tribes.

In 1894, an Englishman, William Wallace, who traveled through Fulani-conquered “Hausa” territory, wrote in his Notes on a Journey through the Sokoto Empire and Borgu, that “the founder of the Fulah dynasty, Othman Dan Fodio, left to his successors instructions, which they have found it expedient to obey, to allow these two tribes (bandit tribes) to continue their yearly raids in order to keep the unruly provinces occupied, and thus divert the minds of the Hausa inhabitants from an otherwise inevitable struggle to shake off the Fulah rule.”

Put bluntly, the official Fulani policy since they used sudden ambush to take over Sokoto in 1804 is to create a perpetual crisis in our lives. The Fulani needs that crisis, the state of poverty, to stop us from having the time to think of the extremely malevolent role the Fulani plays in our communities. 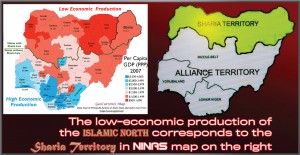 Nigeria has overtaken India as the poverty capital of the world. 80% of Nigeria’s desperately poor inhabit the Sharia Territory of the Islamic North.

The millions of okada riders who have plagued South Nigeria in the past 30 years are black African tribesmen from North Nigeria. They are not Fulani. They, too are fleeing Fulani oppression and madness in the north. In the process, they have turned their Fulani problem into “our Fulani problem”. They have turned our societies into an unliveable nightmare. All this has to stop. They are a terrible Achan in our societies. This is because, although they fled Fulani-induced chaos in the North, when they arrive in the South, they look up to the Fulani and do the Fulani’s bidding. They and their forebears were helpless slaves of the Fulani. On behalf of the Fulani, they will kill us in the name of Islam. We tolerate them at our peril.

When the Fulani says it “lays claim” to Southern Kaduna State, it expects the young tribesmen who don’t want to be killed to move to Lagos, Ogun State, etc., etc. There are more than 60 black African tribes in Kaduna State alone. They are too fragmented to fight the Fulani, so their young men flock to Lagos, speaking Hausa and changing the demography of Yorubaland.

One of the thousands of examples showcasing deliberate Fulani manufacture of chaos. Fulani vagrant cattlemen mounted a roadblock and started shooting sporadically at travelers in Yorubaland in February 2020. They had been doing terrible things before and have been doing worse things since. It is all deliberate. There is rejoicing in Sokoto, Kano and Daura when the criminals call them on mobile phones to tell the Sultan and Emirs what they had just done. Just as much as the amputation of the hands of Yoruba farmers, the kidnapping of Yoruba farmers and the wanton rape of Yoruba mothers and daughters is deliberate. It is an official Fulani Caliphate policy.

That is how the Fulani destroyed “Hausa” societies. William Wallace’s Notes on a Journey through the Sokoto Empire and Borgu is required reading for anybody who wants to understand why the Fulani should never be allowed to settle anywhere in Southern Nigeria. The Fulani is a pernicious harbinger of poverty, real deepening poverty, backwardness, death and total destruction.

Complacent and irresponsible in denial, just like Jews once were in Germany, we look on as a minority Fulani tribe of primitive low-IQ bandits threaten us with mass murder and annihilation.

Remarkably, the Fulani’s hare-brained claim is this simple. That although his people intermarried with black Africans in Fouta Djallon, the Guinea Republic before they drifted to Sokoto, he is superior to us because he has some “Arab” Berber blood in him.

The death of one Black man started #BLACK LIVES MATTER and the train of events that lead to the removal of racist Trump as the world’s most powerful man. Meanwhile, in Nigeria, the laughable claims of racial superiority by a despised half-Berber clan of dressed-up bandits blight the lives of 200 million Black Africans.

A wretched Fulani minority tribe of congenital bandits threaten us with the continued wholesale theft of our resources, with deepening poverty, death and mass murder.

Just then, the odious traitors in our midst say we must do nothing that we should just cower inside our houses and wait to be killed.

The World Is Watching.

If we do not forcefully expel the Berber-Fulani bandits from our lives, Black Africans all over the world will forever be treated with utter contempt.

If we do not outwit these simple bandits, posterity will never forgive us.