Following a flurry of inquiries from anxious members of the public, the  Joint Secretariat of NINAS wishes to inform the general public that the 42-state proposition being circulated as the Restructuring kite being flown at Abuja is the handiwork of one Ayo Akinfe and not the National Assembly of Nigeria as is being peddled.

The timing of this most dubious proposition thrown up amidst the countdown on the 90-day notice of grave constitutional grievances issued by the Nigerian Indigenous Nationalities Alliance for Self-Determination (NINAS) is clearly targeted at obfuscating the issues raised by the joint multi-regional NINAS’ Constitutional Force Majeure (CFM) Proclamation and at confusing the general public.

This ruse comes at a time when a vast majority of well-informed individuals across Nigeria agree and acknowledge that the totally unwieldy 36-state structure of Nigeria is unsustainable, and at a time the constituent component blocs of Nigeria, who are fed-up with the Unitary union of death Nigeria has become for their peoples, make their way to the exit door. This proposition of a 42-state structure emerges as one of those untenable propositions commissioned by the proprietors of “One Nigeria” who are still trying desperately to evade, once more, the inescapable sovereignty question that has been evaded by the proprietors of Apartheid Nigeria since the demise of the Federation of Nigeria in 1967. 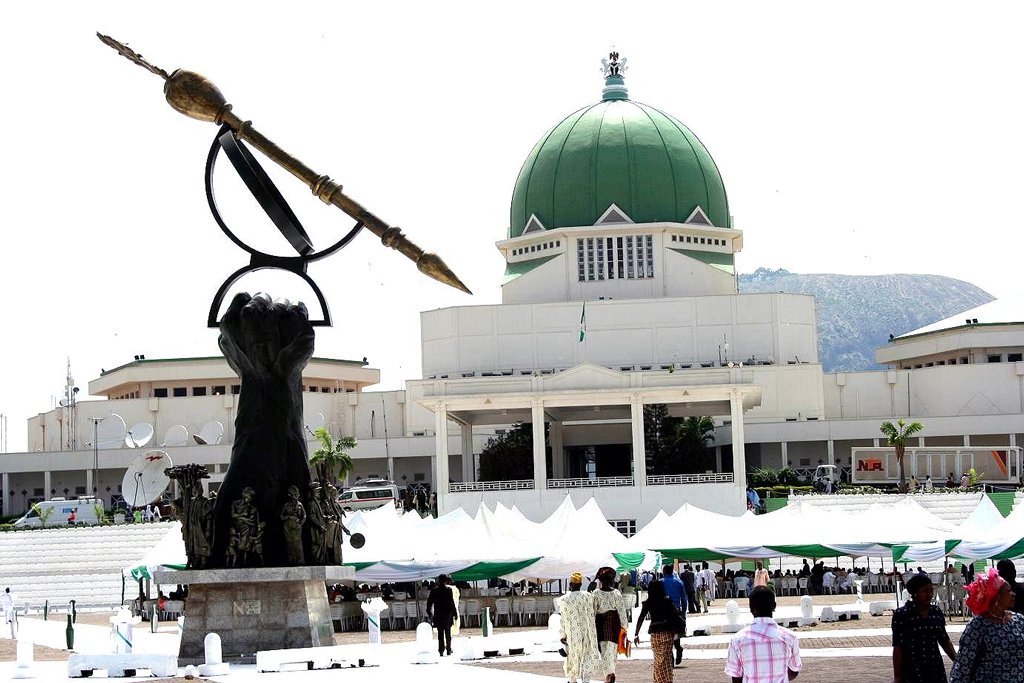 National Assembly Complex, Abuja – an emblem of today’s Unitary Nigeria that is imposed as a  replacement of post-Independence negotiated federal government.

NINAS completely rejects any proposition that is anchored upon the structures that were imposed by decrees and brigandage since 1967, especially the arbitrarily carved-out “states” as federating units for the Nigerian Federation, just as we (NINAS) reject the current imposed Unitary constitutional order as the basis of the distressed Nigerian union.

The union dispute raised by the NINAS via the December 16, 2020 Constitutional Force Majeure Proclamation, clearly spells out what the issues are and what the appropriate remedies are (both in CONTENTS and PROCESS), especially with the express adoption and incorporation of the November 16, 2018 “OPEN MEMORANDUM TO PRESIDENT MUHAMMADU BUHARI ON THE RESTRUCTURING DEBATE”, which provides details of the start-to-finish procedure for undertaking the inevitable fundamental reconstruction of the damaged constitutional basis of Nigeria within the context of the inalienable rights of the constituent component nationalities of the defunct Federation of Nigeria to Self-determination.

Pointing to the National Assembly as the venue for the resolution of the sovereignty question being raised across Nigeria is like trying to build a house from the roof instead of from the foundation. The National Assembly itself is a product of the imposed fraudulent 1999 Constitution and, therefore, a part of the problems that Nigeria has to solve now.

Some of the key questions that must now be answered by the current proprietors of Nigeria include:

(1) When did We, the constituent component nationalities of Nigeria submit our sovereignties, peoples and assets into the Nigerian union as claimed in the Preamble to the 1999 Constitution?

(2) When did We “make, enact and give to ourselves” the 1999 Constitution as claimed in the Preamble to that Constitution?

(3) How did We come about the 36-state/774 LG structure of Nigeria that threw up the atrociously skewed National Assembly of Nigeria that has imposed a permanent political majority status on a numerical minority stranger population?

(4) How did We arrive at the 68-item Federal Exclusive Legislative List that hijacked and confiscated into the hands of rogue Federal Government the key economic assets and powers of the defunct federating regions of Nigeria with a further 30-item Concurrent Legislative List that completely subjugates the so-called states of Nigeria to the rapacious Federal Government, even in those Concurrent matters?

Whoever wishes to understand the weighty issues at stake should find the time to read in full, the December 16, 2020 CFM Proclamation as well as the aforementioned November 16, 2018 OPEN MEMORANDUM TO THE PRESIDENT on the Restructuring Debate written on behalf of the LNC and it’s MNN alliance partners that birthed the Nigerian Indigenous Nationalities Alliance for Self-Determination (NINAS) in December 2018. (Guardian Newspapers of November 18, 2018 reported the November 16, 2018 Open Memorandum).

Let us realize that the issues at stake are matters of life and death representing grave existential threats to the indigenous peoples of Nigeria, especially in the South and Middle Belt (Alliance Territory) now confronted by an undisguised ethnic cleansing onslaught from an invading heavily armed Fulani terrorist militia masquerading as “herdsmen” with the open collusion of the illicit Caliphate-owned “Federal Government” of Nigeria.

These are, therefore, not mere academic exchanges for the purpose of debate. Let us, please, be guided accordingly.