APC’s Case at the Electoral Tribunal Is Hopeless.

Democracy, as proven even by the last election in America, is a journey of continued refinement which process neither starts nor ends with voting, but requires other actions.

One of these actions is seeking judicial intervention in instances where democratic standards fall short. Of all politicians in Nigeria since 1999 and in fact, even since Independence, from all available records, none has surpassed H.E. Atiku Abubakar in this regard – astonishingly, the person who comes closest is his running mate in the last election, H.E. Peter Obi.

Coincidence? I would think not – both men have a history of seeking intervention in aspects of the democratic process via the third arm of any democratic government – the Judiciary.

Funnily, cases by both men usually lead to landmark democratic norms, many of which we take for granted today. The first of these cases from the Waziri was towards the 2007 presidential election when then President Olusegun Obasanjo decided that he could no longer work with VP Atiku and internally declared his office vacant – going further to stop emoluments, fire his aides etc. The thinking behind this seemed logical: every Vice or Deputy is usually nominated by the top of the ticket – so, therefore, once the top becomes tired of the person he nominated as the running mate, he can simply dump him or her.

But Atiku approached the Court of Appeal (CoA) and won. The position of the CoA was also upheld by the Supreme Court as they both declared that the VP or any Deputy could only be removed from office by impeachment.

Had Atiku allowed that illegality to stand, it would have become our norm today with governors removing their deputies. Towards the same 2007 election, INEC, acting under the teleguidance of Aso Rock, decided to disqualify Atiku as a presidential candidate in the election on the platform of the Action Congress, based on a concocted report.

Atiku again approached the court and got a judgment. That judgment today is also landmark: INEC has no powers to reject any candidate validly nominated by any political party and fulfilling the constitutional requirements only.

It’s almost unthinkable today, but back then, INEC did overreach itself until Atiku went to court. Then they charged Atiku to the Code of Conduct Tribunal, he approached a High Court to clarify whether the immunity of the office he then held covered such matters. From the High Court to Appeal to Supreme Court, it was back to back victory.

This is the standard today. Under President Goodluck Jonathan again, Atiku helped to shape and deepen democracy when the PDP leadership at the time (as was normal with most parties then), decided to choose its next leadership by consensus and without going to a convention to ratify the consensual process. Atiku took the party to court to seek clarification and the courts upheld his argument: even if you’ll choose leaders of a political party by consensus, it must be done at a convention convened for the purpose of electing leaders of the party.

Again, this is the norm today. Four landmark cases from Waziri alone, ignoring several others, including his brilliant legal challenge of the election of President Umar Musa Yar’Adua which led to the electoral reforms from 2007. 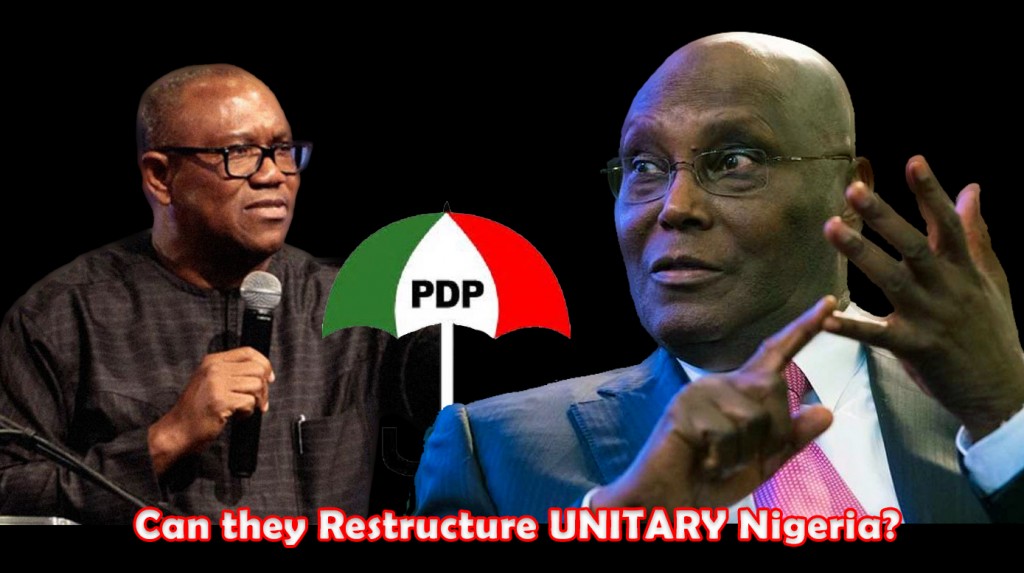 The joint electoral ticket for PDP presidential contest are eminently qualified. But can they Restructure UNITARY Nigeria? Atiku & running mate, Obi have gone to the Electoral Tribunal to recover their mandate stolen by the INEC and given to President Buhari.

Left to Buhari and his clumsy lawyers that year, it’ll have been bungled. Buhari came second in that 2007 election but his legal defense was woeful – lawyers were openly sabotaging his case, his running mate/party chairman openly denied most of Buhari’s assertions, immediate past ANPP governors and key supporters took appointments in the PDP Govt. It was a very woeful challenge from ANPP – the funniest part was when members of the party went and burnt the HQ of the party where documents to challenge the case were kept.

But thank God for Atiku – who came 3rd after only being allowed to stand for elections that same week. Their arguments were so brilliant that the court agreed that UMYA’s election was flawed, but taking victory from him at that point could possibly lead to chaos.

The 2007 election was the first ‘successful’ civilian to civilian transition – all others before ended in a fiasco. Atiku again headed to the Supreme Court (with Buhari’s fumbling lawyers also tagging along) and PUNCH newspaper captured the major argument of Atiku in its timeless headline:

“Heaven Will Not Fall…” – referring to the fact that of UMYA being removed based on flawed elections. That robust challenge led to UMYA himself admitting that his election into office was less than democratically satisfactory and his kick-off of electoral reforms which 12 years after, APC has abandoned and thrown Nigeria back into the era of rigging and figure manipulation. Away from Waziri though, let’s examine Peter ‘Okwute’ Obi:

He went to the Electoral Tribunal as the APGA gubernatorial candidate in Anambra after PDP had been declared the winner with Chris Ngige and in what was then still a rare occurrence, he got back to back victories – very quietly. Okwute pursued that case from 2003 till March 2006 – and became one of the first in Nigeria to win their mandate back from a rigged and flawed electoral process.

Then in November or so of that same year 2006, a kangaroo impeachment process removed him from office. Obi went to court again and after a few months, he was restored to office.

Both of those matters have become landmark constitutional/procedural norms today in our democracy – you can win your mandate back in court and if you’re illegally impeached, you can upturn it. By 2007, INEC insisted that Obi’s tenure as Governor was up and that it would conduct elections into the office of the Governor of Anambra.

I know a few “legal luminaries” who backed INEC on that stance – one of them is leading the APC charge today in fact – it was faulty. Obi went and told the court that his 4-year tenure had only started in 2006 and would end in 2010: the courts saw reasons with him and upheld his case all the way to the top.

Funnily, whenever Obi went to court, he often lacked press coverage but always fought diligently. Today, we take many of these things for granted and do not give enough credit to the idea of democratically challenging elections in court – some voters want to move on quickly after voting.

In like manner, we also do not give enough credit to both Waziri and Okwute for these. The 2019 presidential election petition by Atiku is a legal masterpiece that efficiently places on record the electoral fraudulence that happened on February 23.

I haven’t read the full response of APC but the headlines emanating from it indicate that the APC case is hopeless. One of the PDP grounds against the declaration of Buhari is that Buhari did not present/does not possess a WAEC certificate.

INEC Chairman, Yakubu Mahmood, is graduate of Uthman Dan Fodio University, Sokoto – the ivory tower of the 200-year-old Islamic Caliphate fully controlled by the Fulani aristocracy. He specialized in political history of Nigeria.

APC then decided to claim that Atiku is not a Nigerian – the smirk on Waziri’s face in this picture is the perfect response to such a thoughtless counter. Only thing Atiku needs to do to prove his citizenship is present his Nigerian passport or such other documents.

Only thing Buhari needs to do to prove that he has WAEC certification is to present his result or such other documents.

And we all know who doesn’t have what. So, for us, it’s back to the trenches: and not just for Atiku, but also for the deepening of the democratic process.

The election matter should be kept on the front burner by every PDP/Atiku supporters and indeed, all Democrats.

This is a charge I am prepared to lead quite happily. APC was built on the back of several judicial challenges of election results – PDP must follow the same route.

Any discussion that either legitimizes the fraud of February 23 or makes it seem like APC has got away with rigging, count me out; we are in the trenches again for Democracy. If you’re yet to study the PDP petition, please, download it and do so: it is extremely detailed on a state-by-state basis and explains where and how PDP votes were stolen by INEC officers and given to the APC.

I’m all here for this and I’m confident others are too.