As Tree Leaves Change Color in America: Nnewi on My Mind…

Every Autumn season, as tree leaves start falling and cool winds begin to blow, I become very nostalgic. I find myself thinking about the place I grew up in, the town many call Anaedo, the place called Nnewi.

The Autumn season, with its attendant cool winds, reminds me of the beginning of the harmattan season in the land of my fathers. Harmattan also heralds the onset of my favorite season – Christmas.

Nostalgia takes me down memory lane, through the Nnewi of yesteryears; the hometown I knew as a little boy, the one I grew up in as a teenager and then, a man. That’s it – the quaint town of decades past with pristine surroundings dotted by refreshingly inviting landscape of greenery and trees of assorted nature – udala, ube, ube okpoko, ugili, oji, okwe, usuke, mangolo-oyibo and mangolo-igbo.

Then, Nnewi was serene and inviting. The people were very friendly and welcoming. If you visited friends or relatives, even if the visit was unannounced, you still got the utmost receptions – roasted maize and pear (oka na ube), afufa, oji, ose oji and okwa ose. Those were the days when elders welcomed friends with ite otu or ekwekpu, filled with original and home-brewed palm wine (ngwo) devoid of chemical additives (saccharine) that have now soiled the innocence of the homebrew. 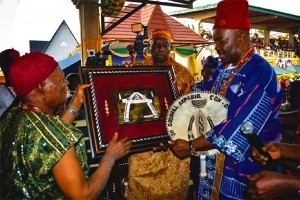 Igwe Kenneth O. N. Orizu III, the traditional ruler of Nnewi (seated on the left), receives a present from a guest at his palace in Otolo. The ruler shall soon celebrate his 95th birthday.

Life was good or so it seemed then. It was all Hakuna Matata, to borrow from the movie Lion King. The kids actually had no worries. There were no competitions then as to who had more money than the other. Kids were satisfied and proud of what they and their families had. As a result, serious robbery and get-rich-quick schemes were practically alien to the town. The villages were safe. Neighbors looked after one another and the kids freely roamed the dusty pathways and every time it rained, they indulged in the rain dance we called igba ogogo mmili.

I would set out, on foot, from our house in Okpunoeze, Uruagu and head to Umuezena in Umudim, with my little brother, Nnamdi, in tow to a funeral ceremony (akwam’ozu) just to behold the “magnificence” of the many masquerades like Odogwu Izeji, Nwansi ndi Umuezena, Odogwu Bob Ike, Ikedinaodogwu Nde Ngbu Otolo, okpoka ndi Edoji, Ozokwamkpo and Ajukwu. The funeral ceremony grounds were always dusty and it seemed like every time we went to one of those, one would go home with a cold (azuzu). We did not mind the effects of the cold because it was always fleeting. Still, the general precaution, to minimize it, was to cover our nostrils with handkerchiefs while watching the masquerades do their thing inside the dancing arena (ogbo egwu).

As kids, we were not always allowed into the dancing arena for fear of being stomped on by the more manly and imposing adults, dancing to the melody of the masquerade songs. Mmodile, the charismatic World War II veteran from Uruagu, who was always invited to funeral ceremonies to keep the peace and maintain order, was always on hand to show the kids out of the dancing arenas. Part of his charge was to ensure that masquerades did not stay in the dancing arena past their allotted time. I have heard him, on one occasion, say that he fought during the Second World War in Burma. He called it “agha Burma” (the Burma war). I guess he served in Burma.

Aside from the display by the many masquerades that grace such funeral ceremonies, umu-okpu, of the bereaved family, were always on hand to sing the deceased’s praises through a performance called “itu ukwe”. “Nnamo-o”, they would say, as they firmly stamp their feet on the dusty ground. With the picture of the deceased picture firmly held in one hand, they would gracefully gyrate their waists while moving their hands and feet in a synchronized and elegant fashion. “Nnam oyoyo”, others would say while stretching out the picture in their hands for further viewing by curious visitors. Guests would sometimes drop some money in the plates they carry, in appreciation of the mini entertainment. It was fun to watch. We loved life and were very happy indeed.

The end of the school year, at the St Mary’s school, used to be in December. There was a short song that kids sang about the end of the school season. It went something like, “December, ndi n’ochi, ndi n’akwa”. It meant that during the December period, some kids would be happy and smiling while others would be unhappy and crying. We got our final report cards for the year in December and in January, those who passed would go on to the next class. It was always emotional as we would gather in the assembly hall, excitedly awaiting the slow but majestic entrance of the school headmaster. He would walk into the hall and, after the necessary end of year announcements, begin calling out the names, by class, of the top three students in each class. Subsequently, others would go to their various teachers to get their report cards. Successful ones would be all smiles (ndi n’ochi), while those who failed would be crying (ndi n’akwa). Getting a good result means that one would have a good and happy Christmas season. We always raced home to break the good news about doing well in school for the year and then begin to ask for Christmas clothes, shoes, hats and knockouts (firecrackers).

So, as Christmas comes again…., I am nostalgic. As Autumn season force tree leaves to change color and eventually shed, as autumn cool winds begin to blow, Nnewi still resonates on my mind in spite of the many changes my beloved town has undergone.