Benue Igbo Indigenes Mocked, Marginalized for Identifying with Biafra During the Civil War

Exploitative Enslavement: The Agony of Over One Million Igbo Indigenes in Benue State

Gone are the days where we don’t know where Igboid communities are hidden. I have now put Anioma, as one of them, on the map for future reference. They are found in 4 local government areas of Benue State namely: Ado, Oju, Okpoku and Obi LGAs all in Benue State. These are ethnic Igbo. These are known as the Umuezeokoha people. Some people were speaking about Igbo trying to annex other people’s land, but look at how sizable amount of Igbo were cut off and placed in the North as Northern communities.

Presumably, some people hoped that the Umuezeokoha people will lose their identity as is happening with some Ikwerre people in Rivers State. Umuezeokoha community is in the present Benue state and comprises of over 300 villages of Igbo-speaking areas. Ado, Oju, Okpoku and Obi are local government areas that are part of the newly-proposed Apa state that the Idoma have been calling for.

Apa state must be obtained and added to the SE in the interest of unifying the peoples with their kith and kin in the SE.

There are over one million of them spread across four local government areas of Benue State. You can find them in Ado, Oju, Okpoku and Obi, all in Benue State. They are ethnic Igbos. Before the Nigerian Civil War, they lived a happy and meaningful life, mingling freely with their kith and kin in the state. But today, things have fallen apart.

Instead of joyful songs that they were used to, they now sing dirges. The Benue Igbos who are called by the Ndi Umuezeokoha are not happy that they have been neglected for a long time now by successive governments, federal, state or local, and they are blaming this on their ethnic origin and the fact that they are in the wrong state.

Interestingly, the people share the same Benue South Senatorial Constituency with Senate President, David Mark. Though Igbos, the Umuezeokoha people due perhaps to accident of history, are found in Benue State instead of Ebonyi State, being the closest Igbo state where their kinsmen, the Ezza Ezekuna kindred are found. 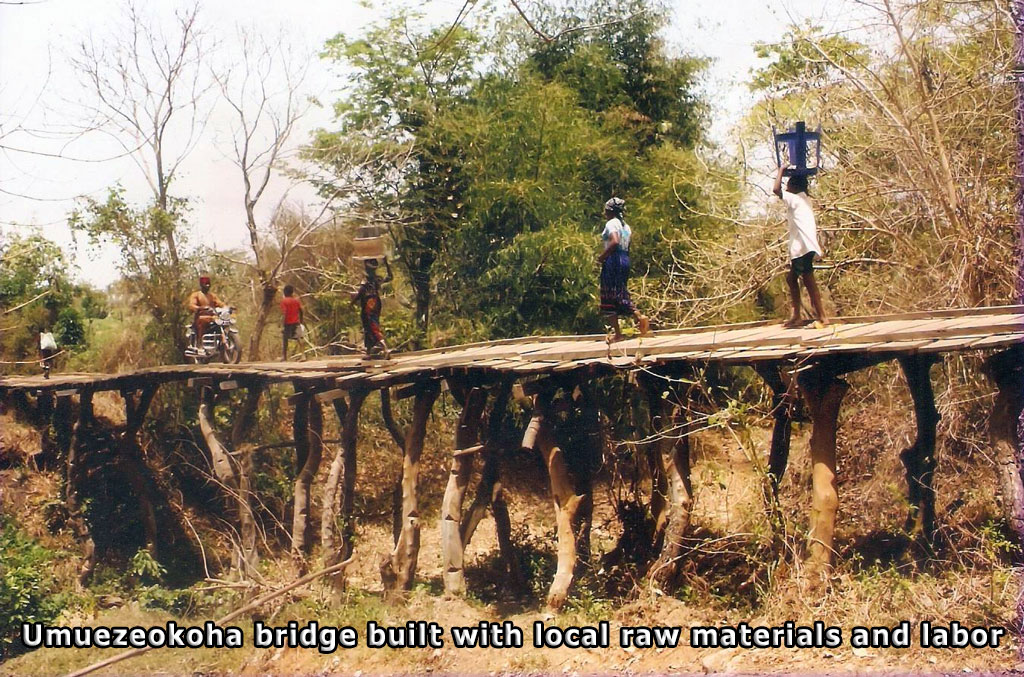 Wooden bridge linking two communities which are separated by a wide storm-water drainage channel which is filled to capacity in the rainy season.

According to the President of Benue Igbo Development Union (BIDU), Mr. Nweke Cedrick Ifeanyi, his people are wallowing in poverty and neglect and are often denied democracy dividends, including obtaining local government identification letters for employment in and outside the state. Rehashing the historical background of Igbos in Benue, Mr. Nweke said that the Benue Igbo; particularly those in Ado, Oju, Okpoku and Obi Local Government Areas, were in existence long before the advent of Christianity in Nigeria. But since then, he lamented, they have not been recognized by successive governments both at the state and federal levels, both in Ebonyi and Benue states

“Although before the Independence and the Nigerian Civil War, which lasted for about three years, we used to experience government attention to the extent that the missionaries then established one local primary school at Umuezeokoha community which comprises over 300 villages of Igbo-speaking inhabitants that time. The school was generally accepted by our elders then and we did witness medical attention. But since the Civil War, we in the entire 300 Igbo-speaking villages in Benue State have been dumped by the Nigerian government. It is worse for those in Benue South Senatorial District. We have never experienced any government attention, let alone a project from the local, state and federal governments up till date.”

The Igbo Union President also disclosed that a place with a population of over one million people has no designated political ward, no councillorship representative neither at the local government level nor at the state government level despite their voting population. He said even Senator David Mark and Governor Gabriel Suswan have been winning all their elections in the area.

Mr. Nweke also narrated how their children die in their large numbers because of lack of immunization, which he said they have never witnessed since the return of democracy. He also painted a gory picture of how they were swindled of N6,000 each for insecticide treated mosquito nets, which were given free to neighboring communities by the federal government.

“We are lacking so many things, including a health centers, political wards, good roads, good water, and electricity. There is no salary earner in our place to the extent that the mosquito treated insecticide nets given freely by the federal government was sold to us at the rate of N6,000 each, some even paid without claiming it till date,” Nweke said.

“All our roads are narrow; we do not have any motorable road in our area at all. Last time when we visited the local government chairmen and complained about the issue of selling mosquito nets to us, what they said was that the era of mosquito nets had come and gone. This attracted exchange of gazes, and the question whether we are still a part of this country. Imagine as we are in this dry season, we hardly see water to drink, wash and cook, talk less of taking bath. Before we see water to do something, one has to trek up to 30 kilometers to a place where there is unpurified dam water, but in this place, you must queue up in a line before it will get to your turn”, he said.

Another member of the community, Chief John Nwali, also narrated the ordeal of the people in the hands of successive governments in the state adding, “Sometimes we do lament whether we are different from other human beings created by God. Some of them that claim to be natives of the state mock us by telling us to wait to benefit from government only when the Biafran nation which we fought for comes into reality.” 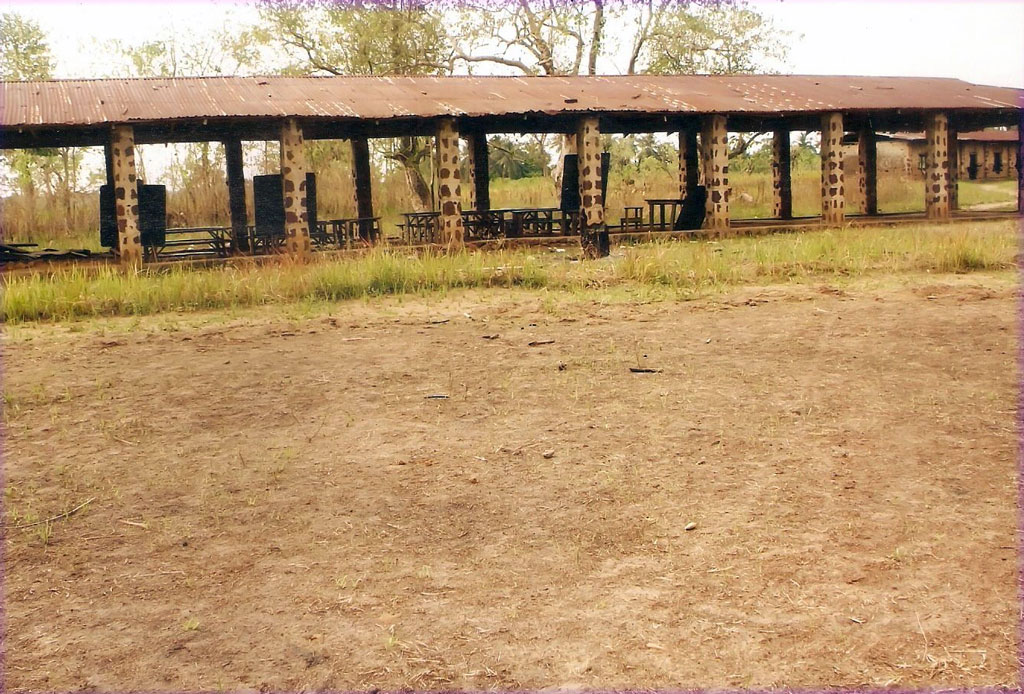 School constructed by the Christian Missionaries in 1942 at Umuezeokoha in Benue still remains in its rudimentary stage 75 years after construction was initiated.

“At times, we nurse the idea of belonging to another country. In fact, if we are close to another country, we could have declared our intention to become their citizens, but this one we are in the hinterland of Nigeria, we speak Nigerian language and practice Nigerian culture and religion. In every election, we vote and still we are treated with great scorn and neglect as if we do not exist. Yet, we have somebody like the Senate President, David Mark, living in Abuja with our mandate.

Even in the last 2011 general election, I was the PDP Campaign Coordinator for Benue Igbo branch, but since that time till now, we are still in the same condition. We have been regarded as slaves in the country of our own. Even the only primary school that was built by the missionary before Independence is no more attracting government attention. The school is now in a sorry state. The only secondary school we have as of now is one at Saint Charles Catholic Church at Apa Ogbozu community, which was initiated by one Reverend Father.”

“We do not have anybody in the Benue State Government cabinet both in the local, state and in federal levels. We are all confused on what to do and where to go because we do not know when this indefinite discrimination will come to an end. Things have worsened to the extent that the local government identification letters are no more being given to us any longer as Nigerian citizens.”

Chief Nwali also said that during rainy season, their people get drowned in water and disclosed that none of the streams, rivers and lakes has any bridge and lamented that during the last flood incident, they lost almost all their farmlands and every other thing they had labored for.

“The political oppression which we have been subjected to is very serious. Even one of the biggest rivers we have has not attracted government attention enough to build even a wooden bridge across it. Last year, more than 20 people died while trying to cross the river for their normal daily business. We made so many efforts to visit our former Governor, Gabriel Suswan and our Senator, David Mark, to table our problem before them, but all to no avail.”

An octogenarian, Pa Nwankwo Alo, said “Our children have not been immunized over the years, let alone included in the polio eradication programme. Our women do not even know what hospital is when they are pregnant because there are no hospitals to attend and yet we have up to 32 polling units. We have even called for more polling units because we are more than the present one but the government refused. During the national confab in 2014, there was nobody to speak for us.”

WE ARE REAL INDIGENOUS IGBO:

Unequivocally, Benue Igbo people are not known as farm settlers as some prominent Igbo men are going about broadcasting to the public claiming that we are only settled here for sake of farming.

Comprehensively, farming is our pride in relation to our kith and kin in Ebonyi state, namely: Ezza, Izzi, Effium and Ezzamgbo people. These people mentioned here are today the backbone of Abakaliki political block and also the farming strength of Ebonyi people. For more than hundred years ago, we have been in Benue state. During the civil-war years, Nigerian government used all its machinery against us in Benue here which later turned into futile pursuit and disgrace to them and still today, we are growing in numbers more than expected. Nigerian government, I think this is the right time to embrace justice and stop the political ostracism against the Benue Igbo. Although we have been facing a lot of unexpected harassment, we are firmly assuring you people that no amount of political deprivation or subjugation will make us to deny our identity as Igbo speaking-people of Benue state and we must forever remain resolute to achieve our political freedom…. 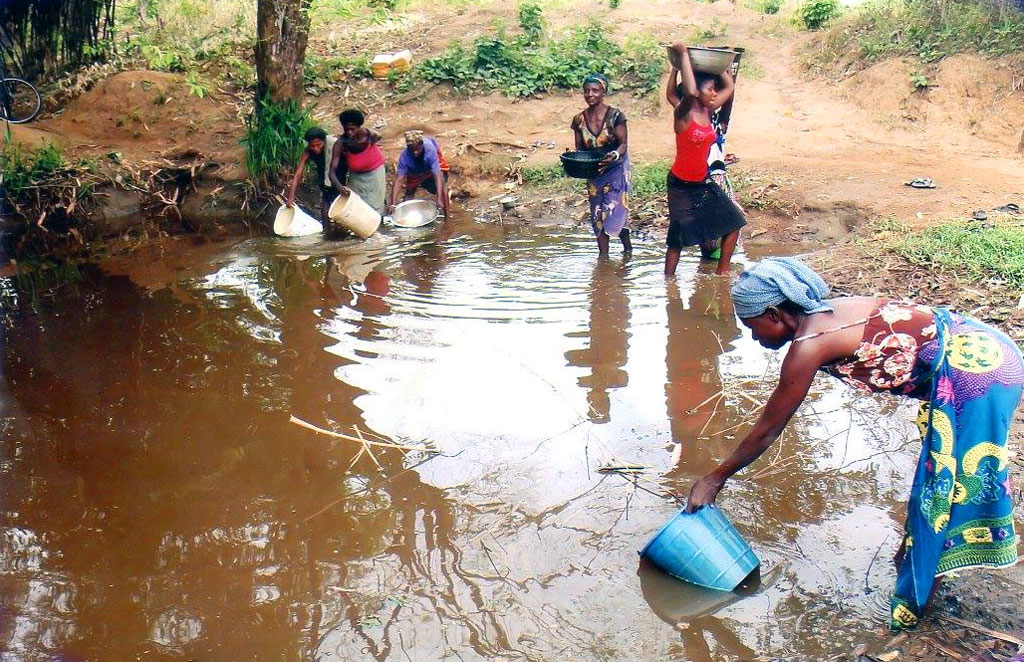 Igbo-speaking inhabitants of southern Benue walk for miles to this stagnant contaminated waterhole to fetch drinking water during the dry season.

People should stop misdirecting the public with messages full of deceit and shenanigans that we are farm settlers in Benue state. WE ARE REAL INDIGENOUS IGBO RESIDENT IN BENUE STATE.

(Article written by Okechukwu Okonjo on 13th October 2014 and edited by Ukachukwu Okorie.)