When the discourse within the Igbo hearth rises to the level of eliciting the input of the Umuada (Daughters’ group), it is time for all and sundry to guard their loins and begin to pay close attention. Some say that Ndiigbo operate a patriarchal society. It depends on what aspect one is focused on. In terms of moral authority in the typical Umunna (extended family unit), the Umuada, as a unified entity, are as potent as the menfolk. It is essential to note that complex and intractable disputes within the Umunna, village, or even the whole community tend to become amenable to resolutions with the intervention of the Umuada. That’s the Igbo reality. Igbo daughters are reared from cradle to understand that they have a voice, particularly in the extended families of their birth. When Igbo daughters wield their moral authority as “nwada Igbo”, their voice conjures a force that no sane person dares to overlook or disregard.

This YouTube video by Blessedom conveys the same message as the preceding ones made by the Daughters of Truth team. They host an online TV shows dealing with Nigerians matters, particularly as they interface with Ndiigbo and Igbo interests. The three Igbo daughters who jointly anchor the Daughters of Truth were very active members and sponsors of the Indigenous Peoples of Biafra (IPOB) before they saw the light. They arrived at their negative conclusions regarding the IPOB and its leadership tactics from the inside, as internal actors. Blessedom, on the other hand, has never joined the ranks of IPOB or supported the entity financially. The Daughters of Truth and Blessedom have been hands-on in the discourse and dissemination of information that contributes to the socioeconomic advancement of Ndiigbo wherever they are domiciled worldwide.

Blessedom understands that saying anything that detracts from the exalted image of the IPOB leader shall draw predictable instantaneous anger of the group’s multitude of foot soldiers online. Some believe that IPOB members are subjected to oathtaking as extra insurance to secure their loyalty, even at the point of death. Some believe that financial considerations play a major role in IPOB’s structural and operational design. The London-based IPOB is registered as a private corporation owned by Nwanne Kenny Okwu Kanu a. k. a. Nnamdi Kanu. By British law, IPOB is a bona fide personal business of Mazi Kanu. What no one seems to understand is how a privately registered company was made to become the mouthpiece of the Biafran peoples, including 70 million Igbo worldwide. Even more incomprehensible is how this same IPOB has become a magnet of death to a countless number of Igbo youths in the name of freedom fighting that is not going anywhere.

Is IPOB or its leader, Nwanne Kenny Okwu Kanu, in the business of freedom fighting? According to Blessedom, the Daughters of Truth, Mr. Tony Nnadi, Dr. Clifford Iroanya and a host of others who are in the know, the IPOB is a global franchise predicated on the exploitation of Biafra sentiments among the Igbo Diaspora to create a livelihood and personal wealth for the “supreme” leader and his goons. To create a semblance of legitimacy, fabricated tales of diplomatic breakthroughs via the United Nations (UN), European Union (EU) and some powers like the US, Israel etc were concocted and disseminated through the London-based Internet radio, which has served as the money-making machine for the IPOB franchise. Based on this fact, Blessedom recommends a radical defunding of this enterprise as the surest and fasted means of restoring sanity to the lead scammer from Afara-ukwu. 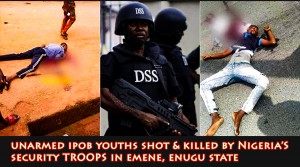 A gathering of IPOB youths, who are mostly of Igbo ancestry, engaging in nonviolent activities was attacked by combat-ready Nigerian security troops and many were killed, injured and arrested.

Both Blessedom and Daughters of Truth have used their respective platforms to call on the IPOB rank and file to understand the regional strategy being pursued by the Lower Niger Congress (LNC) and its MNN partners in the Southwest and Middle Belt. The LNC/MNN roadmap has clearly identified the imposed fraudulent 1999 Constitution as the cause of all the woes of today’s Unitary Nigeria. The Igbo daughters’ working team have since thrown their weight behind the impending Constitutional Force Majeure being orchestrated by the MNN Alliance partners in consultation with other indigenous ethnic stakeholders in whom Nigeria’s sovereign rights reside.

The heat being turned on now by the outspoken Igbo daughters regarding the IPOB and its leadership echelon can only be expected to escalate in the coming weeks and months unless something gives. It will be foolish for the IPOB members and their supporters to regard the groundswell of strident criticism emanating from the Igbo intellectual elite, especially the womenfolk, as a mere personal vendetta against their principal by those who are envious of Kanu’s “achievements”. Blessedom’s video has shown, beyond all doubt, that the Nnamdi Kanu-led IPOB has not accomplished anything of note toward the actualization of the self-determination quest of Ndiigbo, in particular, and the rest of Biafra, in general.