The National Security Adviser, Maj-Gen Babagana Monguno (retired), on Wednesday raised a fresh concern over the Almajiri system in the North, saying the country could no longer afford to sweep it under the carpet.

Monguno, who spoke at the launch of the National Security Strategy, 2019 by President Muhammadu Buhari, said the Almajiri issue must be addressed as part of the solution to insecurity in the country.

The new security roadmap is a revised version of the first strategy that was launched in 2014 to address present-day security challenges.

At the event, Buhari said that a safer, secure nation was the main objective of the Federal Government’s new security strategy.

He said this would be implemented through collaboration between all the security agencies and the ministries, departments and agencies of the government.

But explaining the strategy further, Monguno explained how evolving security trends called for the urgency to introduce methods different from what was applicable five years ago.

He cited how armed conflicts in the Sahel region had a connection with the insurgency, banditry and kidnapping affecting Nigeria, adding that in the Niger Delta, the emergence of criminal gangs, piracy and pipeline vandalism was also linked.

However, Monguno disclosed that embedded in the new strategy was a comprehensive approach to address poverty, healthcare delivery challenges and out-of-school children, particularly the Almajiri system.

He stated, “It addresses the current threats faced by the Nigerian nation as well as those threats that are anticipated to emerge in the near future.

“We have also proffered an appropriate strategy to address these threats which demand a whole of government approach in combination with a whole of the nation to achieve a whole of society’s approach in dealing with these challenges”, he said.

Citing how the Almajiri system could overwhelm Nigeria in the future, the NSA spoke in detail, “Rooted in the strategy are issues that may not be visible to the naked eyes but have tended to be malignant to cause greater problems to this society.

“Fundamentally, if we are going to take care of these problems, we need to try and safeguard the fast-growing young population of Nigeria. And guess what? We need to look at issues of poverty eradication and illiteracy. The issue of illiteracy is directly linked to the issue of children not going to school. This Almajiri phenomenon, which we have been talking about, we cannot continue to push it under the carpet. Eventually, it will come back to bite us in the butt, big time; we need to deal with this issue and it is the responsibility of all of us to try and take care of this issue without any inhibition. 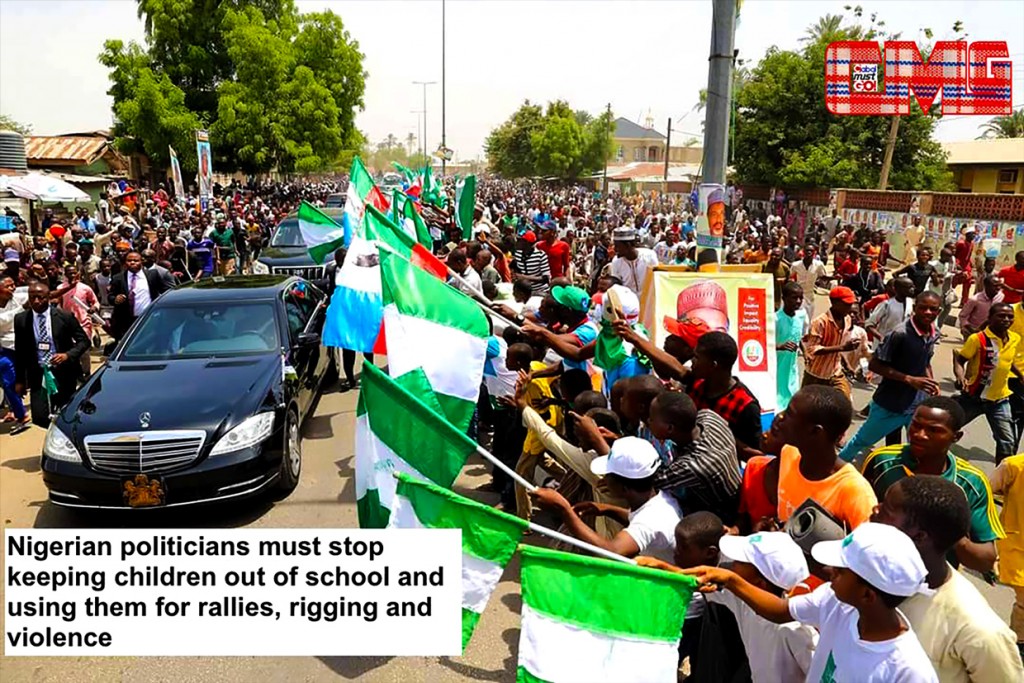 With a promise of food for the day, hordes of Almajiri homeless children and youths flock to political operatives who may then use them as thugs and rented crowds during electoral campaign rallies. These urchins are made to stash ballot boxes during elections in favor of who pays the piper.

“I will tell you one thing, the administration of President Muhammadu Buhari, in its pursuit for greater and enhanced security, will not allow itself to be blackmailed or handcuffed by the disarming philosophy of compliance with certain aspects that are socio-cultural in nature… We must grab the bull by the horns and deal with these issues.”

Monguno said the government had jettisoned the “state-centric” approach to security with the launch of the new roadmap.

On his part, the President gave a background to the new approach to combating security challenges.

He stated, “As we continue to work towards completely ending insurgency in the Northeast and laying the foundations of sustainable peace and development in the region, we are also addressing conflicts between farmers and herders, banditry and various forms of security challenges. In addition to security, economic diversification and fighting corruption, our administration’s priorities for the second term include pursuing improvements in education, healthcare and agriculture.

“These priorities reflect our commitment to enhancing the social security of Nigerians as a means of improving their physical security.

Meanwhile, prominent Nigerians, particularly from the North, backed the NSA’s call for urgent action on the Almajiri system.

Almajiris Can Cause Security Threat to the Nation – Emir

The Emir, in an interview with one of our correspondents, said the Almajiri system was a terrible situation that needed to be controlled before it went out of control.

He said, “If the system is left to continue, it will come to a time when those children will turn out to be hardened criminals, thereby causing security threat to the country.”

The emir said the system was an avenue of breeding criminals because children, who left their parents and came to urban areas for Quranic education, ended up learning all sorts of criminality.

On his part, the Secretary-General of the Arewa Consultative Forum (ACF), Anthony Sani, urged Northern governors to support the NSA in tackling the issue of Almajiris.

Sani, who spoke to one of our correspondents in Kaduna, expressed concern that the issue of Almajiris had been constituting security challenges for many years.

He said, “The world has now put the North as the hub of out-of-school children in the world. When you consider that Almajiris constitute a larger proportion of the out-of-school children who will grow up to become security menace, then you will appreciate the concern expressed by the National Security Adviser.