The indigenous inhabitants of Southern and Middle Belt Nigeria have always known that the cattle Fulani live in the bush together with their herds. The exact number of occupants of these Fulani bush settlements have never been of interest or concern of the indigenous peoples until recently. Before the Buhari administration, the Fulani settlements in Southern Nigeria were occupied by cattle herders and their households and little else. The Buhari presidency seems to have given a new aggressive impetus to the Miyetti Allah Cattle Breeders Association of Nigeria (MACBAN) that has President Buhari as one of its Life Patrons. MACBAN shares a commonality of interest with the Fulani irredentists who control the strings of power at the Aso Rock Villa, Abuja. Buhari’s presidency offers the best opportunity to leverage the Nigerian national state power to advance the Fulanization and Islamization of the entire country, by force if needs be.

MACBAN sought to test its muscles through the deployment of the Fulani herdsmen militia – an armed terrorist fighting force that is equipped and funded to do the bidding of the wild beef-cattle industry and the Fulani aristocracy that controls it. With the Buhari presidency having consolidated the country’s security apparatchiks under the control of the Fulani and Northern Muslims loyal to the Sokoto cAliphate, the MACBAN become so emboldened that, without any provocation whatsoever, it unleashed the Fulani herdsmen terrorist militia on Ukpabi Nimbo community in Uzo-Uwani LGA in Enugu state killing scores of residents, mostly farmers and destroyed property worth millions of naira.

It was later reported that intelligence reached the Enugu state governor, Ifeanyi Ugwuanyi, early enough to enable him to stop the planned attack by the Fulani terrorist herdsmen militia. It was also learned, however, that the frantic efforts by the Enugu state governor to obtain a preemptive intervention by the presidency or the Inspector-General of Nigeria Police were futile. The governor’s calls were never returned and the murderous attacks on an Enugu community went as planned on that fateful day in April 2016. Governor Ugwuanyi got scathing criticisms from many when he went to the Aso Rock Villa, in the aftermath of these deadly attacks, to publicly fraternize with President Muhammadu Buhari. Since the Uzo-Uwani massacres, similar audacious mass killings have occurred in Benue, Nasarawa, Taraba, Southern Kaduna, Delta, Kogi etc states. As incredulous as it may sound, no single suspect has been apprehended and arrested since these killings. 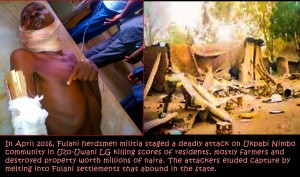 MACBAN-sponsored Fulani herdsmen militia in Uzo-Uwani LG, Enugu state, has brought Fulani settlements in Alaigbo as big security threats. It is now imperative that the indigenous residents must know more about the settlers in their midst.

The Buhari administration tried to formalize Fulani settlements in Middle Belt and Southern Nigeria through the implementation of the so-called Ruga Settlements as a Federal Government program. Ruga Settlements and other aspects of the Buhari regime’s Fulanization and Islamization agenda are firmly being resisted in the South and Middle Belt regions of Nigeria. It is widely believed that Fulani bush settlements are currently being utilized as staging camps for Fulani herdsmen terrorist campaigns. This security threat has persuaded the six governors of the Southwest to jointly create the Western Nigeria Security Network, WNSN (a. k. a. Amatekun), to checkmate the challenge posed by the Fulani herdsmen terrorist elements in the region.

While other parts of the South prepare to implement their own security outfits to counter the threat posed by the Fulani herdsmen militia, a readily available tool can be used, in the interim, to locate and map out all the Fulani settlements in the Southeast geopolitical zone, for a start. This YouTube video is used to demonstrate that the Google Earth application can be utilized to identify Fulani bush settlements without having to go to the suspected sites physically. Paid versions of this robust application provide better picture resolutions and other cartographic tools that can be used to improve accuracy. Information obtained from Google Earth images can be fed into the database that shall be used when the anticipated regional security network for the eastern half of Southern Nigeria becomes operational.