Complacency of Nigerians Responsible for Legitimization of the Fraud Called 1999 Constitution – Prof. Oyebode

The Igbo would say that when an abominable act is allowed to endure for decades, it is apt to be regarded as a norm. According to Professor Oyebode, a teacher of international law and jurisprudence, many experts in the field of constitutional law have remarked repeatedly that Nigeria’s 1999 Constitution is a fraud because it was written as a military dictat and put into effect through the issuance of Decree No 24 of 1999 by General Abdulsalami Abubakar. As far back as 2007, an activist group called the Movement for New Nigeria (MNN), which comprised constituents from the South and Middle Belt sections of the country, filed a suit in Lagos High Court asking that the 1999 Constitution should be declared a fraudulent document because it was not written and ratified by “We the people…” as claimed in its Preamble page. The court heard no defense to contravene the substance of that suit and thus affirmed the claims lodged by the plaintiff. The court, however, reneged on the definitive ruling that the fraudulent document should cease to be the legal framework for predicating the governance of Nigeria’s 4th Republic.

The Acquiescence of Nigeria’s Constituents Perpetuates the Fraudulent 1999 Constitution

Since 1966, Nigerian constituents had remained acquiescent to the takeover of political governance of the country by the military and the subsequent abrogation of the 1963 Republican Constitution which delineated the federal parliamentary democracy of later part of the 1st Republic. The impotent partisan political elite lacked the temerity to muster any popular resistance against the far-reaching and arbitrary decisions make and implemented throughout the era of military rule over Nigeria. After abolishing the 1963 Republican Constitution, the military strongmen proceeded to carve up the country’s geopolitical space into so-called states, starting from May 27, 1967 when 12 new states were created through the issuance of a military decree.

Many opinion leaders still blame this unilateral action by the ruling military junta in Lagos as the immediate precipitator of the Civil War (1967-70). When the federal side elected to divvy up former Eastern Nigeria into 3 states without consulting anyone on the matter, constituents of the aggrieved region decided to sever all links with the Lagos military junta by declaring the new sovereign Republic of Biafra three days later on May 30, 1967.

The stage was now set of unleashing the bloodiest genocidal war that the African continent had ever seen. The masters of global intrigue found the war-ravaged Nigeria and Biafra as favorable playgrounds to experiment with their neo-colonial policies that continue to define Africa’s fate till date. Before the guns went silent in January 1967, an estimated 3 million lives comprising mostly children, the old and infirm were prematurely truncated through mass starvation, disease and indiscriminate firepower from air, land and sea. The conclusion of the Civil War was seen by the military rulers as the green light given to them to deal with Nigeria’s geopolitical space as they saw fit. By 1996, the 1st Republic’s four-region governance structure was systematically transmogrified into the 36-state UNITARY government that exists today.

Before making their final exit in 1999, the military sought to leave their footprints in sands of Nigeria’s political evolutionary history by passing Decree No 24 which is now known as the 1999 Constitution with which the country’s 4th REpuublic has been governed till today. Here is the paradox about the Nigerian polity. The country’s emergent political elite corps, which has laid dormant for more than three decades, were willing to start the 4th Republic’s civilian democracy with a military decree euphemistically called the 1999 Constitution. That act of acquiescence by Nigerians set the stage for the emergence of complex difficulties which Nigeria’s constituents experience today in relating with the nation to which they are supposed to belong. 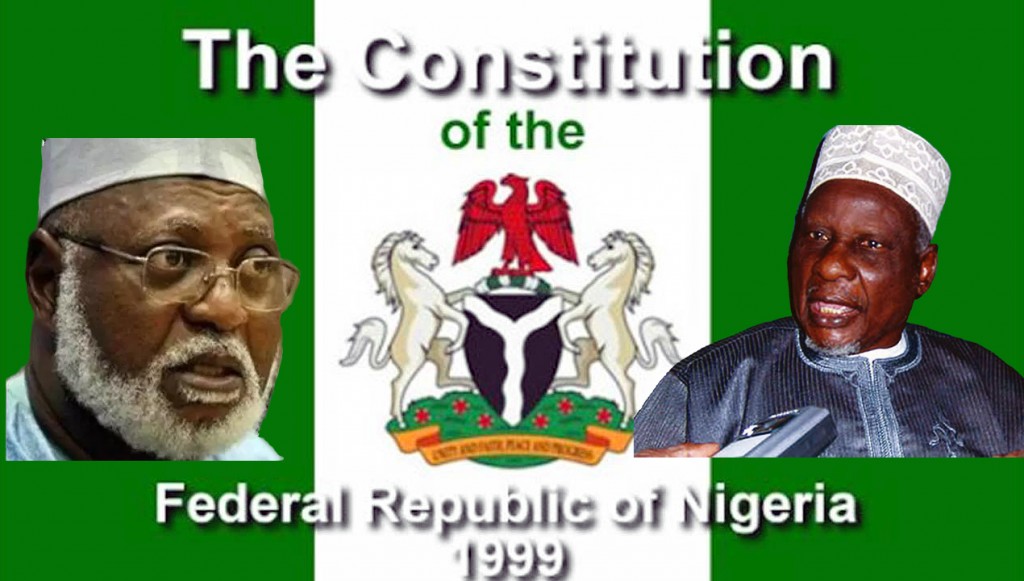 Tanko Yakasai, a frontline Fulani irredentist, is part of the elite corps who collaborated closely with Nigeria’s former military strongmen in writing and imposing the 1999 Constitution which General Abubakar decreed into force with Decree No 24 of 1999

Some half-baked efforts have been made during the Obasanjo and Jonathan’s presidency to revisit the many governance matters stalling the country’s economic development and threatening its internal security. Those powerful military politicians who had put the subsisting 1999 Constitution in place to serve a presaged ethnocentric agenda insist today that meaningful change can only the effectuated over their dead bodies.

So, the culture of acquiescence continues to dominate Nigeria’s geopolitical space despite the evident crises emanating from the attempt to govern a multicultural entity like Nigeria with a UNITARY Constitution which was specifically written to protect and advance the interests of the Fulani and the rest of Arewa constituents whose military strongmen had written the imposed constitutional framework for this democratic dispensation.

Periodical Elections as Sweeteners for Swallowing the Bitter Pill of Unitarism

The addictive sweeteners fed to the Nigerian polity to enable them to swallow and digest the military-imposed unitary constitution in place today are periodical elections which the handpicked Independent Nigerian Electoral Commission (INEC) orchestrates to deceive the outside world into believing that the “democracy” predicated on unitarism works seamlessly for all Nigerians. What a lie…… what a farce! Each time Nigerians flock to the polls, they are unwittingly attesting to the efficacy and wide acceptability of the imposed 1999 Constitution. But, is this really true? Of course, not.

The arbitrary transfiguration of Nigeria’s geopolitical space into mini-states has also irreversibly changed Nigerians’ attitude from competitive pursuit of regional development through well-planned and implemented schemes to enhance productivity into a rent-sharing political economy that is characterized by official corruption, opportunism, nepotism, lassitude and a marked reduction in productivity. Nigeria is almost entirely reliant on the export of crude petroleum and natural gas for payment of all the country’s foreign-exchange needs. Agricultural production, which used to be the key sustainer of the 1st Republic’s four-regional parliamentary democracy, is virtually nonexistent today. Nigeria has been incapacitated by the Dutch Disease since the oil-boom era of the early 1970’s. all the symptoms of this disease are wreaking havoc on hundreds of millions of Nigerians, as we speak and there is no relief in sight.

When is this acquiescence going to stop, how and who shall lead the way?