Constitution Making Is a Two-step Process: 1st Is to Agree to Form a Union & 2nd Is to Define Relationships, Functions – Iroanya

Why All the Focus on Nigeria’s Imposed Fraudulent 1999 Constitution?

This is the first of a two-part video series designed to summarize the rationale that has informed the decision of the Movement for New Nigeria (MNN) and its alliance partners in the Middle Belt and Southern Nigeria to declare a Constitutional Force Majeure in the coming weeks and months. Ethnic nationality leadership groups in Southern and Middle Belt regions of Nigeria had severally jointly repudiated and rejected the 1999 Constitution that they characterize as imposed and fraudulent. The multitude of lapses and deficiencies in this so-called constitution resulted from Nigeria’s past military autocrats’ abrogation of the regional federal parliamentary system, which the founding fathers agreed to at Independence of 1960 and systematically replaced it with a Unitary government that rules over the entire country from a single location in Abuja.

Dr. Iroanya starts by revisiting the definition and conventional meanings of the term “constitution”. He provided examples of how constitutional powers have historically been abused in the past half-century by the same military autocrats who authored and imposed the seriously disputed 1999 Constitution that props up today’s Unitary Nigeria. It is clearly evident that 1999 is both an imposition and a fraudulent document because its “Preamble” claims that it was agreed to and given to ourselves after solemn deliberations. That claim is a living lie that even the Nigerian courts are so embarrassed to adjudicate the matter in a longstanding lawsuit filed by leading protagonists of the MNN more than a decade ago.

The Dutch disease afflicted Nigeria during the crude-oil boom of the 1970s when the ruling military juntas of the era simply looked away from the agro-based economy of the 1st Republic and started to rely exclusively on the revenue from fossil fuel export to run the country. The envisioned national development was totally decoupled from the sources of production. Resources generated in one part of the country were arbitrarily diverted for providing priority development elsewhere. Rule through decrees enabled military dictators to radically transform the geopolitical map of Nigeria from the four semi-autonomous regions of 1966 into the 36 dependent administrative mini-states that exist today. Just before the final exit in 1999, the last military ruler, General Abdulsalami Abubakar, compiled all decrees and ordinances issued in the preceding decades into Decree N0 24 of 1999 that was handed over to the incoming civilian administration as the now disputed 1999 Constitution.

Most of the video is used to explain the two-step process involved in constitution making within a democracy. The first and most vital step is for the constituents of the country to agree to become part of a union. After that follows the articles of the constitution, which define the nature of the state, how constituents relate with each other, and then the laws for operating all aspects of the society. These two processes, upon completion, yield a constitution. The preambles of the constitutions of Ghana, South Africa, India, the United States and Ethiopia were presented as illustrations. All the constitutions referenced first proclaimed the willingness and agreement of constituents to form a union. Without this first step in place, no entity, be it nation or association, can proceed to give itself a “constitution”. Nigeria cannot be the exception to this rule. 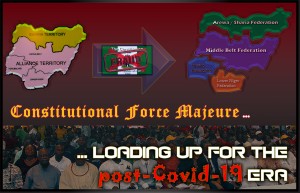 Today’s Unitary Nigeria, which is propped up by the widely repudiated imposed fraudulent 1999 Constitution has finally reached the point of implosion because the center can no longer hold. The impending cataclysm can be better managed by an orderly transitioning from the present into a future demanded by “we the people…” who own the geopolitical space called Nigeria.

The gross misstep in Nigeria in past 50 years, which culminated in the imposition of a fraudulent 1999 Constitution, is the primary motivator for the aggrieved constituents of South and Middle Belt, who make up Nigeria’s majority, to resolve on the invocation of a “Constitutional Force Majeure” (CFM). The Southern and Middle Belt Leaders Forum (SMLF), a platform that represents ethnic nationalities inhabiting these vast territories, had used open letters, press conferences and less dramatic conduits to alert the powers that be about the urgent need to rectify this gross unacceptable anomaly in nation building. But nobody was interested enough even to listen. Dr. Iroanya’s next video in the series shall fully elucidate further on what is brewing and the anticipated followup from the CFM.