Constitutional Force Majeure, with Its Five Demands, Is for the Benefit of “We the people…” – says Ndidi Uwechue

Constitutional Force Majeure Is the Ultimate Solution to the EndSARS, Revolution Now & Labor Agitations in Nigeria

It is hard to find any Nigerian who wants to be in Nigeria. The normal thing is for the elite’s children to be outside of Nigeria – getting educated, getting a job, getting medical care – in short, getting a good life elsewhere. The elite themselves are regularly abroad for medical trips, shopping, to visit their children there, and to enjoy the goodies and lifestyle there. We even hear reports of spouses of the ruling elite, more or less relocating abroad for the lifestyle and amenities they can so happily get there. Since the elite class wants to escape Nigeria, it is no surprise that the ordinary Nigerian of the middle class, working-class, poor, and extremely poor also want to abandon Nigeria. It seems everybody wants to EXIT the Nigeria that we have today. This is the Nigeria created through the imposed and illegitimate 1999 Constitution. 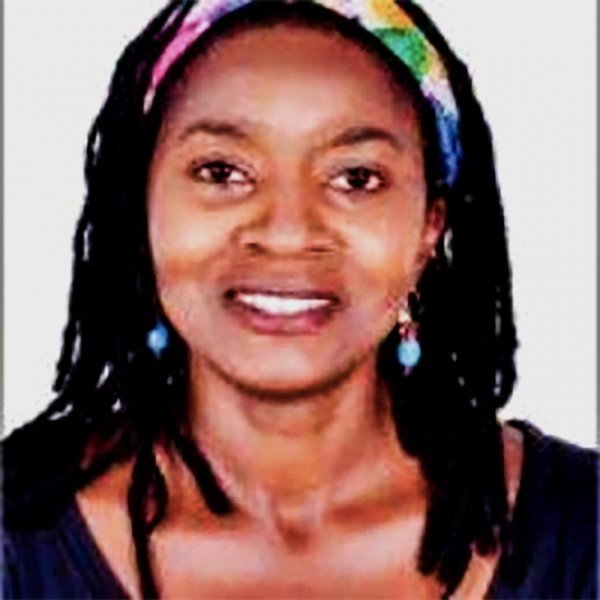 Ndidi Uwechue is a retired Metropolitan (London) Police Officer and a Pro-Social Advocate.

Misery abounds in that Nigeria. The various labor unions such as Nigeria Labour Congress, Trade Union Congress, Academic Staff Union of Universities, etc are either threatening to go or are on strike over working conditions and pay. All this negatively impacts the fabric of life and decreases the potentials and probability that children and young people will ever be able to have a good life in Nigeria.

The more public-spirited among young Nigerians organized themselves under the umbrellas of Revolution Now and EndSars (police brutality). Both Revolution Now and EndSars are nonviolent, “soft power” movements, yet very powerful in that they awakened consciousness in the land that cannot be extinguished but will grow and expand. History and the human spirit make that certain.

Quietly, and unknown, another movement had been going on in Nigeria that started a few weeks after the 1999 Constitution (Military Decree 24 under a new name) had been imposed upon the people. This movement was to become Movement for New Nigeria (MNN). Having realized that the illegitimate 1999 Constitution would bring only hardship, injustice and human rights abuses – as it has done, they set about to get that forged social contract discarded. This task, involving making alliances, and international imperatives, culminated in the historic Declaration on 16th December 2020 by MNN under the Nigerian Indigenous Nationalities Alliance for Self-Determination (NINAS), of a Constitutional Force Majeure over a Sovereignty Dispute occasioned by two issues with the Preamble of the 1999 Constitution:

1) When did the peoples submit themselves, their lands, and their assets into such a Union?

2) When did the peoples make for themselves the 1999 Constitution?

The central government was given Five Demands to be met within 90 days of the Declaration. Briefly, these Five Demands can be summarized as:

This Constitutional Force Majeure, through what it stands for and especially these Five Demands, focuses our attention on the sources of the human rights abuses, denial of civil liberties, and “curse” such that whilst being in Nigeria, no ordinary Nigerian can ever have a normal life, let alone a good life. The gross corruption and impunity, the lack of even basic amenities, and the reign of terror that Nigerians are experiencing, either through dangerously decayed structures, or through misuse of state power, or through the various types of terrorists in our space, are all dealt with by way of these Five Demands.

Clearly, this Constitutional Force Majeure, with its Five Demands, is for the benefit of “we the people”. It gives the peoples of Nigeria their sovereignty over their lives and future. It teaches Nigerians that “we the people” are the Owners, and that political office holders are the hired Managers, hired by way of elections. Owners are always the ones to tell Managers what to do. However, in Nigeria, the Managers were able to overpower the Owners through the imposed 1999 Constitution that is a forgery. This dysfunctional situation must come to an end. It has created a Nigeria that is the poverty capital of the world, that is a Country of Particular Concern, ie guilty of particularly severe violations of religious freedom, and that is being investigated by the International Criminal Court for Crimes Against Humanity and War Crimes – likely to change to GENOCIDE. 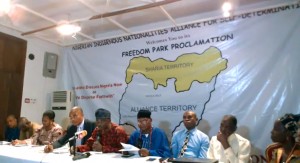 The NINAS Proclamation statement being read by the Yolicom Spokesman, George Akinola, at the Freedom Park venue on December 11, 2018.

So, the Demand for all political parties to close shop (even if temporarily), to allow for the unjust and undemocratic situation of them upholding this 1999 Constitution to be properly and fully corrected by orderly and honest dialogue and negotiations, is the right thing to do, and should be supported by all peoples of good faith.

In conclusion, the agitations, frustrations and anger of labor organizations, of ethnic nationalities self-determination groups, of Revolution Now, of EndSars, of “Our Mumu Don Do”, and that every right-thinking Nigeria feels and supports, are ALL addressed by the Constitutional Force Majeure with its Five Demands. It highlights to Nigerians the fact that “we the people” are the Owners, and politicians are the hired Managers who are there to serve and respond to the Owners.

In a free society, people have their right to self-determination, and they can speak out against and oppose the policies and actions of a government that is against them, without harassment and the threat of force or disenfranchisement. Therefore, Nigeria, as currently constituted, is not a free society. This Constitutional Force Majeure pinpoints that without a proper “we the people” Constitution, there can be no good life for Nigerians within Nigeria.

The ruling elite, who use every opportunity to ensure that they and their children are not in Nigeria but are abroad enjoying the freedoms in other countries that deny their own people, should be conscious of the messages Nigeria’s actions are sending to the watching international community.

NOTE: The full text of the Constitutional Force Majeure can be found at www.freedomfromnigeria.com

Ndidi Uwechue is a retired Metropolitan (London) Police Officer and a Pro-Social Advocate. Her personal mission is to use every means available “To produce a safer and more caring Nigeria”. She writes from Abuja or from Ogwashi-Uku, Delta State.