Creating Awareness Through Major News Outlets Is Essential in Pressuring US Govt. to Stop the Genocide in Nigeria – Says Frank Wolf

Genocide & Ethnic Cleansing of Middle Belt Christians: Whither the Stance of US Nigerian Diaspora Community on the Matter – Queries Ex-Congressman Frank Wolf of Virginia?

The venue was the main conference room of the Rayburn House Office Building at the Capitol Hill, Washington, DC where the International Religious Freedom Caucus organized a conference to review the escalating spate of genocide, repression and ethnic cleansing of Christians in many parts of the world. Presenters and guests came from the US, UK, France, Nigeria, Pakistan and Israel. This caucus, which is led by an incumbent US congressman, wishes to obtain updated accounts of the situation of things from the main hotspots in the Middle East, Africa, Asia and Europe. It is amazing to observe that the legislators in attendance are quite familiar with the goings-on and the fast-deteriorating situation of things in Nigeria where some of them have personally visited recently to see things for themselves.

During the one-on-one exchange between the Nigerian delegation led by the Lower Niger Congress (LNC) Secretary-General, Mr. Tony Nnadi and former US Congressman Frank Wolf of Virginia, the elder statesman sought to know why the stance of the Nigerian US Diaspora community is not made known to mainstream America. He specifically inquired why the Washington Post newspaper, for example, has not been made to carry feature articles on the genocide and ethnic cleansing of Nigerian Christians. His poser implies that getting the mainstream society to become familiar with the issue at stake shall help in forcing the hands of the US Government to do something sooner to stop the mass killings of Nigerian Christians by the rampaging Fulani Islamist terrorists and jihadists.

Frank Rudolph Wolf is the former legislator who represented Virginia’s 10th Congressional District in the United States House of Representatives from January 1981 to his retirement in January 2015. During his 34-year stint as a legislator, he severed as co-chair of the US Congress Tom Lantos Human Rights Commission, formerly the Human Rights Caucus. On May 9, 2014, Frank Wolf introduced the United States Commission on International Religious Freedom Reauthorization Act of 2014. In the 109th Congress, Mr. Wolf was chairman of Subcommittee on Foreign Operations, Export Financing, and Related Programs. While in office, he served as co-chairman of the Congressional Human Rights Caucus. Mr. Frank Wolf is a member of the Moderate Republican Main Street Partnership.

This seasoned politician was part of the audience that gathered at the Rayburn House Office Building at the Capitol Hill to hear presentations on the escalating spate of violence against Christians in many hotspots of the world. International Religious Freedom Caucus organized and coordinated the well-attended event. Congressman Gus M. Bilirakis (Republican) representing Florida’s 12th Congressional District is the current chairman of the International Religious Freedom Caucus. In attendance also was Congressman Dan Lipinski (Democrat) representing Illinois’ Third Congressional District. Mr. Lipinski is reputed for being a champion of human rights and the dignity of the human person. 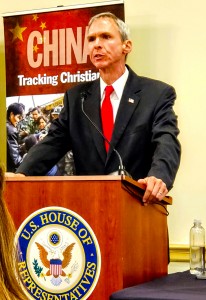 Congressman Dan Lipinski (Democrat, Illinois), who spoke at the conference, is widely known in the US Congress as “a champion of human rights and the dignity of the human person”.

Congressman Bilirakis kicked off the event by acknowledging the increase in the incidence of violent and repressive actions against Christians in nation-states where they are in minority. He also noted the resurgence of anti-Semitism which may have provided the impetus for the rising number of attacks on synagogues and Jews in Europe and America. Religious intolerance was obviously the key motivation for the recent deadly assault in New Zealand mosques by an Australian extreme right-winger. Freedom of religious affiliation and worship is fundamental to the US Human Rights charter which Americans would like to see emulated in other multiracial and multicultural societies around the world. Panelists at this International Religious Freedom Caucus event featured presentations reflecting the circumstances and the current situation of things in the United Kingdom, France, Pakistan, Israel and of course, Nigeria. Kevin Clark, a senior editor and Chief Correspondent for America Media, shared some photo images of absolute ruination he had recorded during a just-concluded trip to Mosul, Northern Iraq which was overrun and occupied by the ISIS jihadists until recently.

What came across clearly during these presentations is the fact that, if nothing is done soon to stem the tide of genocide against Christian minorities in the Middle East, South Asia, Far East and Africa, millions of Christians are destined to be murdered or expelled from places where they had lived and thrived for millennia. The population of Christians in Iraq was said to be 1.3 million before Saddam Hussein’s removal from office. Today, Iraqi Christians number about 100,000 only, for example. One of Christ’s Apostles, Saint Thomas, was buried in Mosul, Iraq. An ancient church built to mark Saint Thomas’ tomb is one of the casualties of the fight to chase ISIS fighters out of the northern Iraqi city. The remaining Iraqi Christians don’t feel as safe today as they felt under the Saddam Hussein regime. The fear of probable death at hands of the various Islamist factions that now control Northern Iraq has compelled many Christians to flee the country with no intent to return. In Pakistan and the Indian subcontinent, religious intolerance has put non-Muslims at risk of genocide in Pakistan while Muslims encounter severe repression in Myanmar and majority Hindi-speaking Indian nationals.

Mr. Tony Nnadi, the Secretary-General of the Lower Niger Congress (LNC) came from Lagos, Nigeria to partake in this important event. The thrust of his argument is that there appears to be benign neglect of the ongoing ethnic cleansing and genocide in Nigeria’s Middle Belt region being perpetrated by the Islamist Boko Haram and the Fulani herdsmen militia terrorist outfits. The ongoing genocide and ethnic cleansing of Middle Belt Christians have, over the years, been deceitfully but erroneously portrayed as localized random violent clashes between nomadic pastoralists and farmers who cohabit the area. Some go further to justify the increased incidence of mass killings by the widespread poverty and southward advancement of the Sahara Desert which had put additional pressure on the pastoralists population of the semi-arid parts of the Arewa North. Based on these misconceptions, which are being aggressively marketed by the incumbent Buhari presidency to the international community, including the US government, majority of global institutions and governmental bodies tend to believe that alleviation of poverty through foreign aid and needed domestic policy changes are all that are required to arrest the mass killings of the indigenous inhabitants of the Middle Belt Region who are majority Christians.

Mr. Nnadi reminded the caucus that well-known former leaders of Nigeria, such as President Olusegun Obasanjo and General Theophilus Danjuma (both Christians), have used appropriate public settings to declare that the killings in the Middle Belt are the handiwork of well-organized Islamist terror groups who are actively colluding with the Buhari administration and the national security apparatchiks under its control. President Obasanjo recently used the platform of an annual Diocesan Synod meeting to declare that the ethnic cleansing and genocide of Middle Belt’s Christian majority are indicative of President Muhammadu Buhari’s premeditated “Fulanization” and Islamization of Unitary Nigeria. The LNC scribe warned of the unthinkable dangers posed by a successful armed takeover of Nigeria’s geopolitical space by the likes of Boko Haram and the Fulani herdsmen militia which have been rated to be the first and third most deadly terrorist groups in the entire world. He alerted the audience that the ISIS, having been militarily dislodged from the Levant, now has its sight trained on the West African subregion, with Nigeria as the prime target. Letting Africa’s most populous country with the largest oil and gas deposits in the African continent to fall into the hands of ISIS-affiliated murderous Islamist terror groups constitutes an affront to the US strategic interest in the Eastern Atlantic from where a significant percentage of America’s population, including a former US President, derive their ancestral identity.

A section of the capacity audience participating in the International Religious Freedom Caucus conference in the Rayburn House Office Building at the US Capitol, Washington, DC

It was during the exchanges associated with expert presentations at the caucus event that the veteran US Congressman, Frank Wolf, wished to get the clarification of what exactly can be done through the auspices of the US Government to address the genocide on Nigeria’s Middle-Belt Christians. It was agreed that the immediate appointment of a US Special Envoy to Nigeria by the President Trump’s administration is the most important first step in getting the situation under control before the country implodes in a violent melee. The elder statesman wondered why the mass killings and other heinous crimes perpetrated on Christians in Nigeria’s Middle Belt are not being given required media exposure, especially by the powerful national and regional newspapers in the United States. From his perspective, proactive engagement of civil society here in America is the reliable means for getting the US Government to respond to demands like the appointment of a US Special Envoy to Nigeria. He is also of the view that public visibility of the US Nigerian Diaspora community regarding this matter, in particular, and other associated issues, in general, shall contribute immensely in getting the politicians in Washington to begin to consider the fate of endangered Nigerian Christians as a priority item on their to-do list.

To view the rest of the photos recorded  at the International Religious Freedom Caucus event held at the US Capitol on June 5, 2019, click on https://photos.app.goo.gl/rNvPd2T8MEZ7zDUw8