African traditional religionists in the archeological town of Igboukwu in Aguata Local Government Area of Anambra state are reportedly spoiling for a showdown with the Catholic Church over the recent malicious premeditated destruction of 15 ancient shrines and traditional religious and cultural artifacts in the community.

Specifically, they accused Rev. Father Emmanuel Obimma (Ebube Muonso), the spiritual director of the Holy Ghost Adoration Ministry, Uke, of orchestrating the destruction of holy traditional religious sites in the ancient community during his December 29, 2017 crusade at the Central Primary School field, Igboukwu.

The President General of the Otu Odinaana Youths Association of Nigeria (OOYAN), Priest Okwudili Ezeife, told OrientDaily exclusively that Fr. Obimma ordered some youths who attended the crusade to vandalize the shrines in Igboukwu, against the forewarning by African traditional religionists.

According to him, during the mayhem, as much as 15 shrines, masquerade paraphernalia and many other ancient cultural artifacts as well as mystical wands (ofo) valued at over N10 billion were destroyed or carted away by a team of fanatical religious zealots.

He further disclosed that traditionalists in the community had earlier received some intelligence reports that the firebrand priest, Ebube Muonso, was coming to Igboukwu with intention of cleansing the land of idols and decided to write a petition letter to the parish priest of the host church, Our Lady of Fatima, urging the crusaders to steer clear of the community’s religious sites.

“We heard that he went to Ikenga and destroyed shrines; went to Ekwulobia and did the same and that we do not want him to destroy anything that belongs to the African Traditionalists in Igboukwu”, he disclosed stressing that the Catholic Church ought to have respect for the freedom of worship as enshrined in the Nigerian constitution. 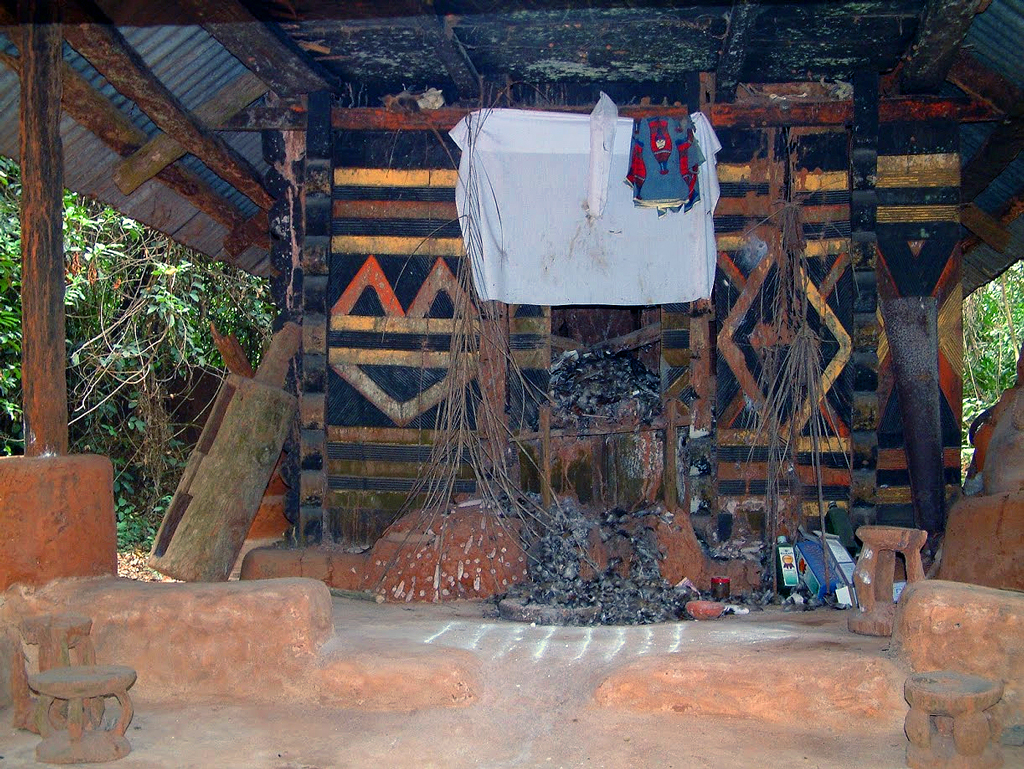 Colorful paintings adorn the walls and other trimmings in shrines patronized by Igbo traditionalists. Sacrificial offerings of chicken and other animals may have plumage and other remnants at the shrine’s altar. Security around shrines is usually lax until emergence of fanatical Christian iconoclasts commenced their rampages.

Ezeife told this reporter that the parish priest received the letter with joy and made a copy available for the Catholic Charismatic Renewal of Nigeria (CCRN), the group that allegedly invited Ebube Muonso for the crusade.

According to him, “the Charismatic group had resolved to destroy all the deities in Igboukwu”; they went ahead to unleash the mayhem at the climax of the crusade.  “I overheard when the reverend father gave order for the youths to go to all the shrines and plunder them commanding them to wipe out the family of anyone that stand in their way. I quickly went to my shrine to stop them from destroying it but when I saw there were more than 500 weapon-wielding youths with flood lights, I quickly went and hid closeby to watch helplessly as the plunder ensued.”

He said that he then got in touch with the chairman of his village, Ihuakaba, who took him along in his car as they went out to see the group chanting feverishly as they made their way back to the Central School field where the crusade was holding, carrying their spoil along.

“There were 15 deities in all whose shrines were desecrated and plundered by this group,” he said. In his words, “Ogwugwu onye kere onwe ya, which I am the high priest of was destroyed, alongside Udo Nkwo, the deity that hosts our Nkwo market. The charismatic group committed an abomination there. They set ablaze an ancient mammoth-sized wooden gong (ukolo) in the shrine. They went to the Ogwugwu Shrine in Nkwo Igboukwu and destroyed everything there. The worst was that they went into these shrines with unclean women (women seeing their menstrual period) thereby desecrating the place. Udo Akukwa was also plundered, alongside Eze-Nweke, Udo Akwari, where they made away with the electric power generator and other valuables, Udo Oti was not spared, alongside Ulasi Ezeigbo.

They went to the Obi of the elders and plundered the shrine of Mmuo Ubi and made away with the ofo (mystic wand). Ogwugwu osoro-okwu n’uka was also plundered, they also went to the Oda that unites the villages and destroyed it. In fact, no deity in Igboukwu was spared.”

According to the Chief Priest, the group also accosted Barrister Tochukwu Ezeokoli, an indigene, who was driving back home that night and shattered the windshield of his new Mercedes E-class, because he refused to help them carry some of the things they brought from the shrines in his car to the primary school field.

He said that they had alerted the Divisional Police Officer at Ekwulobia of the development and are expecting rule of law to take its course. We have, however, summoned a native doctor to consult the gods and the gods have declared what happened as an abomination and that if restitution is not promptly done, heavy consequences await the assailants.

In his words, “it is because we practicing traditionalists and do not spill blood that we did not react the way we felt at the huge damage the Catholic community has unleashed on our own. That the reason people are bent on using the church as cover to destroy traditional religion was so that they would have lease to start committing other abominations in the land without fear of repercussion.”

Confirming the incident, Nze Charles Chukwunonso Umeokonkwo, (Ezeononaobi Igbo), speaking to OrientDaily in Igbo palace, Igboukwu, reiterated the abominable nature of the act. He said that the parish priest and Director of Culture and Tourism came to his palace to inform him of the incident.

“We consulted the three Chiefs in Igboukwu, as well as Dr. Chukwuemeka Ezeife (Okwadike Igboukwu). When we got wind that the Omenala youths were planning arson in the place, I summoned the deities’ Chief Priest to come, which they obliged. With them, we begged the youths to desist from reprisal attack and listen to the voice of negotiation.”

The large wooden drum (Ikolo) functions like the bell of the typical Christian church. These artistic objects often define the shrines to which they belong. Vandalism and escalating artwork theft compel shrine custodians to place the ikolo behind barricade as shown in this picture.

Nze Okonkwo, who is also a respected Catholic in the community, condemned the act, saying that it was against subsection 48 of 1999 Constitution of Nigeria which gives freedom of worship to all its citizens.

He said it was because traditionalists were not bloodthirsty persons that stopped them from retaliating and destroying lives and property.  “They had organized six 50-litre jerrycans of petrol to burn down Our Lady of Fatima, St Michael’s, St Martin’s, St Patrick’s, St John’s, St Flannan’s Catholic Churches, all located in Igboukwu.

When the news team visited the Udo Nkwo shrine, there were men of various age groups in somber mood, carrying out some rituals which OrientDaily gathered were cleansing rituals conducted to appease the gods in the shrine, so they can continue to answer their prayers. He said that all the traditionalists were mourning over the “irreplaceable losses”. He, however, said that the Udo deity has been consulted and it said that to appease him, those who desecrated his sacred places should build him a multi-storey building.

The Head Ozo Amuma (a prophetic titleship), Okeke Ezeokoli, said that the Catholic community has destroyed the sacred place that had been the salvation of Igboukwu people and its natural ecosystems.

“What was done to the deities of Igboukwu is not fair and if strange things start happening to those who were involved in this despicable act, one should not wonder what is wrong, but should come to seek the face of Igboukwu deities who have been wronged”, he cried. He then went into a session of raining curses on whoever took part in the destruction exercise.

The Chief Priest of Udo Shrine bemoaned the demolition of his deity’s shrine, saying that the culprits also made away with huge amounts of money and burnt ancient masquerade regalia and other priceless paraphernalia the shrine housed.

Tochukwu Nwankwo, a native doctor who was present at the shrine and an Udo devotee, also expressed his disapproval at the incident and spoke in strong terms against the act. He expressed astonishment that Fr. Obimma came to Igboukwu with weapon-brandishing security men alleging that it was evidence he had premeditated the shrine demolition exercise. “Ebube Muonso came with criminal intent and should be brought to book. Fr. Ede has come for prayer crusade in Igboukwu several times and no traditional sacred place was touched.  Fr. Mbaka has also come to Igboukwu for prayers and we were not disturbed, alongside Rev. Awusie of the Anglican Communion, and we were not disturbed,” he complained.

On his part, Rev. Fr. Christopher Azolibe, the parish priest of Our Lady of Fatima Catholic Church, Igboukwu, while confirming the incident said that it was not plan of Igboukwu Catholic community to destroy the shrines of traditionalists in the town and that the act was merely a coincidence with the originally scheduled crusade which was organized by the charismatic group of the parish with the approval of his office.

Condemning the act, Rev. Fr. Azolibe, however, exonerated the Catholic community from the act saying that given “the incident happened at night, riff-raffs could have taken advantage of the night crusade to do anything they want and then the church will bear the brunt.

He said that on hearing of the incident, he went to various authorities in the town to inform them his stand over the issue and to exonerate the mainstream Catholic community from the act. He said that though he was not at the crusade ground, he knew that Ebube Muonso came for spirituality activity in Igboukwu and that his activities were approved by the Archbishop of Onitsha Archdiocese just as is the norm of the church.

The parish priest also denied receiving any letter from the traditional community before the crusade, but admitted that he only received the one they wrote him on the 31st of December, which he replied thus, “I told them we sympathize with them over what had happened as the church. I reminded them there has been cohabitation between them and us over the years. However, I have been here for four years and have never destroyed any temple or instructed anybody to do such. Even one of my outstations has a shrine in front of it but I do not disturb it. I just come to celebrate mass and go.” 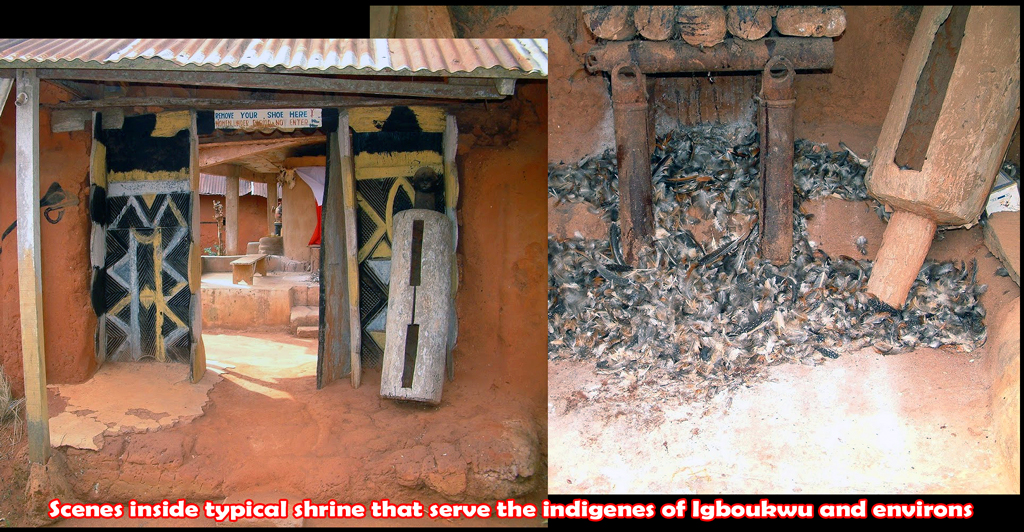 Before British colonization, the Igbo interacted closely with deities whose shrines were conveniently sited in vicinity of markets and public squares. Villages had their own deities and shrines. There has been mass abandonment of local shrines due to mass conversion into Christian faith, but they were never desecrated and defiled as reported in this article.

He said that he was not aware if Ebube Muonso gave express order for people to destroy the shrines of the traditional religionists and Igboukwu community’s ancient cultural artifacts. He also denied that the Catholic community accepted to pay for the damages. “It is not true at all. How can we pay for something we have not done? We have told them that if they have caught any of the assailants, they should hold them accountable.”

OrientDaily gathered that the coalition of the two groups; Catholic community and traditional priests have scheduled to meet again on February 1, 2018, when it is expected that the issue will be resolved. However, as at the time of filing of this report, the accused, Rev. Father Obimma, is unable to give a reply to the accusations against him. However, OrientDaily promises to publish Father Obimma’s angle next week.