The month of February is designated as the “Black History Month” in the Unites States of America. During this period, special focus is given to the important historical contributions which Americans with Black African background have made in evolutionary history of the world’s economic and military superpower. It is well-known fact that the free labor exacted from African slaves imported into North America played the limiting role in laying the early foundations of the US capitalist economy. But due to the slave culture which had pervaded every aspect of American life, particularly in the era that preceded the civil-rights movement of later part of the 20th Century, the official historical narrative learnt by mainstream America in schools barely made significant mention of African Americans and their contributions in making the US what it has become today.

The racism and culture of slavery that had defined the United States were also prevalent elsewhere in the Americas, including the the Caribbean Basin. This YouTube video reports on a journey of discovery in contrast along the land border that separates the two nations of Haiti, on the western part and the Dominican Republic, on the eastern part, of the Hispaniola Island in the Caribbean Sea. The contrast between the territories occupied by Haiti and the Dominican Republic is so glaring that the difference can be seen easily from space. While the Dominican Republic looks green due to the lush vegetation cover, Haiti has a brownish hue due to lack of vegetation cover and the associated severely eroded terrain in the countryside.

Closer to home down here on earth, a child born to a typical Haitian woman has two-and-half greater chance of dying before the age of five years than a child born to a woman in the Dominican Republic. Per capita income of the average Haitian is only 10% of the Dominican Republic counterpart. The sum total of this disparity is that life is brutish and short for the struggling Haitian while his counterpart across the border in Dominican Republic can live a reasonable lifestyle into old age. Politically, the Dominican Republic enjoys stability which is regarded as a rare commodity in Haiti. These sharp contrasts are compelling enough to persuade this freelance journalist to explore along the land border separating these two neighboring countries that might as well be a whole continent apart from each other.

The difference between the fortunes of these two neighboring nations is grounded in their respective colonial history, domestic economic choices and of course, racism. The French colonized Haiti while Spain colonized the Dominican Republic. Imperial France saw the colony of Haiti as a cash cow to be milked till it dropped dead while imperial Spain had a long-term plan on how to utilize the assets offered by its colony to the east. The French relied heavily on African slave labor to energize their exploitative agenda in Haiti. With cheap slave manpower, the vegetation cover shielding Haiti’s topsoil was stripped to make way for massive sugar cane plantations to supply the lucrative markets for sugar and rum which fetched top bucks in cosmopolitan Europe.

The manifest greed of the French soon engendered slave discontent and eventual revolts of the late 18th Century. In 1804, rebellious slaves in Haiti successfully defeated the French colonial army and declared their independence. The Spaniards in Dominican Republic chose to intermarry with the indigenous peoples and regarded the colony as their permanent home. 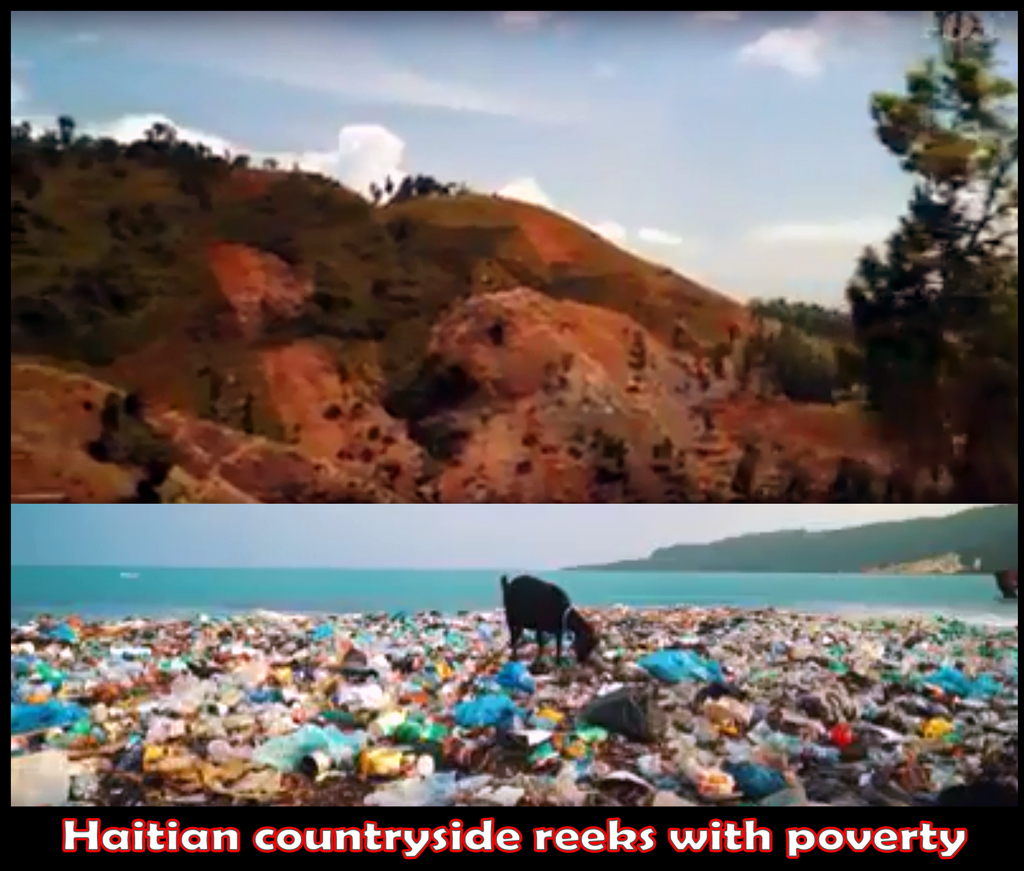 Racist United States of America and other slave-trading countries of Europe saw the Haitian revolt and declaration of Black self-rule as an affront which must never be tolerated or condoned. France easily obtained whatever support it required to checkmate and hamstring the inhabitants of its former colony while the US utilized its naval forces to repeatedly intimidate, invade and occupy the newly freed Black nation under whatever pretext that could be contrived. Economic blockade against the newly independent Haiti was near total, thereby compelling Haitians to turn inward to put even more intense pressure on their already exhausted topsoil to feed its own population without any assistance from the outside. The stripped vegetation cover never got any chance to recover and the same scenario persists till date.

Haiti’s misfortunes are galore and everyone, including its immediate neighbor, are willing and ready to take advantage of this embattled nation in whatever way they can. Internal political dynamics within Haiti also contributed immensely in stagnation of the country’s socioeconomic advancement which has earned the world’s first self-ruled Black nation state the disdain of being the poorest in the Western Hemisphere. For obvious reasons, the land border between Haiti and Dominican Republic is possibly one of the most guarded frontiers in the world. While the Haitian population is mostly Black African, that of Dominican Republic is hybrid European with a resultant lighter skin pigmentation.

Politicians of Dominican Republic have embraced the allure of keeping out persons of darker skin pigmentation out of their country. This political decision has resulted in legislating laws on immigration which retroactively requires Haitians born in Dominican Republic to face deportation. The 2010 immigration law has gone a long way to equip and buttress the racist agenda of some of its citizens who wish to see a much whiter-skinned Dominican Republic, going forward.

This YouTube video provides food for thought for the sub-Saharan African, especially during this Black History month in the USA. Enjoy the video and make sure that you share same as widely as possible. A change is possible. But the pervasive ignorance about what goes on along the Haiti-Dominican Republic land border must first be addressed by letting as many as humanly possible get to watch this gut-wrenching video.