Below is a memorandum sent to the US EXIM Bank boss after deliberations by members of a Subcommittee of SAAC.

To: Kimberly Reed, President & Chairman of the Export-Import (EXIM) Bank of the United States

From: Sub-Saharan Africa Advisory Subcommittee on How the Export-Import Bank of the United States (EXIM) and other United States Government agencies work more closely together to achieve the vision of President Trump’s Prosper Africa initiative.

Established by Congress, the Sub-Saharan Africa Advisory Committee (SAAC) provides guidance and advice regarding EXIM policies and programs designed to support the expansion of financing support for U.S. manufactured goods and services in sub-Saharan Africa. EXIM has a congressional mandate to focus on projects in this region.

Committee members advise the Bank on the development and implementation of policies and programs designed to support EXIM’s engagement in sub-Saharan Africa with a view to boosting American exports and bolstering U.S. jobs.

On October 29, 2019, the SAAC convened a subcommittee to consider the question: How can EXIM and other U.S. Government (USG) agencies work more closely together to achieve the vision of Prosper Africa? The subcommittee of the SAAC is chaired by Gary Blumenthal and the SAAC members are Dan Runde, Ejike Okpa, James O’Brien, and Florie Liser. Also, in attendance were relevant government and private sector stakeholders.

The Prosper Africa initiative, launched by President Trump, seeks to substantially increase two-way trade and investment between the United States and Africa. In one of her first official acts of duty, EXIM Chairman Kimberly Reed led the U.S. Presidential Delegation to the inauguration of His Excellency Cyril Ramaphosa, President of the Republic of South Africa, where she commented that “President Trump launched the “Prosper Africa” initiative to advance mutual prosperity in Africa and the United States.” 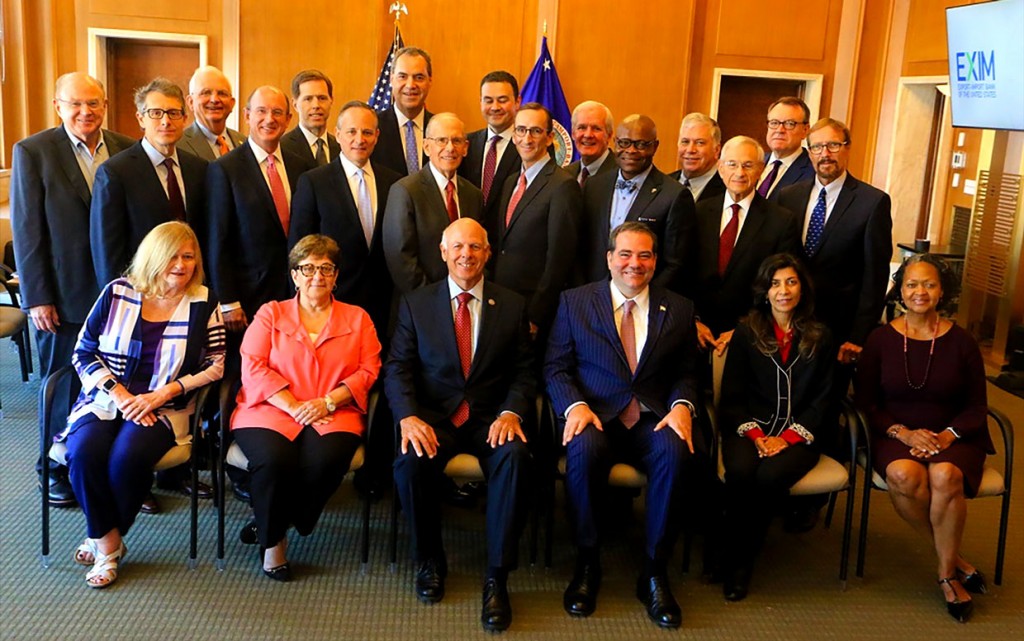 Members of Sub-Saharan Africa Advisory Committee (SAAC) pose after a recent meeting at the headquarters of US Exim Bank in Washington, DC. Standing fifth from right is Mr. Ejike Okpa II of Dallas, Texas, an appointee of the Trump administration

The continent of Africa represents a dynamic, $3 trillion global business opportunity for the United States of America; and rightfully so, the Trump Administration has chosen to support growth in this key market through the Prosper Africa initiative; furthering the strategic investment of the three preceding administrations.

This focused effort is welcomed by the heads of African governments and the African private sector because U.S. companies have a reputation for providing quality and reliable goods, transferring knowledge and capacity to local firms and respecting labor and human rights. The Prosper Africa initiative seeks to substantially increase two-way trade and investment between the United States and Africa. To make this initiative a success, U.S. government agencies must work together through a “whole-of-government” approach, of which the Export-Import Bank of the United States is a vital participant.

However, EXIM has been underutilized in recent years – due to a lack of board quorum – and it is in the interest of the United States that EXIM be reauthorized. Prior to May 2019, the United States was the only G-20 country without a fully functioning export credit agency (ECA).

The last year in which EXIM was fully authorized and had a board quorum was in 2014. In that year alone, EXIM’s supported 164,000 American jobs and export transactions valued at $26 billion.

During the time EXIM was shuttered, China became increasingly aggressive and it is in the strategic interest of the United States to counter China’s business efforts around the world.

China has supplanted the United States as the top trading partner in 124 countries globally. In 2018, China provided an estimate of $39.1 billion of medium and long-term financing.

That same year, the U.S. only provided $0.3 billion in the same kind of financing.

These realities demonstrate that without EXIM, U.S. businesses cannot compete on an equal footing abroad, including in Africa where China is particularly assertive.

EXIM’s SAAC was established by Congress to provide guidance and advice to EXIM regarding its policies and programs in sub-Saharan Africa. Should Congress fail to reauthorize EXIM, this committee would cease to exist.

The subcommittee is providing several concrete and actionable recommendations that EXIM can consider undertaking to increase interagency coordination in this area:

The sub-committee recommends the agencies work together to create a document or chart that provides clear guidance on what each agency is responsible for during the deal process along with a contact person for each agency that works directly with the business with clear guidance for risk management and project guidelines. A key aspect of EXIM’s success will be to clarify its deal-making process, both internally and in cooperation with other agencies. We also recommend that EXIM’s website ensure its tools and deals are clearly available online.

The sub-committee recommends EXIM take specific measures to market its tools to industries where the U.S. has comparative advantage such as financial services, technology, agriculture and agro-processing, medical equipment, and construction, while continuing to be ready to support bankable deals in all sectors and be demand-driven.

The sub-committee recommends specialized positions be added to EXIM to bolster their deal teams. Additionally, EXIM should consider a staff secondment program between EXIM and other USG the agencies would also allow key officers to gain a deeper understanding of each agency, helping them to better-serve U.S. businesses.

The sub-committee recommends EXIM should create offices in key regions of Africa or have officers embedded in U.S. embassies abroad and that Congress should appropriate and that the Office of Management and Budget (OMB) should allocate the necessary funds to do so. At the very least, U.S. Commercial Service Officers from the Department of Commerce should be EXIM Ambassadors and promote EXIM as a key tool in the trade toolkit. Additionally, EXIM should increase its participation in conferences, exchange programs, and trade shows to connect U.S. business to Africa and consider hosting a reoccurring D.C.-based conference with the U.S. president and African leaders that would take place every second year of the U.S. presidency. This would demonstrate the U.S. commitment to African progress and boost the credibility of U.S. involvement.

This is not your grandparents’ Africa; it is richer, freer, and has a lot more opportunities than 20 years ago. Africa is an enormous business opportunity for the United States of America. The continent is going to double in population over the next 30 years and has a middle class of 350 million people. That middle class is going to grow as the continent is urbanizing. China has supplanted the United States as the top trading partner for 124 countries globally. Prosper Africa is a good step, building on many decades of bi-partisan effort in the United States. Yet, Prosper Africa will fail without a fully functional EXIM Bank.