Erosion Control and Road Maintenance Are Two Sides of the Same Coin; They Make Each Other Whole

The Solution to Erosion Menace in Alaigbo – WIEF

Erosion is imperative in nature. The earth’s surface has constantly been reshaped by the forces of erosion since its creation. Each generation of humans had to learn to live with forces of erosion by adapting land-use practices that minimize the negative consequences of uncontrolled erosion. Alaigbo belongs in the equatorial rain forest region, which is blessed with about 80 inches of rainfall annually. The soil formation in most of Alaigbo is of the loose sandy and lateritic type, which can easily be eroded and washed away by floodwater. Up till the late colonial era, the Igbo landscape was covered with lush vegetation that matched the generous annual precipitation that the area receives. There were hardly more than a handful of significant gully erosion sites in the entire former Eastern Region. We now have a minimum of 2,500 gully erosion sites in the Southeast geopolitical zone which makes up about 60% of the land space of the former Eastern Region. Anambra state, which is one of five states of the Southeast zone, has 700 well-developed gullies and many new ones must have appeared since the last census was taken.

To be able to find practical solutions to the erosion menace that has visited Alaigbo in post-colonial Nigeria, one must understudy the reasons for accelerated growth in the number of gully erosion sites in the past four decades or so. Experts on erosion have identified key anthropogenic factors that explain the recent upsurge in the development of new gully erosion sites throughout Alaigbo. Of these factors, the generation of increased floodwater runoff from homesteads and farmlands, indiscriminate felling of trees and haphazard construction of roadways are mostly responsible for the formation of new gullies. Vegetation cover has been removed in large amounts these days to clear the way for the construction of new homes and provision of more farmland to feed an ever-increasing population. Farmlands, which show reduced fertility after intense cultivation, are often abandoned for virgin land elsewhere. Abandoned unproductive farmlands lack adequate vegetation cover due to the absence of active reforestation and soon can support only the growth of savannah-like grassland within a rainforest climatic belt. Metal roofing sheets and concrete pavements are commonplace in many Igbo homesteads of this era. Floodwater discharge from such homesteads contributes to the formation of flood torrents that excavate huge gullies downstream.

Based on the above, it is easy to see those three fundamental principles, when applied massively and meticulously at the grassroots level, shall bring erosion menace throughout Alaigbo under control within a few short years. Maintenance of zero runoff from homesteads and farmlands, preservation of traditional flood channels during design and construction of roads and widespread forestation of unused open lands shall eliminate the erosion menace that is presently devastating our ancestral lands.

In a typical Igbo traditional homestead before the onset of Westernization, roofs were thatched with dry grass or tiles made from raffia palm leaves. Homesteads were not as expansive as they are these days. Still, all floodwater generated from building roofs and exposed spaces were channeled into mud wells (umi) or open catchment pits (ogwugwu) within the premises or just outside the compound walls. Most homesteads were associated with contiguous portions of farmland which were perennially cultivated with crop rotation method. Tree hedge, earthen mounds and low mud walls were used to enclose the home farmsteads to ensure that neighbors’ livestock don’t gain easy access and damage one’s crops. These partitions also ensure that floodwater generated within one property does not spill over into adjacent ones. Crops were planted in mounds that were connected with mini ridges to help confine rainwater to small puddles from where it soaks into the soil.

In rare situations, floodwater might escape from compounds along walkways and paths. The scanty discharge from these sources was channeled into designated flood paths (ogboli) which usually ended in wooded meadows at the periphery of town where the floodwater collected and eventually soaked into the soil. Based on traditional cultivation methods and homestead design, our ancestors implemented the zero-runoff principle with methodologies that were appropriate for their own circumstances. Such a feat can be replicated today with modifications adapted to address present changes in lifestyle and domiciliary patterns. 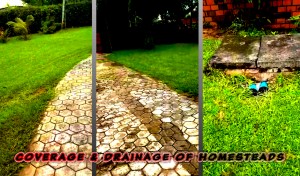 Residential premises should be covered with grass, not paved over entirely with impermeable concrete. Stormwater runoff is collected and channeled into a secured non-compacted mud well.

Stripping vegetative cover that protects the fragile soil of Alaigbo has played a significant role in the development of gully erosion in the area. Tree leaves and branches help to break the velocity of falling raindrops, thereby reducing the energy with which rainwater impacts the topsoil. The root system, which permeates the topsoil, helps to bind it together, thereby making it difficult for stormwater to wash and carry away debris components that make up the soil. The network of tree root systems increases the permeability of the topsoil, thereby making it easier for rainwater to soak into the soil soon after hitting the ground. Big trees provide cover and protection for other vegetative undergrowth, which combines to increase the sponginess of the topsoil.

An increase in population has resulted in the massive clearing of trees, including clear-cutting of tree groves, woodlands, and forests, to make way for new homesteads, farmlands, road networks and for installation of societal amenities like electric power poles and water pipelines. Even though Nigeria is awash with abundant natural gas reserves that are flared continuously to facilitate petroleum extraction, an overwhelming percentage of citizens still rely on firewood as the primary source of cooking fuel. Forests and woodlands are steadily being depleted throughout Nigeria just for wood production. Most heavily populated parts of Alaigbo are now almost devoid of tree cover that was commonplace only a few decades earlier.

As much as everyone understands the reasons for felling trees and clearing woodlands to meet compelling human needs, no one should lose sight of the inherent danger in stripping our fragile soil of its protective vegetative cover without making a commensurate effort to plant a new one. Vegetative cover, be they trees, shrubs, or grass, must be replaced no sooner than the existing one is stripped for development purposes. There is no justification for the average Nigerian to still rely on wood fuel when the country has one of the largest natural gas reserves in the world as we speak. There ought to be a national policy to shift away from reliance on wood fuel to petroleum products, particularly natural gas, which we have in abundance lying beneath our soil.

Perhaps, the most significant impetus to runaway erosion menace in Alaigbo is indiscriminate and injudicious disruption of ancient flood paths and channels during construction of road network that has increased markedly throughout the land in recent decades. New village streets and roads, which are often unpaved, are haphazardly constructed without paying attention to area topography and existing flood paths. The so-called streets and roads are built by simply bulldozing through existing structures, thereby disrupting well-established flood patterns and pathways.

In most instances, these new roads quickly become flood paths and channels that handle the bulk of floodwater runoff from a given community. In most parts of Alaigbo, rural roads have become so excavated by flood erosion that they have sunken several feet below the surrounding terrain. Streets and roads must be designed and constructed with the objective of never allowing floodwater to run on or through them. With careful study of area topography, it is possible to design roadways to coexist with natural flood paths and channels by the placement of culverts and gutters at early stage of the construction process.

Even with proper design and construction, roads still require adequate drainage and maintenance in order to avert rapid deterioration. Constant effort must be made to ensure that the roadway remains higher than the surrounding terrain. This height relationship reduces the likelihood of floodwater running into and washing away the roadway, particularly the unpaved one. It is thus easy to see that road maintenance without proper control of flood erosion is meaningless, especially to the soil type that we have in Alaigbo. In fact, erosion control and road maintenance are two sides of the same coin; they make each other whole. 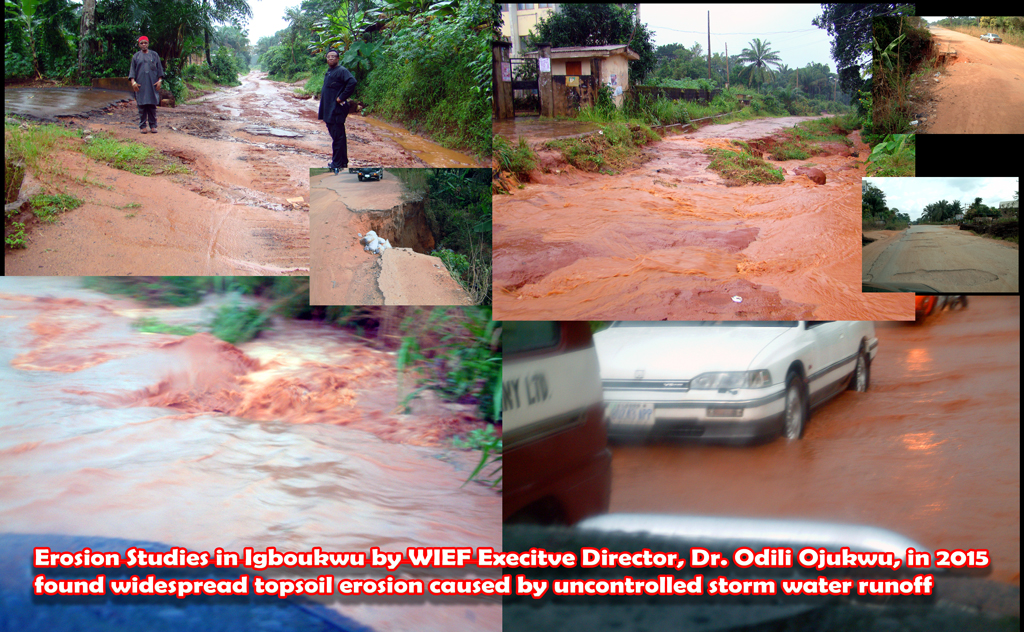 The establishment of new homesteads generates huge amounts of stormwater runoff which, in turn, causes widespread topsoil erosion within Igboukwu and contiguous territories.

The price for uncontrolled erosion is being paid daily in all villages, communities, local government areas and states throughout Alaigbo and beyond. Perennial devastation of transportation infrastructure by uncontrolled floodwater erosion makes it a tearful undertaking to move from point A to point B in Alaigbo, thereby stifling the socioeconomic advancement of the entire area. Denudation of our fertile topsoil, which took thousands of years to build up, exposes acidic infertile lateritic soil, which hardens on exposure to direct sun and becomes even more impervious for rainwater to penetrate.

We are losing our topsoil at such an alarming rate that, if nothing is done to slow down floodwater erosion within the next decade or so, the Igbo countryside shall begin to look like that of Haiti. Without topsoil, Alaigbo shall be unable to grow anything, not to mention feed its own people.

Culled for the website of the World Igbo Environmental Foundation (WIEF) – www.wief.net