Frank J. Gaffney Jr. is the founder and president of the Center for Security Policy (CSP), Washington, DC. In the 1970s and 1980s, he worked in various roles for the US federal government, including seven months as Acting Assistant Secretary of Defense for International Security Affairs during the Reagan administration. In 1988, Gaffney established the Center for Security Policy (CSP), a Washington, D.C.-based national security think tank that has been widely described as engaging in offering unique perspectives on America’s ideological, military and economic rivals around the world, particularly in the Middle East, Far East and the former Soviet Union. He is well-known in the circle of political conservatism; he has repeatedly featured at the Conservative Political Action Conference (CPAC) which is organized annually. Mr. Gaffney has been so consistently critical of extreme Islamist ideology, especially to the doctrine of fighting jihad as the preferred means for proselytizing the Muslim faith. For this, his detractors in official Washington have tackled his views as beclouded by “Islamophobia”.

ISIS got the undivided attention of the world when the little-known radicalized Islamist group suddenly overwhelmed the military formations of Northern Iraq after the soldiers simply melted away ahead of the advance of the murderous jihadists sweeping across the territory. A city of more than two million people, Mosul, fell to the jihadist fighters without even firing a shot. The shameful collapse of the Iraqi professional army and mass desertions quickly offered the ISIS a vast territory that encompassed eastern Syria and northern Iraq to control and rule over. The large assortment of weapons abandoned by the fleeing Iraqi soldiers fell into the hands of ISIS fighters thereby providing them with tremendous firepower that enabled them to resist all casual attempts to dislodge the terrorists by the hopelessly weakened national army. Sheikh Abubakar Al Baghdadi, the ISIS leader, proclaimed his creation of an Islamic Caliphate with its administrative capital in Mosul. It has taken the building of a multinational military force, enormous casualties and destruction of Mosul before most of the ISIS-controlled territory was recovered. 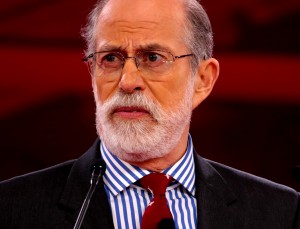 Frank Gaffney is the Founder and President of Center for Security Policy, Washington, DC and host of the Secure Freedom Radio.

Security experts worldwide are closely watching ISIS’ next moves. For the Islamist jihadists of this world, the goal has always been the establishment of an Islamic Caliphate in which Sharia shall be the supreme law of the land. When the ISIS was at its peak with Mosul as its capital city, a terrorist group operating in Northeast Nigeria, Boko Haram, pledged allegiance to Sheikh Al Baghdadi and thus became a de facto component of the Middle East-based terror group. With the ISIS militarily routed in the Levant by the retaking of Mosul and associated territory, many security experts are anticipating the quest to establish an Islamic Caliphate shall be relocated to West Africa. Current trends in Nigeria tend to back up the likelihood that the Islamic State of West Africa Province (ISWAP), which is the ISIS-affiliated side of the Boko Haram, is being prepped to stage a grand takeover that shall dwarf what had happened in the Levant several years earlier.

There are 12 states in Far North of Nigeria which have adopted the Sharia legal system of governance in the early 2000s. These states are home to Boko Haram, Fulani herdsmen terrorist militia and a limitless supply of lawless bandit groups which can readily be harnessed and deployed by ISWAP and ISIS in replaying the sort of military takeover that took place in Northern Iraq in a crisis-torn Nigeria. Nigeria’s military establishment and the incumbent President Muhammadu Buhari are accused of sympathizing with the goals of the Islamist jihadists operating in the West African country. As we speak, many believe that the fight to establish the Islamic Caliphate of West Africa, with its core in Nigeria’s Sharia Territory, has already begun. Islamist jihadists are enabled by Nigeria’s security apparatchiks to target and wipe out indigenous inhabitants of Middle Belt and Southern Nigerian communities who are Christians and nothing is being done to stop the massacres.

This is the source of Frank Gaffney’s grief. As a security expert, he sees the establishment of the Islamic Caliphate of West Africa not to be in the US’ strategic interest. He is, therefore, utilizing all his connections in official Washington, DC to stop the ongoing genocide and ethnic cleansing of Nigerian Christians by Islamist jihadist terror armies and the conniving Buhari administration on their paths before something terrible happens to the otherwise peaceful West African sub-region.