This is a wonderful time to make a comeback; I chose a long break, although circumstance brokered it, during my long break, I enjoyed viewing Game Of Thrones, I must confess my appreciation of Lord Petyr Baelish, as we already knew, he had brothels and that gave him access to information and from there, he became a perfect manipulator. He knew what the people want, and he uses the information to aspire for wealth and fame. In all fairness; that character is everything Nnamdi Kanu is in this his game of Biafra. I like Nnamdi Kanu as much as I like Lord Baelish; they are simply perfect in their games, even though it’s negative, I appreciate them so much.

Whenever it looks like Kanu’s fraudulent fire is going down, he knows how to add fuel deceitfully. Did you say Kanu was not getting it right? Did you stop giving him your money because you concluded he could not restore Biafra? Did you give praise to God instead of Kanu? Now, you have a reason to turn back and join his bandwagon of idiots.  That is the reason for this EU shame, lies and insult he brought upon Biafra. Had Kanu the opportunity to peep through the windows of EU building, given access or greeted a white man inside the building as Tony Nnadi repeatedly did in Washington, DC, the noise would have left me deaf. We saw everybody invited by EU speak on the floor, but those that announced their own invite ended up outside the premises of the EU without even addressing their members why they congregated. Had Kanu wasted time outside, he would have been disgraced by security men, sadly, whiter than white is no more.

Before we go to the next item, let’s hope you can still recall why Candy Stallworth, former IPOB mobilization officer, was sacked? She was sacked because she announced there was an invitation for referendum date to be discussed. But when the day came, for one reason or the other, she made a video outside the US  Congress building. Sadly, the following day, Nnamdi Kanu sacked her for what they termed fraud and deceit. Fast forward to date; Uche Mefor and Nnamdi Kanu are the masters of “Outside-the-building invitees”.

We all came to the conclusion that Candy Stallworth taking a video outside the Congress Building was not an invitation and also a fraud, but you agreed Uche Mefor taking his own video outside UN building was an invitation, you on 10th of September also agreed that another video taken outside EU building is an invitation. Indeed, this wisdom I see in you amazes me. I expect the leader of MASSOB and others to quickly rush in front of any notable building on the meeting day and take a video. But ever before that, they should announce their invitation by the body they choose to use their building for the video. 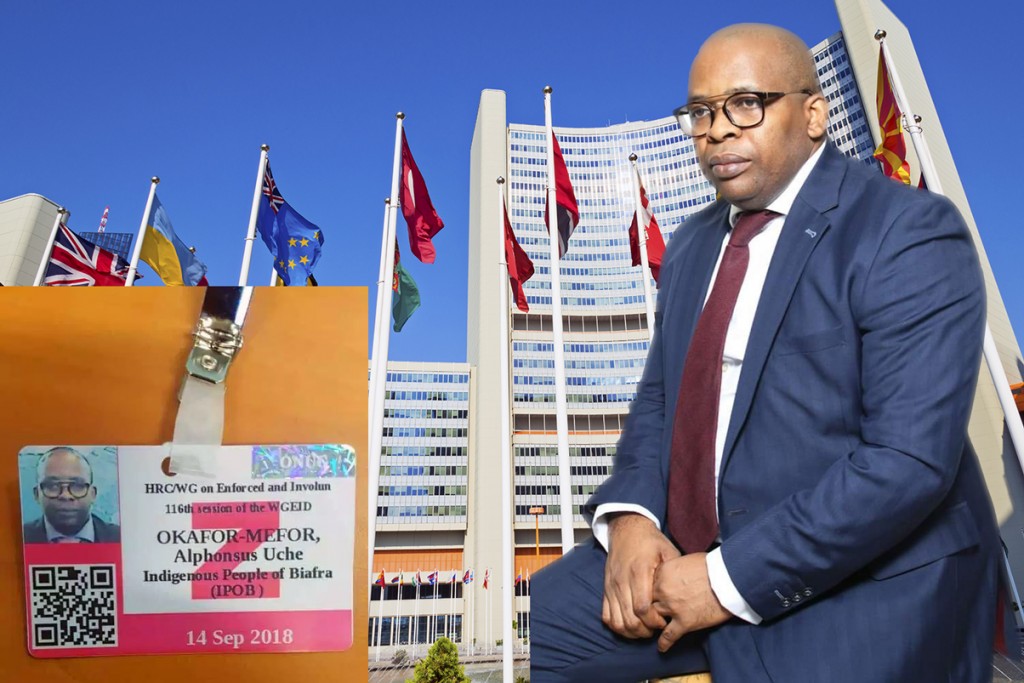 Deputy leader of IPOB, Uche Mefor, led a delegation to UN Vienna Office to petition against enforced disappearance of Nnamdi Kanu and his parents during Nigerian Army’s Operation “python Dance” of September 2017.

Now, Nnamdi Kanu’s desperation is killing the struggle. Not only are wise people taking our agitation for a joke, but they are also beginning to see that the people of Biafra are incapable of sustaining their sovereignty. If Nnamdi Kanu can say he was invited by EU and releases a video of him in front of EU building and few Biafrans believed to be a hoax, would it not be a mistake giving such unreasonable people freedom? Don’t you think those that can help Biafra may say you are not yet reasonable enough for independence and needs to stay under Nigeria to develop or have the ability to reason before helping?

Perhaps, I might be wrong in a way, knowing that Kanu has nothing to offer nor has something on the ground with which to restore Biafra, manipulating few IPOB members is an act of playing a useful role, at least, giving the people hope. Although it’s a false hope, let them enjoy it for the moment while other options are explored by those who are truly looking for freedom.

This is not the first time IPOB went to a diplomatic building and recorded videos to manipulate the people into believing they have something to offer and it would not be the last. EU will invite Biafra when the time comes. We would not announce the invitation; the EU will make the announcement that they invited us. We shall have a seat on the floor of the parliament, and we shall speak loudly. We shall not record videos outside the UN or EU buildings. Instead, BBC, CNN and mainstream media syndicates shall record and broadcast us speaking to the parliament.

We shall not stay in front of any building with security men ensuring we didn’t cross boundaries and shout MASSOB, IPOB, BNYL, BNC or any groups’ name. Instead, we shall address the world to tell them that we are ready to go and become a just and prosperous republic.

For now, lies can fly and let manipulations entice our hearts. It shall not last forever. The truth will locate us and bypass all these lies. I have not seen the end of Lord Baelish of Game of Thrones. I am certainly looking forward to it because it would be craftily served. Nnamdi Kanu shall someday look back and regret ever making a fool of our people. The few people he deceives today and tomorrow will only wake up the day the EU will truly invite Biafra to their Parliament. They will invite us to announce their support when the time comes.