Worldwide, there are over 2.38 billion monthly active users (MAU) of Facebook as of March 31, 2019. This is an 8 percent increase in Facebook MAUs year over year. This is compared to 2.32 billion MAUs for Q4 2018. This information is officially updated once per quarter. Put differently, as much as one-third of the world’s total population are on Facebook. Mark Zuckerberg, Facebook founder, had his hands full managing the rapid growth and expansion of his online miraculous creation which, most would argue, he had handled well and run profitably. With Facebook’s spectacular growth came social and economic power, especially for the founding owner.

Facebook previously came under public scrutiny whenever there were security breaches with Facebook users’ identity information. These incidents were easily brushed aside by Facebook management after issuing assurances that the breaches were limited in scope and appropriate remedial actions have been taken to prevent recurrences of such. The assurances issued last until another hacker gets into the mega data bank and steal more users’ IDs.

The Trump presidency brought an increased load of oversight responsibility on Facebook. The effective exploitation of the Facebook platform by the Russian government intelligence outfit to meddle in the US 2016 presidential election heightened public apprehension of the dangers posed by a runaway online-platform behemoth like Facebook as a tool in the hands of an American adversary such as Russia. It must be stated upfront that Mark Zuckerberg is not liable for contents shared on the Facebook platform. The Communications Decency Act of 1996 declares:
“No provider or user of interactive computer services shall be treated as a publisher or speaker of any information provided by another information content provider.” It is noteworthy that this law was already in the books before the emergence of Facebook.

Zuckerberg’s Facebook was extensively used by the Russian government intelligence operatives to influence the outcome of the 2016 US presidential election. Russia opposed Clinton’s candidacy while drumming up support for Trump.

But Facebook sees public complaints against it as something that might be costly to ignore in the medium and long terms. So, it went to work by taking some actions to convey the impression that sanitization of some information shared on the online platform has become the operational policy of Facebook. To demonstrate the seriousness of intent, Facebook’s once-secret list of content that can get you banned (https://cnb.cx/2vAW1Ai) was recently released, possibly in response to mounting pressure from the public for the social media outlet to become more accountable for what happens on its online platform. Algorithms predicated on the company’s emergent oversight standards were arbitrarily created for scrubbing some contents from the Facebook platform. The roaring debate on CNN’s Reliable Sources program of May 5, 2019 (https://cnn.it/2PNZrsP) is an indication that the new Facebook’s banning guidelines have not settled well with some vocal groups which have received the ax by being blocked unfairly from the online platform.

Many would agree that Facebook’s endeavor to increase oversight over the contents shared on its platform is well-intentioned. It also makes practical sense for the management to appear to be leaving no stone unturned in its bid to eliminate hate speech, violent graphics, pornography and indecent sexual conduct on such a publicly used social media platform. But many are beginning to add the voice of protest against their unjust earmark as “dangerous” users. There is definitely some problem with how Facebook’s new policies are implemented. From the way the setup functions in the interim, the oversight implementation appears to be a contest between human sensibilities and computer algorithms established to police the most popular social media outlet today. Many who are erroneously banned by artificial intelligence (AI) robots are unable to appeal their exclusion, it seems. It has thus become the dictatorship of the Facebook robot police sent to work with fuzzy guidelines that are liable to be misapplied against innocent groups and entities currently using Facebook.

The official website of the Lower Niger – USA (LNC-USA) website www.lnc-usa.org was recently blocked from sharing its publications on Facebook as the site has done since the 4th quarter of 2015. LNC-USA is a District of Columbia registered nonprofit corporation whose Articles of Incorporation preclude it from engagement in all the malpractices listed in the algorithms deployed by Facebook to checkmate undesirable posts on the platform. The first post from www.lnc-usa.org blocked from being shared on Facebook was an article written by a Catholic Reverend Father titled “In the Name of Prayer, All That Comes Out of Our Mouths Are Death Wishes to Imaginary Enemies That Don’t Exist Anywhere” (http://bit.ly/2Vs5TuA) published on April 23, 2019. The republished article written by the Catholic priest alluded to violence only in the context of the mass murders being perpetrated by the Fulani herdsmen militia against the indigenous peoples of Nigeria’s Middle Belt region who are mostly Christians. Some pundits feel that the Catholic priest was too harsh in his criticism of fellow Christian clergy who were blamed by him for misleading and exploiting their congregants for personal enrichment. Could it be the protest letters from these “offended” Christian clergy to Facebook that the latter’s robot police picked up to justify the exclusion of posts from the LNC-USA website till date? All effort to appeal this decision has come to naught. Whose interests are being served here, one must then ask? 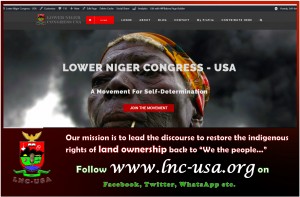 Lower Niger Congress – USA (LNC-USA) is a nonprofit corporation registered in the District of Columbia (Washington, DC) to pursue its nonviolent agenda to restore the stolen self-determination rights of the indigenous peoples of the Lower Niger in Southern Nigeria.

The debaters empaneled by the CNN Reliable Sources host, Brian Stelter, argued passionately that Facebook must endeavor to avoid dictatorial tendencies in policing its online platform because that shall be regarded as an infringement of the citizens’ right to free speech. Facebook is a private company and is thus not tasked with the chore of guaranteeing everyone’s civil rights and free speech. It was, however, strongly argued that since Facebook makes its wealth by selling the platform users’ personal information to advertisers and other end users at no cost to itself, the public has an important role in enabling the company’s spectacular success. Facebook, therefore, owes its billions of users not only flawless service but also unimpeded access for sharing their thoughts, sentiments and experiences as guaranteed by the universal doctrine of freedom of speech.

With pressure mounting against Facebook’s execution of what appears to be a good roadmap for sanitizing the contents shared on its online platform, it is expected that special care must be taken to assure that only those who deserve to the banned get the ax. Targeting self-determination agonists, who only publicize the mass killings of their people for the world to hear and see, is the wrong thing to do. Facebook’s interference with LNC-USA’s services to the victims of ruthless persecution in Christian-majority parts of Nigeria conveys the impression that the company’s owners and management staff could be colluding with the Islamist cabal ruling over today’s Unitary Nigeria. Immediate effort must, therefore, be made by Facebook and its staff to do a better job in sorting chaff from the wheat.