Facebook, Inc. is an American online social media and social networking service company based in Menlo Park, California. It was founded by Mark Zuckerberg, along with fellow Harvard College students and roommates Eduardo Saverin, Andrew McCollum, Dustin Moskovitz and Chris Hughes. It is considered one of the Big Four technology companies along with Amazon, Apple, and Google. Facebook offers other products and services. It acquired Instagram, WhatsApp, Oculus, and GrokStyle and independently developed Facebook Messenger, Facebook Watch, and Facebook Portal.

Facebook, as a private enterprise, reserves the right regarding who it chooses to let on to its social media platform or not. The company, therefore, is not liable for who get inconvenienced by its housecleaning operations. But it is also a fact that Facebook’s highly successful business model is predicated on the sale of personal information belonging to millions of its users worldwide without paying any compensation to the ID owners. On Facebook’s side, relatively unlimited access is provided for billions of its regular users without payment of subscription or service fees.

The above business model struck gold for the Facebook founder in a spectacular manner. Today, 2.38 billion users are on Facebook; that approximates to one out of every three persons living on earth. Last quarter’s income was nearly US$17 billion. These numbers show the enormity of sociopolitical and economic power that Facebook wields. Those who saw these potentials earlier on, such as the Russian government intelligence, were able to deploy the powerful influence of the online social media platform to impact the US 2016 presidential election’s outcome successfully, for example. The Facebook ownership and management staff denied any foreknowledge of the Russian scheme. It is generally believed that poor oversight on the part of the online platform operators and the availability of the unlimited number of tools that could be deployed in mischief-making as the main reasons to explain how the Russian scheme was able to work without being detected and stopped before irreversible harm could occur.

The Trump presidency is associated with increased public visibility for organized groups and vocal individuals with extreme beliefs, especially in the political right. Facebook was a choice platform for sharing and propagating hate speech, xenophobia, homophobia and outright racist propaganda by some groups. Robbers and mass shooters can record their heinous acts for sharing to the general public worldwide on Facebook. The recent mass shooting in a mosque in Auckland, New Zealand by a bigoted ultra-rightist ideologue was streamed on live video via Facebook while the shooting act was going on. Everyone expected Facebook to respond to these developing trends and the response inevitably came on schedule. A formerly secret document establishing the guidelines for banning “dangerous” users on Facebook was released. These guidelines led to the development of algorithms for overseeing contents from the billions of accounts to ascertain which ones to censor by banning from polluting the online social media platform. 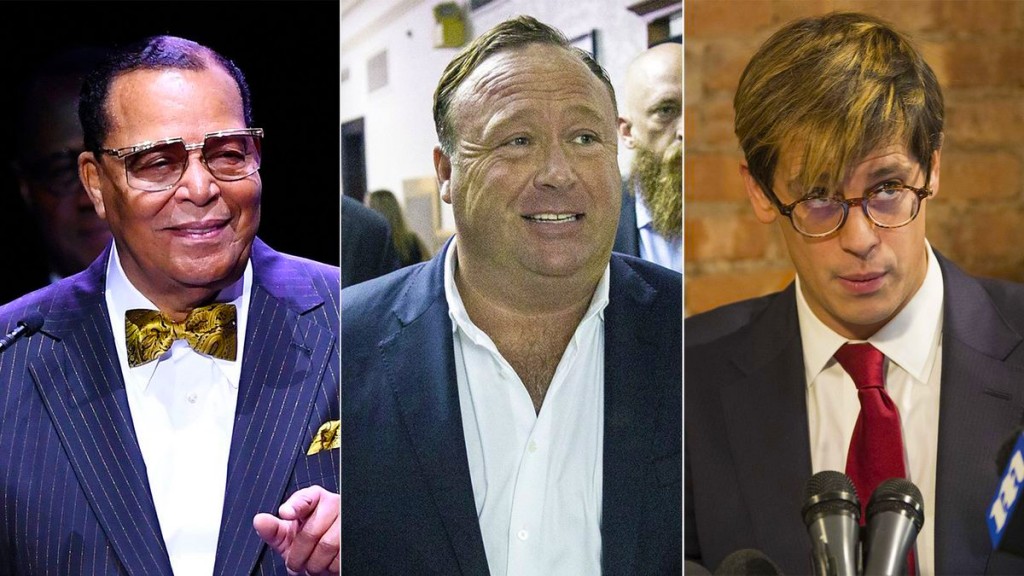 Facebook has the moral responsibility to assure that its platform shall not be utilized for propagating evil or disseminating information contents which abuse the sensibilities of others who are targeted with extreme views and rhetoric that are obviously hateful. It has also become Facebook’s burden to assure that heightened resentment and badmouthing from a significant proportion of its regular users would not be allowed to affect the company’s bottom line. That Facebook has to step up to keep things tidy within the house it has built is expected. Where the problem arises, however, is how Facebook goes about implementing its new policy.

As many would expect, Facebook targeted well-known individuals and organizations, especially those whose activities have contributed to heating up the United States’ polity. The instigators and propagators of extreme views from the political right such as anti-Semitism, religious intolerance, racial bigotry, homophobia, violence, pornography etc. were Facebook’s initial targets for banning from its online social media platform. To start with, the company removed right-wing extremists like Paul Nehlen, Milo Yiannopoulos, Paul Joseph Watson and Laura Loomer, along with Jones’ site, Infowars, which often posts conspiracy theories. Pundits allege that Facebook banned Farrakhan at the same time to create the impression that its choice of targets for banning wasn’t political. It was totally political, some persist.

“This was nothing less than election meddling. Everyone Facebook has banned [except Farrakhan] was instrumental in getting Donald Trump elected. This is punishment, this is a political purge, this has nothing to do with hate or violating terms of service”, alleges an opinion leader who strongly suspects Facebook to be executing the agenda of the US political left. “Leftists throughout the world are happy to move incrementally toward their authoritarian goals. Actions such as these bans are just such steps toward a world where speech is controlled by governments and corporations instead of by the people.”

Being a private company, Facebook is entitled to host whom it wants and ban whom it wants. But in the 21st-century world, social media such as Facebook, Instagram, and Twitter have changed the way the world communicates. And in America, the actions of Facebook and the others are decidedly un-American in that they are denying First Amendment rights to everyone. How long will it be until Facebook and Twitter decide that Rush Limbaugh, Sean Hannity, Fox News, The John Birch Society, and The New American are “dangerous” too?

The live debate on CNN’s Reliable Sources program of May 5, 2019 was inspired by complaints emanating from groups and individuals who feel that the implementers of Facebook’s new policy have wrongly targeted them in the social media platform’s ongoing sanitization program. The Lower Niger Congress – USA (LNC-USA) website www.lnc-usa.org is one of the sites banned from sharing contents on Facebook because postings from this source were said to “not meet community standards”. Later, the explanation from Facebook was changed to “because the site includes content that other people on Facebook have reported as abusive”. Other people on Facebook reporting content as abusive is as vague an excuse as can be to base meting out injustice arbitrarily to the likes of LNC-USA and others. The exclusion of posts from the site started on April 25, 2019 after sharing an article titled “In the Name of Prayer, All That Comes Out of Our Mouths Are Death Wishes to Imaginary Enemies That Don’t Exist Anywhere” (http://bit.ly/2Vs5TuA), written by an ordained Catholic priest.

Some pundits have opined that the Reverend Father was very harsh in his criticism of some Christian pastors who the former had blamed, in the same article, for misleading and exploiting their congregations for personal enrichment. How do complaints regarding an article written about Nigerian Christianity to Facebook instantly qualify LNC-USA and its website to be lumped together with the likes of Louis Farrakhan, the Nation of Islam leader; Alex Jones, host of right-wing conspiracy website, InfoWars; ex-Breitbart News editor, Milo Yiannopoulos, of hate speech and individuals or organizations that promote or engage in violence and hate in the same boat? Our research, thus far, shows that LNC-USA is the only website of its genre that has received the ax from Facebook.

LNC-USA is a nonprofit corporation registered in the District of Columbia (Washington, DC) and the organization’s Articles of Incorporation prevent it from engaging in acts that could be deemed to “not meet community standards” or in peddling “abusive” tirade in the public space. On the contrary, the Lower Niger Congress is a self-determination platform led by legal experts who are gung-ho about stopping the use of Nigeria’s geopolitical space as a slave encampment for the indigenous populations whose sovereign lands were taken away by force by imperial Britain and subsequently handed over to their Fulani caretakers. LNC-USA is a US-registered nonprofit corporation in good standing. Associating the term “dangerous” with LNC-USA is anathema because our leadership team speaks the truth and complies with the etiquette of polite public discourse at all times. 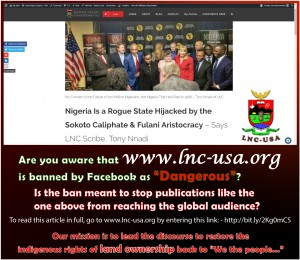 The Secretary-General of the LNC, Mr. Tony Nnadi, jointly addressed a world press conference with Christian Church leaders in Washington, DC to pressure the US Government to send a Special Envoy to Nigeria to assist in stopping the mass killing of Christians by the Islamist Fulani herdsmen militia and Boko Haram.

Here is the question of the century. Who paid Facebook or its employees to become a thorn in the flesh of self-determination agonists who are peacefully and nonviolently seeking their redemption from the murderous rampage of the Islamist cabal that has been enabled to take over and Islamize Africa’s most populous country? Most important is whose interests are the Facebook serving by proclaiming an innocuous mainstream outfit like LNC-USA and its website as “Dangerous”? Dangerous to who, one must ask?

The LNC-USA website (www.lnc-usa.org) is a leader in articulating, analyzing and projecting the self-determination quest of the indigenous peoples of the Lower Niger territory, in particular and rest of the enslaved stakeholders of today’s Unitary Nigeria, in general. Regarding this website and its advocacy message contents as “Dangerous” by the Facebook management and oversight team is a hallmark of injustice before God and man.