Feudal Ideology Has Deeply Penetrated the Fabric of Islamic North: The Poor Expect No Kindness, the Rich Extend None. – Ojo

My Experience, Shock in Appreciating the Burden We Share as Compatriots of Northern Nigerian Moslems

It was sometime in the early 90s. I was on a project in Katsina and the Director, a good-natured man, proudly invited me for Sallah.

The assault on my conscience, the distress caused to my mind and the questions raised but unanswered have lasted with me all this time. It was a huge relief at my host’s acceptance of an early exit, the only saving grace that prevented a puke.

Never before in my life had I experienced such differentiation of the human organigram and the dehumanization of the person.

A big bowl, roughly 2.5 meters in diameter, was. Filled with the local diet of “Fura de Nunu.” This was left out in the open for about 20 or more dirty, nearly starving men, fighting viciously with houseflies, all feeding with their bare hands from that bowl of injustice, regularly refilled by an attendant from a dirty bucket. The frenzy was vicious, you know, like a pack of dogs fighting and clawing at a common dose of bone. But these were no dogs. They were men like me, flesh, bone and blood. Memories still bring me nightmares.

But that was a generous “Big Man” spreading food palliatives for the festival, expecting a Yoruba man to marvel at a magnanimity that is the character of a Northerner.

The Problem with Northern Nigeria

I believe that the problem of Northern Nigeria is both ideological and historical. It is, I think, founded in a history of primitive feudal governance. The case is complicated by a system that has produced a crop of very well educated, exposed and experienced leaders untroubled by wrong, driven by greed and limited in the vision of tomorrow. They have stuck to injustice and revel in the distance it creates to make them look and feel taller than their natural-born brothers. They are unkind, disgraceful and unreflective. Most of the Northern leaders are made of such fragile stuff. That is the dreadful experience the otherwise more democratic South have suffered and continue to tolerate. The system of ultra-feudalism in the North is sharp and will crash that society. It is a grand separation of society into Aristocrats and Slaves. This ideology appears to have penetrated the culture and, more problematically, into the organic cells of the North. The poor expect no kindness; the rich extend none.

Mass poverty in Arewa/Sharia North starts from early childhood. High birth rate and high infant mortality in Muslim polygamous households end up with millions of children abandoned in early childhood to fend for themselves through begging and association with a plethora of Madrassa schools that abound in large urban centers. Lack of formal education and skills make the amajiri youths unemployable.

We did, in the first part of this discussion, allude to the three guardians of Northern entropy: incompetence, Ignorance and Superstition.

If you call my hypothesis of the problem of the North merely empirical, wanting for academic rigor and scientific analysis, you are right. But permit my wild postulation and remain at liberty to educate me out of my ignorance.

I have adopted this word in a fairly wide context so it is not used technically alone. These leaders are mostly educated, vastly traveled, adequately exposed to progress in other civilizations. Sadly, most have been sponsored into positions by patrons and matrons of tradition and ethnicity. They have, therefore no experience of the kind of exerting responsibility that creates or denies reasonable, measurable harvest, unlike many of their Southern counterparts who work and toil from the sweat on their brows, before they make a lousy Naira.

You will not believe it when I tell you that many have good certificates. Do you know, for example, that Governor of Kano, Ganduje has a PhD in something? And that Ahmed Yerima, the pedophile Sharia Governor of Zamfara has a Masters degree in Economics and worked in Central Bank?

Yet, these leaders demonstrate deep moral and technical incompetence. They display complete moral vacuity in the affairs of their people, choosing only to feather their narrow personal nests. Technically, they demonstrate complete blindness of vision, uncaring attitude to setting goals and irresponsible managerial incompetence in managing projects

Leadership starts from a passion to change life and get society from a point to a higher level by clear definition of intentions gathered from a study of requirement and needs. The leader has a vision of where to pilot the people, he defines goals. He designs methods of doing this by crafting strategies. He appoints the right fit of human resources to implement goals through and finds credible tools to measures performance. Northern leaders generally don’t appear to be technically competent, they don’t think they need to be, and seek only to promote personal goals.

If money could buy competence and build a bulwark against pain and suffering of a people, the North would be an El Dorado. In the Guardian Newspaper of 24/7/17, a summary of income to Northern Nigeria was discussed.

“in the 10 years between 2007 and 2016, successive Northern governors have received over N12 trillion in federal allocation on behalf of the 19 states and its 413 local government areas excluding FCT,” according to the data sourced from the office of the Accountant-General of the Federation. The breakdown of the allocation from 2007 to 2016 reveals that states in the Northwest, North East and North Central have received a total of 3trillion, N2.5 trillion and N2.2 trillion respectively. And out of the over N10 trillion allocated to the 774 Local government, Northern states received more than 50 percent of the funding. I know what you are thinking. What do they do with this money? Where is the evidence on ground?

Where Did All the Money Go?

Yoruba proverb will be useful here:

The asymmetry in the balance of the bucket is sourced from the imbalance in the carrier’s legs.

Governors of the North have been building gigantic palaces for Emirs in place of hospitals, hundreds of mosques with sky-high minarets instead of schools in order to keep the people preoccupied praying. And they have been marrying wives for themselves and helping the poor to marry their own and produce abandoned children carelessly.  In the process, they procreate like laboratory rabbits and sustain habits that can best be described as atrocious.

Zamfara and the Emir’s Palace

In November 2017, Governor Abdul Aziz Yari of Zamfara state inspected the new palace of the Emir of Gashua being built at a cost of N505 million Naira. NAN reported that the new palace is just one of the many modern palaces being built by the Government with spacious reception halls, dining room, Emir’s wing, and Guest wing. It also includes boys’ quarters, girl’s arena, Sarkin Gida and Sarkin Dogari, mosque and perimeter fence.  There is no standard hospital in Gashua. This is standard practice in the North. 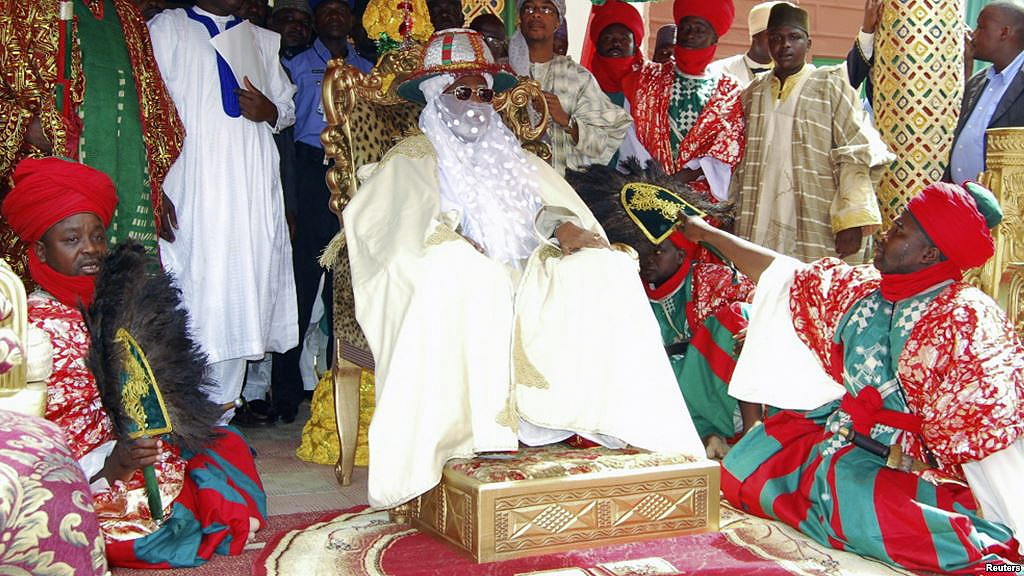 In December 2018, Governor Mohammed Badaru Abubakar of Jigawa State opened a tender from contractors to build 95 mosques across 30 constituencies in the state. Many of the few schools in that state have dilapidated roofs and only a few have chairs and desks in their unkind classrooms. This was a state which, according to the Debt Management Office (DMO), had a debt of 48.3 billion to pay to the Federal Government. This is standard practice in Muslim North

In 2017 alone, state governors of Northern Nigeria claimed they spent $376,774.125 dollars to sponsor Muslims to the Hajj Holy land. Yet no portable water exists in any of these states. These sponsorships are mostly for influential and rich political associates and acclaimed village thugs of political value. This is standard practice in the North

According to Premium Times of May 4, 2019, the Government of Kano State under the leadership of Governor Ganduje, organized a mass wedding for poor, jobless and hopeless couples across the 44 Local Government Areas. A statement signed by Chief Press Secretary to the Governor, Abbar Anwar, 20,000 would be given to each couple, Beds on which to consummate the project will be bought for each, with sets of cushion chairs, side mirrors, and mattresses. Also, new clothes known as “Shadda” would be provided for each husband so they can be happy and share their joy with family and friends. No mention was made of jobs provided these poor people to maintain their new status. That is standard practice in the North.

On 30th May 2019, a day after his swearing-in, the new Governor Mai Mala Buni of Yobe State performed his first official function in Government House. He took a third wife. Ummi Adama Gaidam, a student of some unmentioned course in Saudi Arabia was the daughter of the former Governor. Ummi was an addition to his growing Harem, and a promissory note from the old Governor to cement the Government House to the family.

Similarly, just a few weeks after his swearing-in, new Governor of Bauchi State, Bala Mohammed flew into Lagos to marry a Lebanese wife at the Syrian Mosque in Ikoyi. When that lady landed in Bauchi, all the new Commissioners were at the airport, filing in line to welcome the new wife. Though wife no 2, she would be carrying out the duties of the First Lady as the first wife was not educated enough to speak correct English.

They were following in the typical footsteps of Northern predecessors in various Government Houses who marry in such “wife for political favor” fashion. On the average, a Governor houses at least three wives in Government House, each ”

Taraba Governor, Danbaba Suntai, was brain-damaged following an accident sustained when he crashed a private but state-procured plane. Cessna 208, 5N-BMJ. When did he become insane? Before or after his plane crash? For, how would a Pharmacist governing a poor state like Taraba go ahead to purchase aircraft and start flying like a commercial pilot?

After he was sworn in as the Governor of Taraba State on 29 May 2007, he acquired a Bell helicopter and 2 small airplanes – a Cessna 208, 5N-BMJ and an Embraer ERJ-145 jet. The Taraba State Government reportedly acquired the Embraer ERJ 145 with about $21m (N4.13bn, at the exchange rate then).

The Accident Investigation Bureau (AIB) said: “The pilot was not qualified to fly Cessna 172 and had total logged flying hours of 58 hours 40 minutes. “The pilot had no relevant endorsement to fit Cessna Caravan 208B. The pilot does not have instrument ratings and night flight privileges.”

Governor Sherrif and His Jets

Former Borno State governor, Ali Modu Sheriff, purchased a top-of-the-range Gulfstream G650 private jet at a whopping cost of N11.5bn ($72m) bringing the total number of aircraft in his private fleet to four. Alhaji Sheriff, 57, served as governor between 2003 and 2011 and has been widely blamed for allowing Boko Haram to take root in Nigeria as it was during his tenure that the terrorist sect grew in Borno State. Since leaving office, however, Governor Sheriff has taken refuge in Dubai amid fears that he may be targeted for elimination by Boko Haram. These guys flaunting private jets make their states pay maintenance, take off, landing and packing fees wherever they may go.

Those still not ready, or just still waiting or rather, building up a war chest simply go for charter flights for trips that are easier conducted on existing commercial airlines. Amounts ranging from $18,000 to $20,000 per roundtrip for flights between Lagos and Abuja are common. Any waiting period more than 3 hours attracts an additional $ 500.00 surcharges according to investigations.

When the North collapses, it will come from within.

We shall arrive at the concluding part when we look at ignorance and superstition soon.