All Are Shifting False Narratives to Conceal Armed Invasion, Islamist Jihad & Land-grab Motives of the Fulani. – by Tony Nnadi

The recent claims by one Dr. Abubakar Siddique Mohammed, the Director, Centre for Democratic Development Research and Training, Zango Shanu, Zaria regarding the factors responsible for the rapidly escalating mass killings and criminality across vast swathes of territory in Northern Nigeria, now heading Southward are a mere decoy for the uninformed. It is part of a carefully choreographed narrative offensive being driven by minders of the murderous Fulani Caliphate in Northern Nigeria to disguise their armed conquest and colonization campaign laced with jihad.

Unfortunately, many observers, especially in the international arena, get very easily deceived by these roguish merchants of deceit who also engage expensive lobbyists and publicists to market their falsehood to many decision-making bodies across the globe.

This paid false-narrative peddling, which offers masquerades as lobbyists in Washington DC, was how the atrocious activities of the notorious terror machine, Boko Haram, got downplayed by the Obama administration which inexplicably refused initially to categorize the insurgent jihadists as a “Foreign Terrorist Organization” (FTO). Boko Haram had wreaked gross mayhem which included the bombing of the United Nations’ Building in Abuja, openly pledging allegiance to ISIS and rapidly mutated to the West African franchise of ISIS under the codename ISWAP (Islamic State, West Africa Province). It took the global outrage that greeted the 2014 Chibok girls’ abduction to persuade them to roll off the heavy stone which the lie-peddling lobby merchants had placed to block the official US policy vent.

Boko Haram went on, nonetheless, to clinch the coveted title of being the number-one terrorist organization in the world. The lobbyists then started peddling the false narrative of mass poverty in Northeast zone, which required only the infusion of fresh economic life into that devastated part of Nigeria, as the panacea for rendering the Boko Haram redundant. In unison, just like a drunken sailor, the UK, EU, UN, US, World Bank and many other developmental and aid agencies rushed in with billions of US dollars in economic investments to cure Northeast Nigeria of terrorist insurgency that sprouted there. They all forgot that Muttalib, the Christmas-Day suicide bomber over the skies of Detroit, is from Northern Nigeria and is the son of the Chairman of one of Nigeria’s major banks.

When the Buhari administration arrived in 2015, it officially adopted the Boko Haram-infested Northeast Nigeria as the primary destination for all available foreign development funds designated for Nigeria. For reasons not difficult to fathom, the foreign donors all obliged President Buhari’s wish.

Then came the rampaging Fulani herdsmen militia which had won the fourth-place trophy on the Global Terror Index. The same falsehood merchants wearing the badge of lobbyists and paid by vested Fulani beef-cattle interests went to town with the concoctions of farmers/herdsmen clashes occasioned by the impacts of climate change.

Fulani herdsmen terrorist militia is well-equipped with AK47 rifles and other military-grade weapons. The paramilitary outfit is being sponsored by Myetti Allah Cattle Breeders Association of Nigeria (MACBAN) to procure and secure fresh grazing pastures and cattle routes that link them in Middle Belt & Southern Nigeria.

With the conundrum of the “Fulani” prefix to the killer herdsmen, however, the terror categorization came a bit sooner than it did for Boko Haram, possibly due to the avalanche of evidence pouring out from the survivors of the carnage wreaked by the “Herdsmen”. The March 2018 bombshell by Nigeria’s Former Chief of Army of Staff, General T Y Danjuma, pointedly accused Buhari’s Unitary government as well as the Armed Forces of Nigeria under its control of COLLUDING with the murderers and FACILITATING the terrorists’ operational movements. Thereafter, it became difficult to maintain that line of false narrative. Accordingly, their spin masters had to construct other false narratives.

The cascade of lies shifted from:

There was an earlier false narrative of:

The four false narratives above are aimed, by their Caliphate creators and peddlers, at covering up and casting the shroud over the ETHNIC CLEANSING going on and the LAND-GRABBING motive behind the Ethnic-Cleansing campaign. The obscureness of truth provides cover for the resurgence of Islamic JIHAD which their Fulani ancestor, Sheikh Uthman Dan Fodio, had started in 1804.

Stripped bare, the aim is for the FULANI to kill off the indigenous nationalities of Nigeria in order to permanently take over the ancestral lands and water resources of the country’s indigenous peoples for the immigrant Islamist nomads’ exclusive use.

Anyone who swallows any of the four false narratives listed above will neither see the parochial interest of the Fulani behind the spreading violence nor will the person see the plain TERRORISM wearing the garment of JIHAD which facilitates the murder-driven CONQUEST and COLONIZATION campaign of the invading Sokoto Fulani Caliphate and the ultimate goal of the murderers.

Anyone who wants to understand or tackle the problem can see more clearly with the aid of the precision telescope provided by the General T. Y. Danjuma’s March 2018 charge of COLLUSION by the central government of Nigeria and its security apparatchiks with the murderous Fulani herdsmen in their ethnic-cleansing campaigns. This, in addition to a plethora of other evidence, including the actions and pronouncements of principal officers of the so-called “Federal Government” (Including Buhari, the Chief of Army Staff, Buratai, the erstwhile IG of Police and the Buhari’s Spokesman, Femi Adesina) clearly establishes who is behind the killings. Precisely, the FULANI are the villains in this deadly plot. 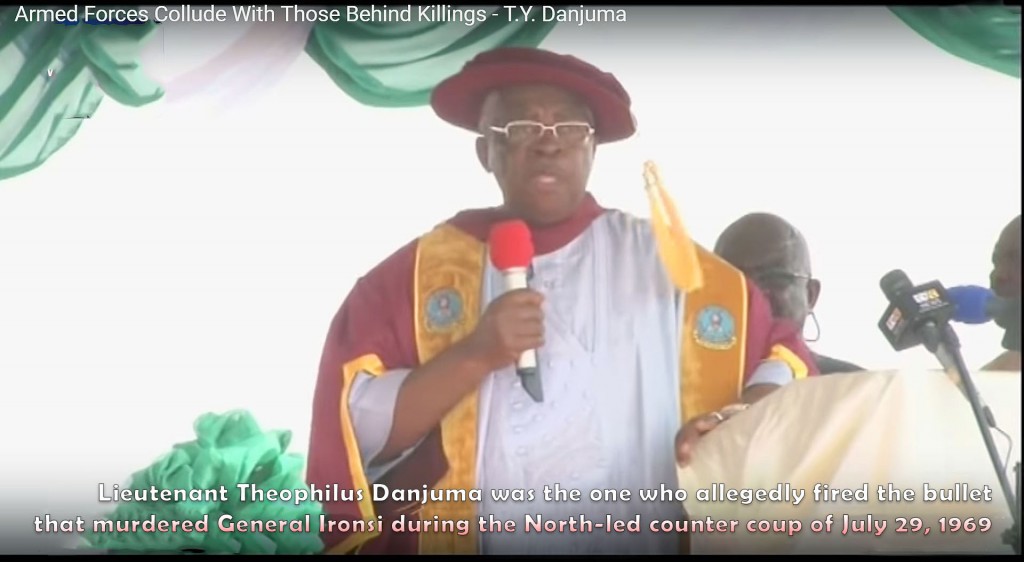 Theophilus Danjuma is a Christian from Taraba state in the Middle Belt region of Nigeria. He obviously saw himself as a bonafide Northerner 50 years ago when he played a leading role in the North-led counter-coup of July 29, 1969. He now knows better, hence his current public pronouncements.

In the same vein, in addition to a deluge of other evidence, the May 29, 2019 “Fulanization and Islamization” charge by Nigeria’s former president, Olusegun Obasanjo, point clearly at the ulterior motive of the Fulani-controlled government-backed murderers. The end goal is to enable the Fulani to permanently take over the ancestral lands of the indigenous peoples of Nigeria and then become the new owners.

Between the establishment of who is perpetrating the mass murders and why they are doing the killings, the four false narratives are exposed as the falsehood and mendacious decoys they are.

This latest false narrative of countrywide banditry and criminality is clearly designed to create the impression that bad governance in Nigeria has led to a revolt of the poor.

Curiously, throughout today’s Nigeria where kidnap victims are abducted along the country’s dilapidated highways, everyone come back with tales of Fulani being the kidnappers, even in Nigeria’s South. This unmasks the lie about the “Countrywide Banditry and Criminality” narrative.

The Lower Niger Congress (LNC) asserts positively and unequivocally that the ongoing deadly violence all over Northern Nigeria (and now spreading Southwards) is the attempt by the Global Islamic Caliphate led by ISIS to seize the West African sub-region, particularly Nigeria that has already been captured, courtesy of the Boko Haram, as its strategic operational base. This shall become a fulfillment of a mission which ISIS could not accomplish in Iraq and Syria (the Levant). If the global community, particularly the United States, does not configure and deploy a solution package sooner, the cost will be prohibitive when the Global Islamic Caliphate, now operating under the codename ISWAP, digs in and sucks in the ungoverned spaces in Chad, Niger and Northern Mali – all satellite playgrounds for a radicalized and Islamized Nigeria.

The LNC and its MNN alliance partners’ engagement with the monster-in-the-making offers the global community a quarantine plan to isolate and contain that bête noire preemptively if only it can be properly identified and isolated while the opportunity to do so still exists.