General T. Y. Danjuma Should Speak His Mind Openly, Not in Private as He Suggests – Admonishes Fani-Kayode

A Word for General T.Y. Danjuma: Southwest, Southeast & Southsouth Have Spoken and Fought Against Buhari Than Any Middle Belter or Northerner

I am not a Yoruba but an Anago. I am a proud son of Oduduwa. I appreciate General T. Y. Danjuma’s contribution, but he is wrong about one thing – not all the Anagos and sons and daughters of Oduduwa have “lost their voices”.

When he joined forces with others to bring the plague called Buhari to power, we warned them that it was a grievous error and that they should back Jonathan instead. They refused to listen and instead stood with Buhari. Ever since Buhari came to power with their support in 2015, some of us from the Southwest have been fighting him and speaking out against him openly and fearlessly.

I agree that there are some traitors like Bola Tinubu, Yemi Osinbajo and others in our midst. Still, they are a decreasing minority who are bound up and lost in their own slavish servitude, inexplicable greed, grave delusions and morbid fears.

To them, Buhari is a God. But to us, he is nothing but a tinpot dictator with feet of clay. To them, the Fulani are to be worshipped and were born to rule. But to us, they are no better than any other ethnic nationality in Nigeria and we did not come into the world to be their slaves.

For the last five years, many of us have been as constant as the North Star, have refused to collaborate and have never lost our voices.

As a matter of fact, instead of losing our voices, we actually found them and rose to the challenge despite the grave risks and challenges we are facing.

Despite those risks and challenges, we remain committed to standing against the evil called Buhari even at great risk to ourselves and our families and many of us have been persecuted ruthlessly for doing so.

Unlike others, some of us did not have a hand in bringing the monster called Buhari to power and we did not support him in 2015 or 2019. As a matter of fact, the Anagos and sons and daughters of Oduduwa gave Jonathan and Atiku more votes in 2015 and 2019, respectively, than Danjuma’s Middle Belt, the Southsouth or the Southeast. Go and check out the figures.

Again, more leaders in the Southwest, Southeast and Southsouth have spoken and fought against Buhari than any Middle Belter or Northerner since 2015. Gallant and strong men and women like Nnamdi Kanu, Tony Nnadi, Asari Dokubo, Shola Salako, Deji Osibogun, George Akinola and others stand out. 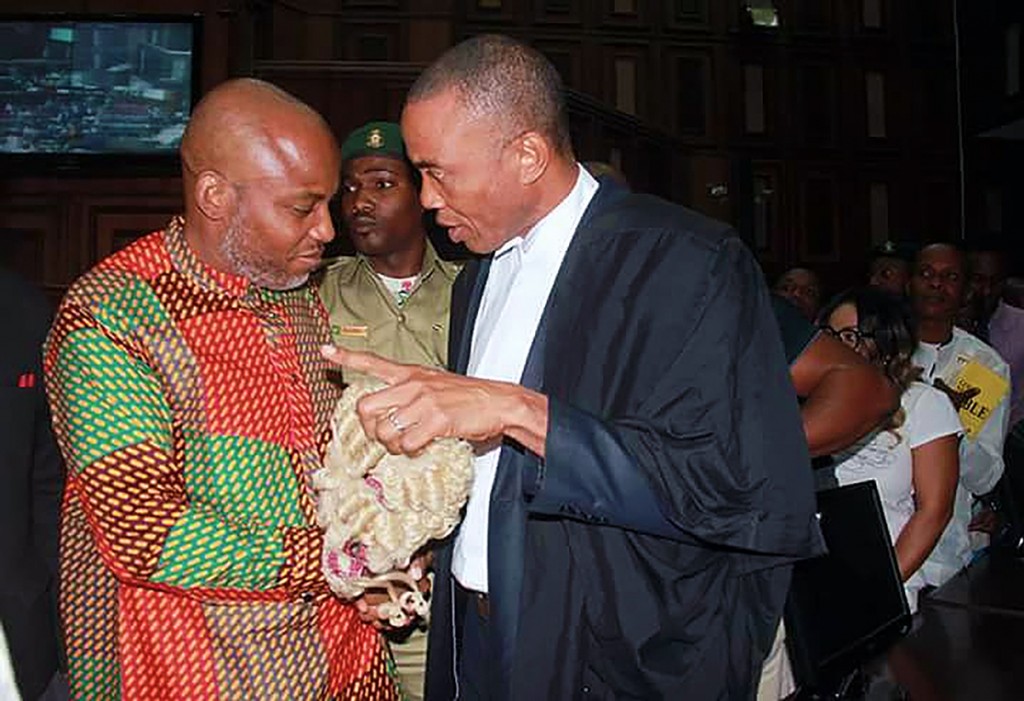 On the left is Nnamdi Kanu of Indigenous Peoples of Biafra (IPOB) and on the right, is Tony Nnadi of the Lower Niger Congress (LNC) at the Abuja High Court.

Apart from that, millions in the Southwest have spoken out and suffered for this noble cause of opposing tyranny. I, as an Anago and a son of Oduduwa, am very proud of that.

I say again; we never lost our voices, but rather, we found them and we will continue to fight and speak against Buhari until he leaves office or until we die.

Permit me to conclude with the following.

Would someone, please, tell General T. Y. Danjuma that, if he wants to talk, he should talk! He should not do so in private. He should do so openly and publicly. Nigerians have already lost their sleep!

We are already a vassal state being run by crude barbarians and we have nothing more to lose. He should talk now before it is too late. Or forever, hold his peace!