The governor of Ondo State, Arakunrin Rotimi Akeredolu, cannot determine the fate of Ondo State in the proposed Oduduwa Republic, a Pan Yoruba group said on Tuesday in a letter delivered to the Governor in his Akure office.

In a statement signed by its Ondo State Coordinator and Secretary, Apapo Oodua Koya (AOKOYA), a pan-Yoruba coalition, said Akeredolu was arrogating to himself the power and principalities he lacks.

The Governor had said on Monday that no inch of Ondo State would be part of Oduduwa Republic.

But AOKOYA said Akeredolu represents the All Progressives Congress (APC) and the vested interests of the Fulani caliphate.

“The APC is not the same as the 4 million people of Ondo State”, AOKOYA said.

In the statement signed by Captain Mufutau Adetiloye (rtd), the AOKOYA Ondo State Coordinator and its State Assistant Secretary, Mrs. Anike Akinbobola, the group said that Akeredolu is not the leader of the people of Ondo and that he only has a terminal mandate of eight years which is nothing compared with the past, present, and future of the people of Ondo State.

“There are various logical reasons why you, Akeredolu, cannot speak on behalf of 4 million people of Ondo State. You were the elected Governor, but that does not give you overall legitimacy over the future of the people of Ondo State and their relationship with the greater Yoruba nation.

“Your mandate is only four years. It does not extend to the right to self-determination of the people of Ondo State as entrenched in international laws”, the group said.

AOKOYA said, “You, Akeredolu, in 2020, compared with registered voters, you have only 15 percent mandate.  Legally speaking, you have no legitimacy over the people of Ondo State. With 292,830 votes out of a registered voter population of 1,546,081 voters, you, Akeredolu, are a usurper.  This is against the background that 99 percent of your votes were stained with corruption and the red ink of illicit money. Voters were bribed to secure your mandate. You have a stolen mandate that has no real legitimacy in a genuinely democratic country. The fact that 292,830 people voted for you out of 1,546,081 registered voters is a vote of no confidence in the rogue process that produced your stolen mandate.

AOKOYA said, “You represent fraud. You represent shame and dishonor. You represent Nigeria, a country where leaders literarily feed on the blood of their people, a country categorized as the axis of evil, a country that murders innovation and produces leaders through violence, treason, stealing and unparalleled corruption of the voters.”

AOKOYA said that Akeredolu is a conscious enemy of Yoruba people who is ready to sell his people to slavery for peanuts. 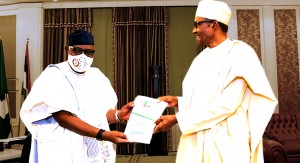 Gov. Akeredolu (left) of Ondo State at the Aso Rock Villa, Abuja, to frolic with President Muhammadu Buhari while his fellow Yoruba stakeholders are being murdered, raped and kidnapped by Fulani terrorists invading the farms and woodlands of Oduduwa. Akeredolu belongs in the same party, the APC, as the president.

“One million of you cannot stop an idea whose time has come. You are bragging about a stolen mandate bought with blood money. You sit on a seat stained with the blood of innocent people. You hijacked the legitimacy of the people and you defend it, not with the will of the people, but with guns and bullets purchased from the sweat of ordinary people.”

AOKOYA said Akeredolu has now granted the ancestral land of Ondo people to Fulani terrorists adding that he has been intimidated and could not fight for his people knowing he got to power through a process akin to a horrendous crime against humanity.

“The Fulani who funded your campaign have chained you, handcuffed you with fetters of iron, but you cannot equal your fate with the fate of Ondo people.”

The group said further – “You are a lawyer, educated, but you lack common wisdom. You are far away from the fears, aspirations, and resolve of your people to be free. You are in power because the Fulani crooks imposed you on unwilling people. You have no conscience. You know deep in your heart that you paid voters in order to win the election. You should be ashamed of yourself. The fraud you represent is destined to collapse right on your face and you will face the harsh wrath of history at the fullest of time.”