Group Deliberating Over Nigeria at 2019 US Department’s Religious Freedom Ministerial Urges US Govt. to Stop Genocide on Christians

US State Department Hosts Its 2nd Religious Freedom Ministerial Roundtable: Genocide Against Nigerian Christians by Jihadists Spotlighted in a Special Side Event

During July 16-18, 2019, the U.S. State Department hosts its second Religious Freedom Ministerial in Washington, DC. This event builds upon the first Ministerial and is for a broad range of stakeholders, including foreign government officials, international organizations, religious leaders and social activists, who will address the challenges facing religious freedom as well as recommended best practices to advance religious freedom for all. The Ministerial to Advance Religious Freedom brings together leaders from around the world to discuss the challenges facing religious freedom, identify means to address religious persecution and discrimination worldwide, and promote greater respect and preservation of religious liberty for all. This event focuses on concrete outcomes that reaffirm international commitments to promote religious freedom and produce real, positive change.

The International Religious Freedom Roundtable (IRFR) is a convener of NGOs and individuals from any country in the world and all faiths that work for freedom of religion or belief. IRFR launches multi-faith initiatives and letters that any participant group proposes. The entity meets regularly, both exclusively as NGOs and together with government representatives. Working groups allow the NGO to focus on specific issues, regions, or practice areas. Roundtables around the world are being set up to confront persecution, secure rights, and coordinate civil society across ideological and religious differences.

The Marvin Center at the George Washington University campus, Washington DC, was the venue for hosting a special IRFR Side Event titled “Unraveling the Challenges of Trans-Regional Terrorism, Ethnic Cross-country Migration and Sociopolitical Marginalization of Indigenous Nigerians” and scheduled to run concurrently with the main activities at the US State Department. This Side Event was hosted by LiftUpNow Foundation and the Nigeria Working Group. The event brought together local experts, top government functionaries, NGO leaders, sociopolitical activists, and concerned citizens to discuss Nigeria’s internal social conflicts that have led to the country’s designation of “country of concern”. Guest Speakers at the Marvin Center event were:

The Chairman of the Nigerian Christian Elders Forum (NCEF), Solomon Asemota, SAN, who is a legal luminary with a lot of insight regarding politics Nigeriana, contributed the viewpoint that the Nigerian nationhood is still salvageable, but critical constitutional reforms to put in legal firewall against the arbitrary hijack of citizens’ rights are guaranteed at all times must come first. 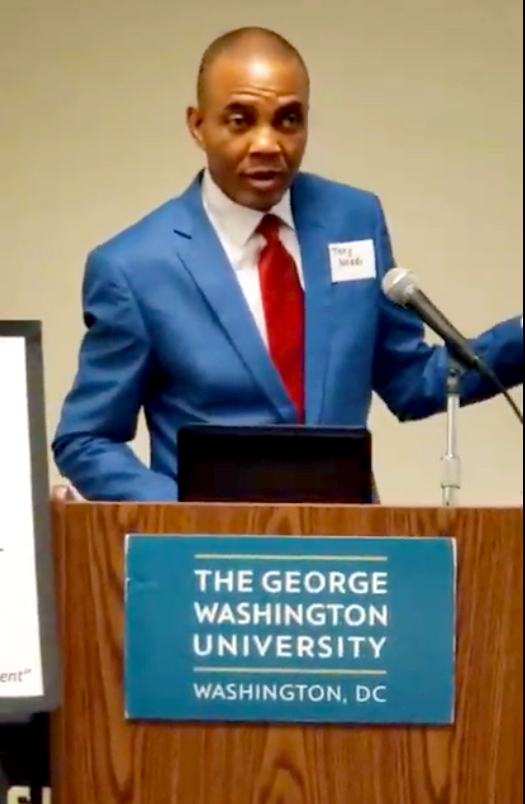 Mr. Tony Nnadi, Secretary-General of the Lower Niger Congress (LNC) speaking at the Side Event of the 2019 State Department’s Religious Freedom Ministerial in Washington, DC on July 16, 2019

Mr. Nnadi and other speakers at the event reiterated that religious intolerance in Nigeria is driven mostly by the country’s past history of Fulani colonization, especially in the North, long before the British colonial rule which coupled together the ethnic nationalities that comprise today’s Nigeria. The Fulani aristocracy, though subdued militarily by imperial British forces, was still granted the special right to rule over the vast territories of Northern Nigeria on behalf of the colonial administration. At Independence of 1960, the leader of the Sokoto Caliphate, Alhaji Ahmadu Bello, had reminded his fellow Fulani that a self-ruled Nigeria must be seen as the inheritance from their great grandfather, Sheikh Uthman Dan Fodio, who spearheaded the Islamist Jihad (1804-8) that resulted in the conquest and takeover of the Hausa kingdoms that held sway over Northern Region for centuries. The presidency of Muhammadu Buhari, a well-known Fulani irredentist, has emboldened Fulani nationalists to advance the age-old quest to militarily subdue the Nigerian geopolitical space and then Islamize the entire country.

Mr. Nnadi started by presenting the ambitious map created by the ISIS which depicts the terrorists’ aspiration to build an Islamic Caliphate that covers a large contiguous territory that spans the continents of Asia, Africa and Europe. Nigeria-based Boko Haram had earlier given its allegiance to the ISIS and a faction of this terrorist outfit, the Islamic State for West Africa Province (ISWAP), is fast becoming the new hope for the anticipated relocation of the proposed Islamic Caliphate to the West African sub-region after the recapture of Mosul, Iraq from the jihadist occupiers. Twelve states of Northern Nigeria have adopted the Sharia legal system as the preferred model for governance in their jurisdictions. For easy of reference, the 12 contiguous states are designated as the “Sharia Territory”. The Sharia Territory is home to the Boko Haram and the deadly Fulani herdsmen militia – the 1st and 4th most deadly terrorist groups in the world. There are also bandit outfits which belong to neither group but constitute a nightmare to the indigenous inhabitants of the area who get killed, robbed, raped and chased away from their ancestral lands.

The collapse of rule of law and order is blamed to be the underlying cause that enables the environment where religious intolerance and persecution of Christians are being humored and the political ideology and tools for sharing unearned privilege on the basis of tribal and religious loyalties seem to be the norm. An Islamophilic constitution was imposed on the rest of Nigerian constituents in 1999 by a Fulani general, Abdulsalami Abubakar, through the passage of a military decree, Decree No 24 of 1999. The Buhari presidency is determined to exploit all the available loopholes in this imposed constitution to effectuate a complete takeover of today’s Unitary Nigeria under the Sharia legal system dominated by the Fulani aristocracy. Stakeholder indigenous peoples inhabiting the remaining 24 out of the country’s 36 states have, individually and collectively, denounced and repudiated the imposed 1999 Constitution, but the Fulani ruling cabal has left no stone unturned in a bid to perpetuate the status quo. According to the LNC scribe, addressing the escalating spate of genocide and ethnic cleansing targeting Christians shall remain futile without first jettisoning the 1999 Constitution and writing a brand-new one to replace it by “We the people…”.

The Chief of Staff to the Governor of Benue State, Nigeria, Rt. Hon. Terwase Orbunde, identifies the Fulani penchant for land of ancestral grab as the primary motivator of the genocide and ethnic cleansing of Middle Belt Christians being implemented by well-armed terrorist jihadists. He clarified that there is nothing like “pastoral/famer clashes” in Benue state because there is always only one aggressor and one victim at all times. Hundreds of Benue residents were attacked while they slept in their homes at dead of night. The well-organized killer herdsmen/jihadists carry AK47 assault rifles while the victims are unarmed farming communities. He explained that the Benue State Assembly, under the able leadership of Governor Samuel Ortom, wrote, approved and enacted the Open-Grazing Prohibition and Ranching bill. Confining cattle herding to ranches was portrayed as the best means to minimize incidents of trespass on farmlands by nomadic herdsmen engaged in open grazing. He disclosed that the states of Taraba and Ekiti have also passed their own bills to checkmate open grazing of livestock and to encourage adoption of ranching methodology as the best practice for raising and herding cattle and other livestock. He persuades all the other states to follow the examples of Benue, Taraba and Ekiti states. 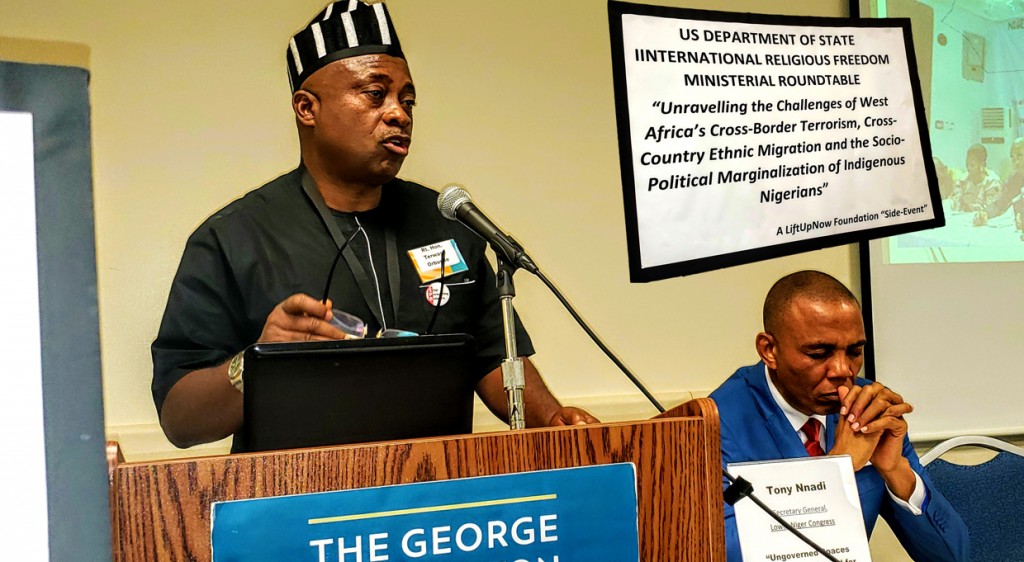 Rt. Hon Terwase Orbunde – Chief of Staff to the Governor of Benue State, Nigeria making a presentation at the IRFR Side Event at the Marvin Center, GW University, Washington DC on July 16, 2019. This special Side Event was hosted by LiftUpNow Foundation.

Lady AnnKio Briggs and Lady Elizabeth Ojutiku used their presentations to further highlight the immense existential challenges faced by the Christian-majority indigenous peoples of the Middle Belt and Southern Nigeria who are chronic victims of the Fulanization and Islamization agenda of the Buhari presidency. Ms. Briggs spotlights the ongoing design to use presidential executive to establish the highly controversial Ruga settlement scheme and the takeover of the shores and banks of all waterways in the country as the de-facto dispossession and enslavement of her people who inhabit the riverine parts of the Niger Delta Region. They both concurred with Mr. Tony Nnadi that restructuring Nigeria’s geopolitical economy away from unitarism toward a loose federal structure is the only means to stop the rising incidents of Fulani herdsmen trespass over indigenous peoples’ ancestral lands with their cattle herds.

Before rounding up, the special side event on Nigeria called on the United States Congress to pass a resolution demanding that the Nigerian Government must restrain the Islamist terror groups, based in the Sharia Territory and elsewhere around the country, must stop all extrajudicial killings going on in the Middle Belt and Southern regions. With this congressional resolution in hand, two things can be accomplished quicker. First is that the Nigerian presidency shall immediately get the message that the US Government is serious about stopping the ongoing genocide and ethnic cleansing of the majority-Christian stakeholders residing in the Middle Belt and Southern Nigeria. Second is that the congressional resolution shall go a long way in adding pressure on President Donald Trump to appoint a Special Envoy for Nigeria to assure that the US stance on the killings of innocent Christians is conveyed directly to the topmost decision-making body in the country in real time.