How Come Most Supporters of the IPOB “MADNESS” Live Abroad, Asks Charles Ogbu?

I made a conscious decision to switch off from everything concerning Nigeria and Ala-Igbo, which explains why I had been posting pictures that should ordinarily be private. Yesterday, I even had to watch the reality TV show, Big Brother Naija, for the first time – all in an attempt to shield myself from the toxicity that is associated with the Nigerian social media space, especially on issues concerning Ala-Igbo and Biafra. It is almost impossible to see Igbo youths argue in an environment of intellectual hygiene these days. So, I just chose to watch in silence to protect my mental health from negative energy.

When the academic future of innocent Igbo children is being jeopardized by a group that ought to be protecting that future, then it becomes an ‘nso ana’ (abomination) for any real Igbo to keep quiet even if saying something might attract death or threat of it from OUR OWN PEOPLE. I was an ad-hoc staff of the National Population Commission during the 2006 census and I saw firsthand what MASSOB foolishness cost Ndigbo during that period.

I’ve said it before and it bears repeating now, For Any Agitation to Succeed, There Must Be a Balance Between PASSION (EMOTION) And REASON. Take away this balance and what you have is a recipe for disaster.

You see, the biggest singular tragedy of Ndigbo is the tragedy of leadership. Our leaders are a walking disappointment. All of them! Let’s be very clear on this.

But the self-determination group that claims to want to LIBERATE us is yet to show even the tiniest proof, be it circumstantial, that its ranks are better than those running Nigeria in terms of RESPECT FOR HUMAN RIGHTS or even with regards to building a decent society. It is not just enough to expect every Igbo to join your Biafra movement just because Nigeria is not working. You must show evidence that you can offer Ndigbo better treatment than they are getting in Nigeria or, at the very least, that you will guarantee their fundamental human rights to life, speech, movement and dignity as humans.

In this regard, our pro-Biafran group has failed woefully. It grieves me to say this, but it grieves me even more that it is not untrue.

We can keep romancing the truth for fear of being attacked, killed or insulted. But if we truly care about the future of Ala-Igbo, now is the time to speak to our respective consciences and be true to ourselves.

How can you claim you are fighting to LIBERATE me, but every time you want me to do something, you don’t bother about my opinion. Do you simply resort to threatening me with death in order to force compliance from me??

Where is the FREEDOM in a supposed FREEDOM FIGHTING GROUP using the threat of violence and ACTUAL VIOLENCE on the same people they claim they are fighting for??? 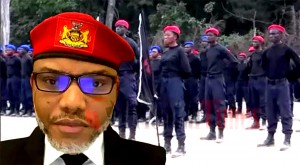 Mazi Kanu’s IPOB launched the Eastern Security Network (ESN) without any authorization or coordination with the government of the Southeast states. ESN is thus regarded as an illegal outfit by the government.

On May 30th, a SOLEMN day we were supposed to remember our people who died in the moral tragedy that was the Biafran war, you threatened your own people with death if they disobeyed your order to stay at home even when you knew they would gladly honor their dead without your threat. And some of the people condemning today’s event boldly supported the May 30th threat. Some even claimed it was a mere threat even when we later saw video evidence of gun-wielding men enforcing the threat.

Today again, you threatened that anyone who comes out “will regret his or her life” (to use your exact words).

Even when the biological younger brother of the same leader for whom you are doing the sit-at-home tried to be reasonable by announcing the suspension of the order for the sake of our kids writing an important paper (mathematics) NECO exam, you issued a counter insisting the sit-at-home must be observed or defaulters will pay heavily.

Now, the whole Southeast is on lockdown, not because they believe in your order but because THEY ARE SCARED of your threat. Today, people, IGBO PEOPLE, have been killed, commercial vehicle burnt, goods destroyed from shops that opened (video evidence are everywhere online) and above all,

OUR CHILDREN’S EDUCATION HAS BEEN TRUNCATED FOR A WHOLE YEAR!!!

Those kids will now have to wait for another year to write NECO again as no one can get admission into any Nigerian University without math which they missed today.

Meanwhile, you did all these TO PRESSURE a man sitting in faraway Abuja (President Muhammadu Buhari) to release another man (Nnamdi Kanu) he’s holding in the same Abuja.

Pray tell, how does shutting down the economy of a region that depends almost entirely on buying and selling advance your agitation? How does it even affect Buhari? Who loses from such action?

HOW DOES JEOPARDIZING THE EDUCATION OF OUR OWN CHILDREN HELP ADVANCE BIAFRA?? Are you now competing with the Taliban and Boko Haram in fighting Western education????????

Why should I believe you care about me when you just wake up to make a decision that affects me NEGATIVELY and still force me to abide by that decision or pay with my life for disobeying?

Why should a group fighting to LIBERATE me be threatening me and making me live in fear????

If your main support base starts seeing you as a PHARAOH who is merely pretending to be MOSES, wetin you gain????

If you cannot help our people, at least don’t make their situation worse, which, sadly, is exactly what you are doing now.

AND HOW COME MOST OF THOSE SUPPORTING AND DEFENDING THIS M.A.D.N.E.S.S LIVE ABROAD AND, AS SUCH, CANNOT BE AFFECTED BY THIS ANTI-IGBO ORDER??????????

For the benefit of some of my readers who recently started following me and may want to drop the usual blackmail line of, ‘Charles, you are only good at criticizing without taking any action’, let me say this in advance because I know such an argument will come in the comment section.

I have played different roles to advance the Biafra agitation. When Nnamdi Kanu was first imprisoned by Buhari against a court order granting him bail, a foremost Igbo Think Tank I belong to, Nzuko Umunna was the first to visit him in Kuje and address a WORLD press conference. When the IPOB leader was released, myself, Dr. Law Mefor – a lecturer and psychologist, Professor Ilochi Okafor (SAN), who is the former vice-chancellor of UNIZIK and two others, at the behest of the same Think Tank embarked on self-funded visits to reconcile the IPOB leader, Kanu and Ohan’eze Ndigbo then President-General, Chief John Nnia Nwodo because we believe the Igbos will make more progress when we understand each other instead of antagonizing ourselves publicly. It was on that visit that I took my first picture with Kanu, which some IPOB members mockingly but ignorantly interpret as me rushing for a photo-up with their leader. During Python Dance in Kanu’s house, I played an insider role. In fact, as many of you would recall, I was the one who published the phone numbers of all Southeast governors in protest over their poor response to that atrocious military exercise. I did this at grave risk and personal cost. I have done other things, some of which would rather remain private for reasons of my own security. In terms of writing, I have used my gift of the pen to advance the Biafra argument in significant ways, not just on social media but in major Nigerian National Dailies with headlines like:

“How To Resolve the Biafran Question” ~~ Guardian newspaper 2016

“Open Letter to Buhari” – SaharaReporters 2017, to mention but a very few.

And this is just for the Biafran struggle. My contribution to the general Igbo wellbeing is in the public domain.

So, before you come here to insult, attack, or threaten me for offering the above criticism, pause and ask yourself, HOW HAVE I PERSONALLY ADVANCED EITHER THE IGBO QUEST FOR JUSTICE AND FAIRNESS OR THE BIAFRA AGITATION??

The answer to the above question should guide you on whether you are qualified to attack fellow Igbo for expressing opinions on issues affecting them.

MAY OUR MOSES NOT BECOME OUR PHARAOHS!!!!