If It Is Okay for Britain to Leave EU, It Is Also Germane for Nigeria to Break Up to Eliminate Inertia

2019 General Elections: There Is Nothing in Nigeria Worth Voting for – Unite & Ask Instead for a Referendum

The UK voted on June 23, 2016 in “Brexit” Referendum to leave the European Union (EU). It is scheduled to depart finally at 11:00 pm UK time on Friday March 29, 2019. But even after quitting the EU, the United Kingdom of Great Britain shall not only continue to be regarded as an important European nation globally, but also the British economy must still find the ways and means to function as part and parcel of the rest of Europe. It is to assure that a future shall exist for UK after Brexit that the Prime Minister, Teresa May, periodically updates the Parliament about what are being done to address the new reality entailed by the impending divorce of Britain from Europe.

The British Prime Minister spares no effort in explaining the rationale behind the Brexit vote to leave the EU to her fellow compatriots. Outcome of the Brexit Referendum was a manifestation that the British majority want the UK Government to be able to control their nation’s money, economy and destiny without hindrance by other constituents which make up the European Union. With this sort of explanation, the Prime Minister would proceed to assure all and sundry that a greater future lies ahead of the British people despite the scheduled severance of intimate connections with continental Europe in the next 12 calendar months. Essence of Ms. May’s message to her people is that implementation of the people’s wish, as expressed via the Brexit Referendum shall indeed be good for the country culturally, economically, politically and diplomatically.

This same UK Government has utilized all avenues available to it to express its strong opposition to any undertaking that would have the potential to culminate in the breakup of Nigeria. With this backdrop, the UK Government is not only opposed to the conduct of any Referendum for Nigeria’s constituents to decide their future, but it is also against any Restructuring that can alter the basic fundamentals of the status quo in post-colonial unitary Nigerian state as imposed by the Fulani-dominated military-commercial complex over the country’s entire geopolitical space. For today’s British government, breakup is okay and rational only when applied to citizens of the United Kingdom, but extremely abhorrent if one has the enslaved peoples of Nigeria in mind. Double standard, one would say?

The UK Government’s double standard is nothing new. The hypocrisy of British official leadership was so glaring during the Nigeria-Biafra Civil War half century ago. While Mr. Harold Wilson deployed his staff at No 10 Downing Street to oversee the operational logistics as well as command-and-control chores in the international military, economic and diplomatic alliance built to subdue Biafra, on the one hand, the same Prime Minister showed up at the UK Parliament to completely deny any formal involvement of the British government in the genocidal war that led to death of millions of children, weak and the old in today’s Lower Niger, on the other. This double-faced policy steeped in lies continued till end of the war in January 1970.

Today, the UK Government is solidly behind the Fulani cabal that has taken Nigeria hostage in past 50 years and may have assured President Buhari of British backing in resisting any change in the status quo in the country, no matter what. Britain still sees Nigeria as a colony that is being administered, albeit on its behalf, by the Fulani feudal aristocracy. All that matter are British interests and little else, if any.

The ultimate blame lies at the feet of Nigeria’s so-called post-colonial leaders from all parts of the country who appear to see nothing wrong in the country that is being operated as a vassal state populated by slaves. In the colonial era, expatriate British administrators were the conduits for effectuating the British will over Nigeria. In post-colonial era, the Fulani feudal aristocracy have been the surrogate slave master representing British interests in the former colony. Shame and blame shall eternally abide with today’s political stooges in Nigeria who have been recruited and enabled to do the bidding of the Fulani ruling cabal and their behind-the-scene master puppeteer at No 10 Downing Street, London, UK.

This YouTube video enjoins enslaved Nigerians to unite, and to demand the freedom to decide their own future through the Referendum just as the British used the Brexit vote to decide their continued membership of the EU. Just as there is hope for good life for the British after Brexit, there shall also be much brighter prospects for all Nigeria’s constituents after a Referendum for Restructuring. The status quo in today’s Nigeria connotes, economic stagnation, insecurity of lives and property, breakdown in law and order, maladministration and overwhelming sense of hopelessness and despair. The priority in people’s mind is survival. The 2019 general elections cycle ought to be better utilized to address the priority concern of the average Nigerian rather than to, once again, watch the Independent National Electoral Commission (INEC) ruse to legitimize the perpetual misrule of Africa’s most populous country.

There could not be a more blatant way to exhibit the Fulani dominance of the Nigerian geopolitical space than the fact that cattle herds owned by the Fulani feudal aristocracy roam freely through the streets of major urban centers around the country. Nigerians are slaves to the Fulani cattle breeders and herders. The citizenry is, therefore, subject to the whims and caprices of the feudalistic, unenlightened and barbaric cattle cabal that claims dominance and supremacy over 180 million inhabitants of Nigeria. 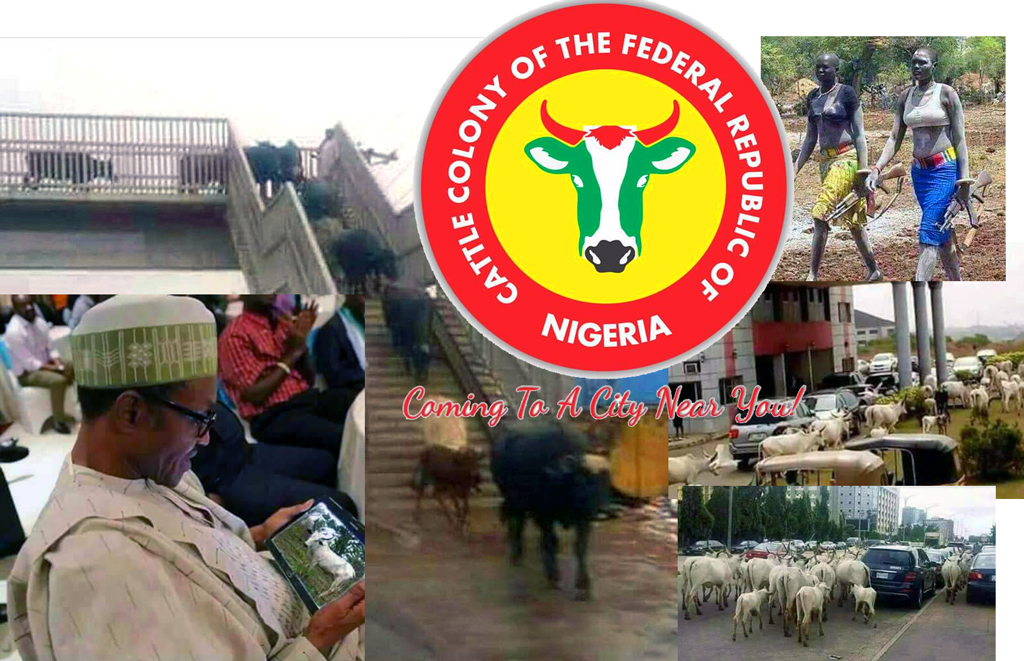 Takeover of large population centers like Lagos metropolis emblematizes the enslavement of the citizenry of Nigeria by the feudal aristocracy that controls the cattle industry in the country domestic market.

The All Progressives Congress (APC) and the former ruling party it replaced in 2015 general elections cycle are clones of each other. Huge lies were trumped up by APC propagandists just for purpose of power grab in 2015. Once the power shift took place, the supposedly toppled PDP adherents massively switched allegiance to the APC without losing even a beat. The much-touted 2019 general elections are shaping up to be a rematch between the incumbent APC and its immediate predecessor, the PDP. Birds of a feather, one would say?

No party and no candidate is worth voting for in the 2019 general elections cycle. The only vote worth the while in 2019 is the vote for Referendum to determine Nigeria’s future. Geopolitical zones in the Southeast, Southwest, Southsouth and the Middle Belt have already explicitly repudiated the status quo as well as the imposed 1999 Constitution that has legitimized it for the past two decades. The master-slave legal framework imposed on Nigerians as the 1999 Constitution has failed woefully thereby making it a revel in tomfoolery for the multitude of conscientious citizens to bother themselves TODAY with a sham vote in 2019 so as to legitimize the illegal contraption designed to imprison and retard the development and progress of inhabitants of the acclaimed leader of Black Africa.