If Northern Elders Are Sincere, They Should Fix the Middle Belt, Which They Have Destroyed – Prof. Yusufu Turaki

Northern Rulers Have Been Raping Our People for 200 Years: North Must Apologize for Atrocities Committed Against Middle Belt – Prof Yusuf Turaki

One of the conveners of the Nigerian Indigenous Nationalities Alliance for Self-Determinations (NINAS), Prof Yusuf Turaki, has said that the North must apologize to the Middle Belt for atrocities committed against the region.

The Middle Belt leader, in an interview with VINCENT KALU, analyzed the 12-paragraph communiqué released recently by the Northern Peoples Summit comprising Northern Elders Forum (NEF), Arewa Consultative Forum (ACF) and 15 other Northern groups on April 9, describing it as hypocritical. He called on Nigerians to save the Middle Belt from annihilation by the Far North while insisting that the North has been ruined by its rulers.

Q.     The Northern Peoples Summit, after its meeting last week, came up with a 12-paragraph communiqué, part of which states that minorities and majorities among Northerners should have no place in the North. It also says there should be no discrimination of any Northerner on the basis of place, faith, or ethnic group. As a Middle Belt leader, how would you respond to this?

A.     The entire communiqué of some Northern elders does not address any of the views or the needs of peoples of the Middle Belt. Let me use the historical facts to answer your question. Firstly, in the pre-Islamic period before the arrival of Islam, the African ancestors created the following primordial social factors: ethnography (ethnicity, identity and history); geography (land and territory); religion and culture. What we need to study is how Muslims, colonial masters, missionaries, politicians and soldiers transformed those primordial social factors, usually to the detriment of the African indigenous peoples.

Historically, Northern Nigeria was broadly divided into two major regions: the Far North that comprised Hausaland and Kanuriland, which became predominantly Muslim; and the Southern part of the North, which was the Middle Belt, a mixture of different ethnic nationalities that have become a mixed society of Traditionalists, Muslims and Christians.

What connected the two broad-based regions was mainly trading. The Hausa and Kanuri long distant traders called Fatake and the pastoralists Fulani. The pre-Islamic era was relatively peaceful, as what connected them was trade and cattle rearing.

The Islamic Era: After the Jihads of Usman Dan Fodio, Abdullahi and Mohammed Bello, the son of Usman Dan Fodio, the relationship between the Far North and the Middle Belt changed and was characterized by three major activities: slave raiding, slave trade and slavery. The Hausa, Fulani and Kanuri jihadists raided and hunted the Middle Belt areas for slaves for Arab and European slave traders, the Trans-Sahara Trade Route for Arabs and the Trans-Atlantic Route for Europeans. During this historical period, slave raiding, the slave trade and slavery overshadowed the earlier peaceful era of Fatauci (trading activity).

The Muslim Fulani, Hausa and Kanem Bornu in the Far North supply Arab slave raiders plundering the African hinterland in search of captives to sell in the Middle East and Europe. Arabs pioneered the African slave trade long before the trans-Atlantic slave trade to the Americas.

The British Colonial Era: First January 1900 at Lokoja, the British created the Northern Protectorate of Nigeria. Between 1900 and 1903, the British conquered the Sokoto Caliphate and the Sultanate of Kanem Bornu. But it took a long while before they could establish control over the Middle Belt areas. The British created an Indirect Rule System and subordinated the non-Muslim groups under the Anglo-Muslim Rule. The British institutionalized the Islamic status and the British racial views into the Northern political structure, thus making the Middle Belt peoples second class citizens in the hierarchical structure of Northern Nigeria.

Based upon this historical background, this statement by the Northern Elders: “perception and practice of creating minorities and majorities among Northerners should have no place in the North, nor is discrimination on the basis of place, faith or ethnic group of any Northerner.” Both history and the current plight of the peoples of the Middle Belt make a mockery of this statement as hypocritical. This view and posture still show that the Hausa, Fulani and the Kanuri political elites and rulers who have historically demonstrated disdain and repugnance against the peoples of the Middle Belt would want business as usual.

Today, Boko Haram has its historical roots in the Sultanate of Kanem Bornu. The places where the jihadists of Kanem Bornu raided about 200 years ago are still the same historic-geographical areas that Boko Haram is raiding now. Similarly, there is a very strong historical and geographical correlation between the Sokoto Caliphate jihadists and today’s Fulani herdsmen, the bandits and the kidnappers. Where Caliphate jihadists did slave-raiding about 200 years ago are the same areas of the terrorists’ activities of the Fulani herdsmen, bandits and kidnappers. Kidnapping, rape and sex slaves were the same activities of jihadism during the Islamic era in the Middle Belt. What is going on today in the Middle Belt is a continuous repeat of the Caliphate’s era.

No nation built upon the structures of injustice can withstand the test of time. We cannot subject the peoples of the Middle Belt to the state of slavery and servitude for the comforts of Northern elites and rulers. Nigerians must rise up and denounce this inhumanity and degradation of the peoples and lands of the Middle Belt. For long, these people have been saying that “There is no Middle Belt.” Only people who ignore history and glaring anthropological, social, religious, cultural and geographical differences between the Far North and the Middle Belt, will subscribe to the falsity of Northism.

The communiqué says that the North will not be stampeded or blackmailed into taking major decisions around rotating the presidency in 2023. Does it suggest that the North is still bent on having a shot at the presidency? Where then do equity, justice and fair play lie? Is this not the kind of position that is fueling separatist agitations?

Q.     The Northern group says it supports restructuring, but the body language of the president says otherwise. What is your take on this?

A.      Mr. President could take such a stand knowing what stuff Nigerians are made of. Restructuring is most needed in the North than in any other region in Nigeria. The political question of the Middle Belt, the heavy bombardments of the Middle Belt by Boko Haram, Fulani herdsmen, bandits, kidnappers and terrorists call for a rescue mission of the region from total annihilation. Freeing all the ethnic nationalities from the hands of Hausa, Fulani and Kanuri elites and rulers would be the best and most needed restructuring in Nigeria. In this modern age of freedom of conscience, religion, etc., you dare not submit yourself in a willing servitude and human craftiness. If truly, the Far Northern elites and rulers truly love the peoples of the Middle Belt, would they have allowed the Kaduna and Gombe states to bastardize the traditional institutions in Southern Kaduna and Tangale land by imposing Islamic Hausa traditional customs upon people who are different and unique from the Hausa and Fulani traditional and religious customs? Nigeria is back to the Jahiliyya period and Jihadism. Good, patriotic and lovers of Nigeria must stand up and denounce these retrogressive anarchists and nihilists from taking over Nigeria. We are already in a sinking boat; we need urgent redemption. Who will save us from this evil angst and seduction? 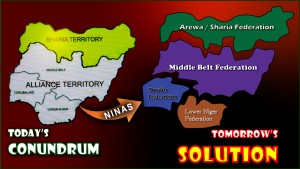 A.      I am sure you know why they are silent about the herdsmen being the killer squad in the South. Both the South and the Middle Belt know and understand such provocations. If it is a known fact that the Federal Government is incapable of securing lives, what should the people themselves do? Self-defense. Self-defense is a natural law. No foolish government would send you to prison for defending your life against a terrorist or an attacker.

Q.      Part of paragraph five of the group’s communiqué says, “…For Nigeria to survive, all parts of the country must equally commit to supporting its continuation as one entity, without equivocation or subterfuge. How can this be achieved when some people are accusing the core North of turning others to horses, while they are the riders?

A.      We want Nigeria to survive. We want peace. We want unity. We want Nigeria to be a country where human values of equality, justice, freedom and rights reign supreme. If this is what the Northern Elders are advocating, this is a welcome move. But physician, heal yourself first. The North is in shambles. The political class and rulers have run the North into ruins. There is too much bloodshed in the North, too much anarchy, chaos and terrorism. These are the social evils that have weakened the political stand of the Northern political class. The North is in dire need of peace and stability, not empty political rhetoric. They should fix education, healthcare and services, social amenities and restore peace and security. Local governments are glorified consulting empty resting houses.

If the Northern elders are sincere and not being hypocritical, they should hide their faces in shame and fix the Middle Belt, which they have destroyed. They have the capacity and the political will to stop the menace of Boko Haram, Fulani herdsmen, bandits, kidnappers and terrorists. They should also stop imposing Islamic and Hausa culture upon the traditional and religious culture of the peoples of the Middle Belt. Gombe State has imposed an Islamic culture upon the traditions of the Tangale. Kaduna State is planning a swoop of Islamic and Hausa culture upon the entire ethnic nationalities of Southern Kaduna. What the state is planning to do is a total disregard and disdain of the traditions and culture of the peoples. Might is not always right, but it is always an expression of impunity. These are the issues of the Middle Belt that Northern Elders must pursue and stop their politicians and rulers from harassing and intimidating the peoples of the Middle Belt. The Far Northerners are currently waging various wars against the peoples of the Middle Belt. These war fronts are Boko Haram, Fulani Herdsmen, bandits, kidnappers, and both federal and states’ institutions. The state is the most lethal weapon against the peoples of the Middle Belt. The current Jahiliyya State policies are fast eroding structures and values of universal societies and are seriously introducing primitive, divisive and conflict generating structures and values with the help of the state Assemblies and the National Assembly.

Will Nigeria Survive? Yes, it can if our politicians would stop being hypocritical, dubious, deceptive, self-centered, greedy and lustful. Patriotism must be above the sub-national and divisive values of ethnocentrism, primordialism, regional, religious and cultural bigotry.

Culled from The Sun News