Igbo Lagosians Should Implement an Indigenized “Marshall Plan” for Homeland in the East – Prof. Madubuike

The “Igbo Lagosians” & the Rest of Us – A Rejoinder

This piece was written by Prof. Madubuike in reaction to an earlier publication on this website by the same title which can be accessed by clicking on https://goo.gl/3moCvZ.

If the “Igbo Lagosians” allow themselves to be used as a pawn in the political chessboard of Nigeria, as is being suggested in some discussion fora, it is sad, and indeed a great pity. That they are not the first to so act, that they do not realize the import of their action on our collective future and that they are victims of a trap to further debase Ndiigbo makes the whole charge a tragedy. But not all the Igbo in Lagos deserve castigation. There are many noble-minded Igbo elites in Lagos, who quietly are working for the interest of Ndiigbo. They are far from the madding crowd.

Let it be acknowledged that it is in the nature of the Igbo to migrate in search of greener pastures to other parts of Igboland and outside Igboland; it is known as njepu or nkpata aku. But it is also true that it was part of the Igbo work ethics and expectation that he should bring home the fruit of his labor. He usually repatriates his net acquisition home. That is the essence of AKU RUE ULO (wealth repatriation).

After this ritual, he would set out again for more material conquests and still come home timeously with the harvest. Some, because of exigencies of his work, might marry from their environment and raise families but would still come home in the fullness of time. They send home their children born outside Igboland, from time to time, to acquaint them with the culture and tradition of our people.

Some Diaspora Igbo seem to have forgotten this tradition. They do not only migrate and make money, but also fail to return home. They are the exceptions that confirm the rule. Many of our domestic and foreign Diaspora Igbo help to meet their families’ obligations through massive repatriation of their wealth to Igboland. My generation did that while we lived in America. Others are still doing so. But what is needed far outweighs what is brought back? Igboland has been so systematically downgraded economically and by extension politically by the powers that be that it will take more than the occasional repatriation of family funds to our kith and kin to make ends meet to transform Igboland into the dreamland of our aspiration. We need an indigenized “Marshall Plan” of our own, a synthesis of creative thinking cum purposeful action. 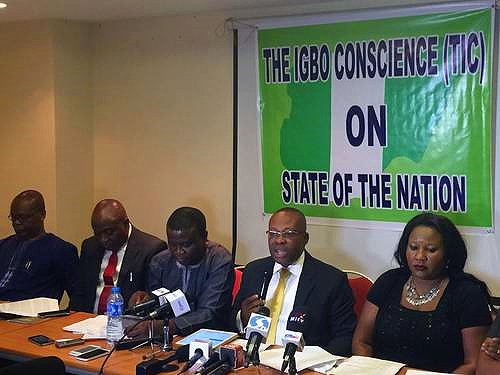 The leadership of the newly emergent Igbo Conscience group while addressing a press conference called in Lagos to repudiate IPOB & supporters of pro-Biafra agitators.

What is unconscionable, however, is when local color, intervenes and the Diaspora Igbo begin to dance the dance of the native and forgets their origin. Or when they try to replicate their tradition and custom in a foreign land, provoking the angst of the traditional landowners. The perception is that he has taken more than the owner can ignore. Take for instance the replication, in their hundreds, of a fanciful structure of Ezeship in foreign locales. It is not only a failed mimesis; it is also a source of irritation to the landlords and traditional institutions of the hosts. It is also an embarrassment to Ndiigbo.

The good tiding is that the Igbo is not easily assimilable. After the shock waves of every pogrom, they remain put in their places of abode or relocate to a friendlier place until they are attacked again. The idea of a permanent relocation to the Igbo hearth sounds remote. That is why some, especially members of the elite class, seem tentative or undecided about Biafra.

I believe that with time, the idea of a greater Igbo renaissance will catch on and blossom. Events will ensure a massive Igbo emigration back home. Watch out what will happen in the next twenty years if we continue with the present advocacy of “Think Home, Think Igbo Land”. East or West, the idiom goes, home is best. The Igbo will soon turn a new corner in their existential journey in Nigeria. It will be far from a cakewalk, but it will happen. Sacrifices will be made. Compromises reached.

In 1917, Palestine was part of the Othman Empire, harboring a few returnee Jews. Some wealthy Diaspora Jews, like Baron Edward de Rothschild, who earlier was skeptical about the Zionist project, sponsored the emigration to Israel. It was not at all an easy assignment, functioning as it did, in fits and starts amid Arab opposition. By 1947, the dreamland of Dr. Herzl, the founder of the World Zionist Organization, in 1897, became a reality.

There are many Jews still in other lands and climes. They all are proud to have a homeland – to claim Israel as their own. Anti-Semitism has not quite disappeared as a result of a homeland for the Jews. A renascent Igbo nation will not stop Igbophobia and Igbo hate. The presidency of Barack Obama has not reduced racism against the Blacks in America, neither did “uncle tomming” disappear.

Lagosian Igbo may remain an exotic elite in the wilderness of an inchoate metropolitan culture in a state of mutation. They will never be integrated into mainstream Yoruba culture, its atavistic tradition or shared values. Whether by their present attitude the Igbo will or not bring to Lagos a new configuration rooted in being “politically correct”, remains to be seen. But my take is that the Igbo in Lagos and in many other hostile parts of Nigeria will continue to feel the anguish and frustration of a people who are tolerated but not accepted. Their hosts will continue to perceive Igbo brashness and competitiveness as a burden.

In 1951, Dr. the Hon. Nnamdi Azikiwe won election from Lagos to the Western Nigeria House of Assembly. Because his party, the National Council of Nigeria and the Cameroun (NCNC) won the election, he was called to form the government and to become the leader of government – that is the Premier at Ibadan, the capital of Yoruba land. Overnight, the Yoruba ganged up against him by making sure that the NCNC Yoruba members joined the Action Group (AG) led by their own son, Chief Obafemi Awolowo. That was the beginning of the now famous carpet crossing, an oddity in parliamentary democracy celebrated in Nigeria without any remorse or regret. Awolowo of the Action Group became the Premier of Western Nigeria. Zik fled to the East.

In 1962, ten years later, Professor Eni Njoku was appointed the first Vice-Chancellor of the University of Lagos and was eligible for a reappointment after the expiration of his three-year tenure.  Against all expectations, his reappointed was truncated because of opposition mounted by the children of Oduduwa in favor of their own son, Professor Saburi O. Biobaku. All entreaties by the student body and the academic community to make the then Minister of Education, Chief Richard Akinjide to reverse the decision fell on deaf ears. Tribal politics had permeated the portals of the academic tower and it had never been the same since then. In the midst of the crises and confusion that engulfed the University, a radical student, Kayode Adams, stabbed Professor Biobaku at the back while he was addressing the academic community. The student felt that Professor Eni Njoku was cheated and unfairly treated. It was that bad. 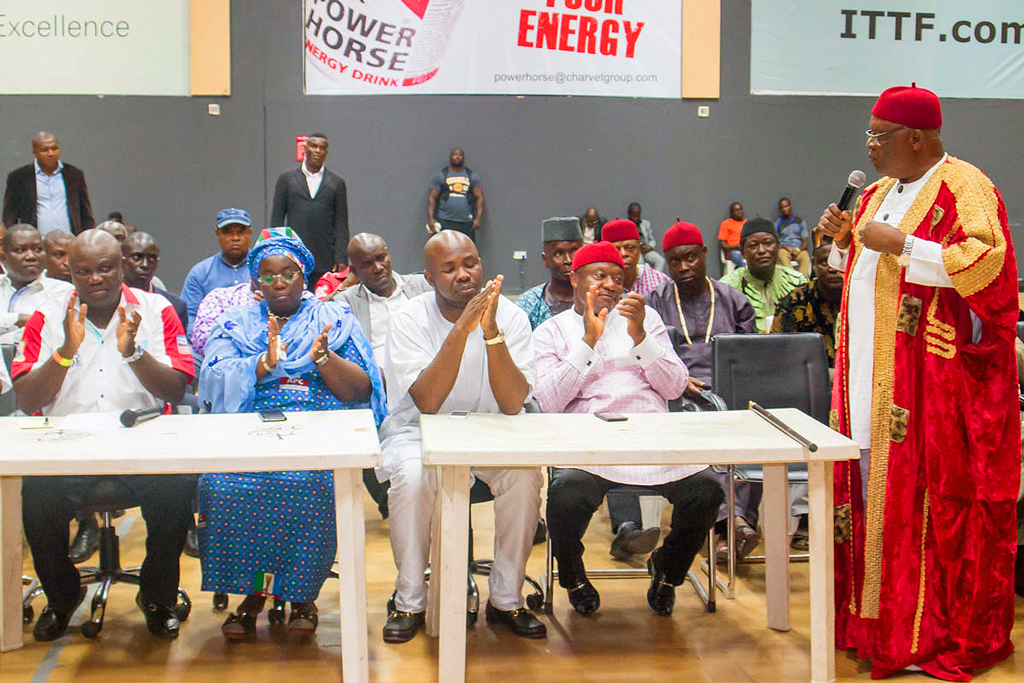 The Zik and the Njoku episodes had consequences that have affected the political and academic landscapes of the country negatively. Nnamdi Azikiwe was compelled to return to Eastern Nigeria to become the Premier. It was not a smooth sail. A series of political events were unchained, leading to the decision to have a new election in Eastern Nigeria and the ouster of the Eyo Ita-led administration in 1953. The refusal of many of the Ministers of the time to resign their positions and the resultant administrative logjam made a new election inevitable. The rancor and animosity fueled by that event are still festering.

Following the exit of Professor Eni Njoku from the University of Lagos, several lecturers resigned from the university, not only in solidarity but out of fear of persecution. The other fallout is that all federal universities and institutions have become the victim of the obnoxious quota system, in which merit has been relegated to the background. The loss of the merit system is a loss to the Igbo. There are today few states where the Vice Chancellors of the Universities come from outside the states where the universities are located. I did not allow that to happen during my tenure as Minister of Education.

We may attribute all these incongruities to ethnic pride badly applied. But it hurts. Exclusion has become the hallmark of Nigerian politics. What the Yoruba did yesterday, they can still do today. If they were jealous of the Igbo political and academic successes of yesteryears, they would, I bet, also reenact a similar drama if the Igbo were to rise to the commanding heights of the country in Yorubaland. They would not think twice about it. They will always see Igbo ascendancy as the reason for their own failure, even when they are doing better than the Igbo. 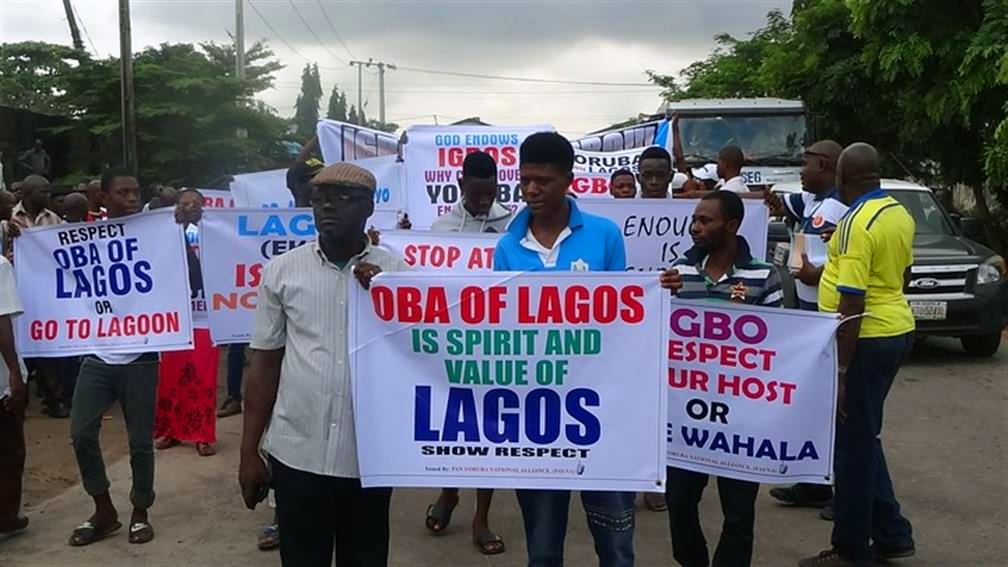 Local youths display their readiness to enforce threat issued by Oba of Lagos against Igbo Lagosians who would dare to oppose the favorite candidate endorsed by the regent.

We will then begin to appreciate the full weight of the terror and cruelty of power when threats of royal anger and economic irredentism are translated into reality through the instrumentality of the crude and raw politics that is driven by ethnocentrism. Then the wayward Igbo-Lagos politicians will understand the meaning of being a number, a token and an outsider in a country he claims to be his own.

But we can prevent this ugly prediction from being a reality by thinking home, by thinking Igbo and by being sensitive to the sensibilities of others. This does not mean quisling or compromising your ethnic pride. One of my ancestors told me that a visitor must not allow himself to be reminded by the host that it is time to go home. Our past sufferings and present afflictions should remind us that we should always be on our guard.