Comparatively speaking, unity of purpose is flowing among UmuIgbo like a river. Indeed, we should be pleased.  Like a river, it is not going to be pure and crystal-clear water. It should be expected to carry its debris and flotsam and jetsam.  Considering where we have come in the past fifty years, I am pleased with where we are.

Time solves every problem and defeats everything. The generation that feared ndi Fulani have largely passed on. But there are still some influential Igbo in their late seventies and early eighties who fly under the bed at the contemplation of any push and shove between the Igbo and the Fulani.  Understandably, they are more circumspect in their manner of approach.

Tony Nnadi, born circa 1966, did not see the war. What he saw was the enslavement that followed. He is eager to end it one way or another. And so are many post-1970 youths. Whatever it will take, they feel spiritually up to it. Igbo born after the war will decide the outcome of the struggles ahead. Let the older generation respect that and respectfully and happily play a supporting role. This is a new generation of Igbo that are determined not to pass this struggle to their own kids. 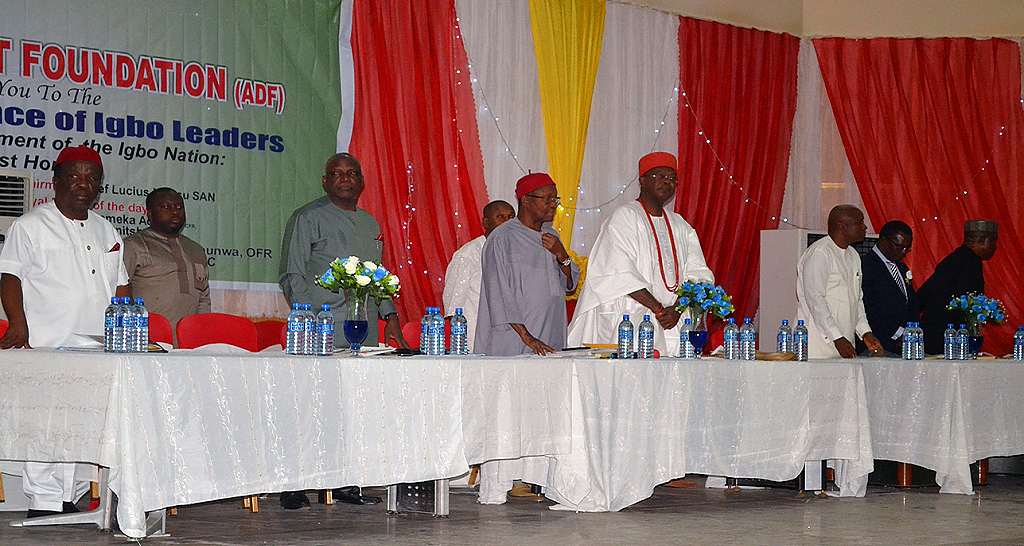 Alaigbo Development Foundation (ADF), an elite pan-Igbo activist group, organizes a conference in Awka to deliberate over business options for the contemporary Igbo.

The pre-1960 generation know that advantage in war is not to the berserk nor is a victory in a race to the swift of foot. It takes more than passion. It takes preparation and propitious timing. They remember how we went to Ore with bows and machetes and how disastrous that was. They remember how the Western nations led by Britain conspired to wipe us out and they are wondering if by confronting the Fulani now, we would be confronting the West again and whether we are ready for it.  Above all, they remember our fellow Nigerians in the Southsouth, Southwest and Middle Belt and the ignoble role they played in fighting against Ndiigbo and they wonder where they stand this time around. They are scared about the outcome of precipitous action such as Tony Nnadi appears to be urging on us.

Then, there are the process ideologues such as me who is neither afraid of peace nor of war, but who believes that ignoring history is always a mistake. While Tony would wish that we all gather in a big arena right now and proclaim an independent Republic of Lower Niger and deal with the consequences, it most certainly would be an existential error.  There are constraints that must be met before we come to the Nnadi bridge but anyone doubting that we will get to the Nnadi bridge is just being disingenuous. Nigeria has failed totally in all domains and it is only a matter of time before independent nations spring out from its carcass.

Here are the constraints.

So, the bottom line is that despite all the mind-gnawing provocations from the Caliphate and its minions, we must have the discipline not to pull the trigger before circumstances call for it. We will get to that crowning point of self-determination by as much as what the Caliphate does or fails to do and by what we do.  Let’s not do theirs and ours. The world is watching. Their barbarity and cruelty stink to the highest heavens. They are making a moral case for why their way of life is incompatible with our ways. That fault line between the secular and non-secular Nigeria is widening every day and it will cleave into two independent nations – one secular, one non-secular. But time and events will shape its edges. We have time.

All in all, I am pleased with where are. 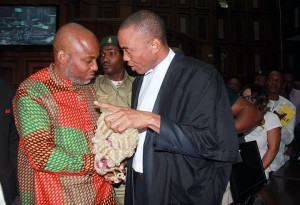 Nnamdi Kanu’s recent tour of America has established him as a bona fide Igbo leader. Ignoring him is a mistake.

Tony Nnadi’s diplomatic forays into the United States is much needed.  We need more efforts in the diplomatic arena.

Ohanaeze’s inter-ethnic alliances is yielding fruit and will continue to yield fruits in its season.  We can’t get too far away from the rest of Southern Nigeria and we are not straying too far away strategically from them. The West, led by the O’oni of Ife, has reached out to us by reminding us of our deep cultural and anthropological ties with the Yoruba. Let’s continue to cultivate and deepen those ties.

ADF’s militant Igbo advocacy is music to the ears of Ndiigbo. “Owu otu anyi na eme”. Anytime one reads a release from ADF, it sounds totally Igbotic – direct, poignant, courageous, impudent and impolitic. That is us and we can’t apologize for it.

We need everyone to get into the act of self-determination.

The Igbo clergy have a role to play. If they understood their role, by now, no Igbo Christian ceremony would be celebrated with nama.

Igbo women have a role to play. If they understood their role, this year’s August meeting should end with one resolve – no nama in the cooking pot of any Igbo woman

Igbo traditional rulers have a role to play. If they understood their role, by now, no community in Alaigbo would allow the use of nama for any cultural ceremony.

Igbo youths have a role to play.  Without being prompted, they should all go underground and teach themselves how to operate assault weapons and be ready in case of invasion.

Igbo elite and Igbo businesses have a role to play. No one win’s wars by prayers alone. We need the money and we need logistics. Warriors eat and drink. The funding rests on us.

Igbo Governors are sadly incompetent in the fight for self-determination. Many of them are silently rugarizing Igbo land and supporting Python Dances or whatever our oppressors deign to use against us. Igbo kids buried in shallow graves in their states have not even been accorded the dignity of a decent burial. History will judge many of them as ndi efulefu.

We need to focus inwards as much as we need to keep a wary eye on our oppressors.  All those who have roles to play need to be approached and apprised of their roles. That is where ADF comes in and I suggest that ADF makes that a focal point of their campaign for Igbo self-determination and leave other actors in the field of play to do their thing.

Every responsible Igbo adult should ask themselves – what have I contributed to the Igbo cause today?  As I said elsewhere, anyone who has not found a way to pitch in as little as one hundred naira a day, the equivalent of one bottle of water, into Igbo cause is an irresponsible person. We need the money to support our front line crew. They need to travel and meet their existential needs and we need to build up reserves for the days ahead. Anyone who cannot back their ideas with as little as one bottle of water a day is just an efulefu.