In Restructured Nigeria, Every Component Must Adjust to Survive With or Without Oil

Biafra: Six Reasons Why the North Is Against Restructuring

Every region in Nigeria today is calling for geopolitical restructuring except the North. There are reasons why the North is against restructuring of this country. I will list them below.

When Nigeria is restructured, states will no longer look up to federal for survival, but the reverse shall be the case. The resources spent to maintain the current Senate, House of Representatives at the federal level will be channeled to infrastructure development in states. The center will not be as powerful as it is today, because they have little interference over states. The federal and state governments shall operate in parallel lines and not the current hierarchy where federal is head and shoulders above state. So even if the North is majority at the center, their decisions have little or no impact on states and regions.

Today, Katsina state has more recruits in DSS than the entire Southeast states put together. Most of the security agencies in Nigeria are headed by Northerners and none from the Southeast. We see how swift the DSS is to arrest Southerners over alleged inciting statements. But a group in the North has asked supposed fellow Nigerian citizens to leave the 19 Northern states in 3 months, yet no single arrest. We see how Fulani herdsmen move about freely and kill with no action from the security agencies. In a restructured Nigeria, states and regions will have their own security outfits, which will be supervised by the federal agencies to ensure that they operate within the laws of Nigeria and their respective states. So, if you have more police from the North, they will secure the jurisdictions and the North will generate funds to pay them, while the South does the same.

The Northern elite, intentionally ensure that they have the highest rate of uneducated youths, to brainwash and unleash them on other Nigerians for political gain. In current Nigerian geopolitical structure, this works to the North’s advantage. They can use their uneducated youths to attack other Nigerians and claim ignorant, just like they did after Buhari lost the elections before 2015. Since the youths are the future, if emergent jurisdictions of the North fail to educate their youths, they can quickly get the picture of what future of the North will look like. 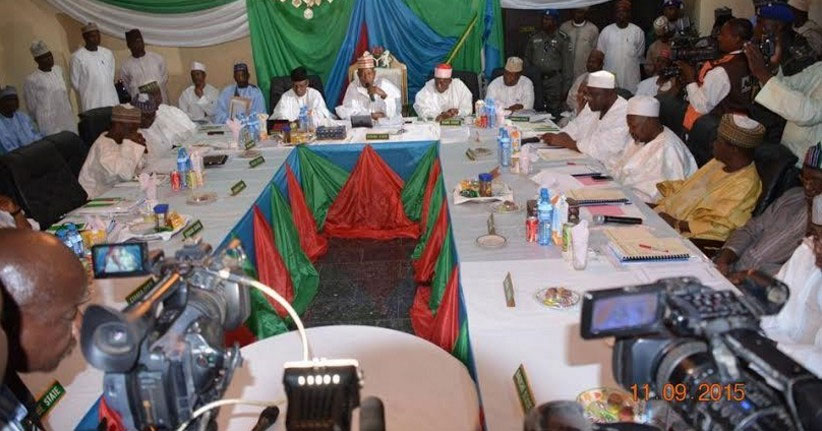 Public meeting by a group of Northern oligarchs in session. Bureaucratic indulgence is popular pastime of governance at all levels since outset of unitary Nigeria in 1966.

Since there is no more free oil money after restructuring, the elite class will have to depend on the local populace who will till the land to farm or extract mineral resources for everyone’s survival. In a restructured Nigeria, every region or zone will use what they have to go after what they want.

The North is predominantly Muslim. Though some claim that the religion is peaceful, it’s obviously quite easy to radicalize their youths through radical Islam to become destructive. It may not a big problem to the North today that their youths can bomb and kill in the name of religion since, at the end of the day, funds generated from the peaceful South is used to rebuild the Northern losses. In fact, big government contractors from the North will even make decent money from the rebuilding process.

But in a restructured Nigeria, if they allow their youths to bomb and destroy their region, they will have to generate the funds from within to rebuild their own region. While other regions are developing and working with each other, theirs could be in flames ignited by religious extremists who will likely not associate with other non-Islamic entities due to religious differences.

These are some of the main reasons why the North is against restructuring. They have historically relied on the politics of fudged numbers to get by. Since one can marry many wives and have as many children, its presumed they have the numbers with which to dominate. With this politics of numbers in vogue in current unitary governance model, they had deployed their concocted majority to control the resources of the South.

Do you know how much it has cost and is costing Nigeria to fight terrorism in the North? If these funds where channeled into infrastructure and small manufacturing enterprises, we would have had more employed youths in Nigeria today.

How long shall we continue the slave-master relationship in a supposed democratic country? When they like, they chant One Nigeria; when they like, they can call other Nigerians guests in their own country because they happen to reside in the Northern states of today.

The Afenifere and Ohaneze and other sociopolitical groups in Nigeria are crying for restructuring but the North has refused to even listen. How long can we continue this way?

Goodluck Jonathan saw this slave master-relationship and called for a National Conference in 2014. After the conference submitted its report, the Northern President Buhari has taken over and discarded the confab’s recommendations and insisted on maintaining the status quo.

If the North truly feels that they have the numbers, let them use it for their development and not for the oppression of other regions.

The entire Southern Nigeria and the Middle Belt that believe in restructuring MUST ensure that no general elections are conducted in their region in 2019. Let’s see how the North will produce the president and continue the slave-master relationship. Nigeria once existed without oil. So, every region can survive with or without oil today.