Indifference and Silence of the Elite Class Allow Machinations of the Political Class to Mortgage the Future of Nigerian Youths – Rev, Fr. Nwosuh

We Are the Real Miscreants, Hoodlums, Touts and Criminals.

Yesterday, we witnessed in many cities and towns in Nigeria unprecedented incidences of looting, burning, killing and destruction in many cities and towns in Nigeria, particularly in Lagos. The peaceful protests by youths, who are still holding on to the last thread of hope and faith in a country that has repeatedly failed them, seem to have been hijacked by their counterparts who have completely lost faith and hope in a system that has no place for them. Without in any way, whatsoever, justifying the actions of these “street urchins”, “hoodlums”, “touts”, “miscreants”, “criminals”, call them whatever you wish, we should first stop and ask ourselves, who gave birth to them? Who are their parents? By parents, I am not, of course, referring to their biological parents.

These “hoodlums” were conceived, birthed, and nurtured by us. They are the fruits of the adulterous intercourse of an utterly corrupt, greedy, narcissistic and kleptomaniac political class and an equally self-centered elite class who are ensconced in their feathered nest. We, the clergymen, also belong to this class along with the wealthy businessmen and women who are uninvolved in politics and the so-called educated elites who enjoy their refined life unperturbed by the turmoil around them. Let us say that the political class is the highly virile father that donates the sperm. The elite class, in their complete self- absorption with their comfort, is the fecund mother that supplies the eggs that, when fertilized in that unholy intercourse, sires these “urchins”, “hoodlums”, “touts”, etc. that have taken over our streets, burning and looting.

Would any of our children be part of these arsonists? Certainly not! Because they are usefully engaged in one meaningful thing or the other. But these thousands of youths who have no hope and no future are ready to have some “fun” when any slightest opportunity presents itself. And of course, the political class is always ready to provide the needed occasions to keep these “hoodlums” busy even for a brief moment. Did we not witness how Government security agents were using official government vehicles to convey these hapless touts to harass and kill peaceful protestants? Would you blame these “miscreants” who, seeing the public endorsement of violence by the highest level of government, decide to take the initiative of their own in looting and destroying public and private properties?

Would these young boys and girls whom we label as “hoodlums” been out there on the streets burning down public properties built with taxes from the citizens if they were given quality education and provided with viable sources of earning a decent living? Certainly not! How will they understand that the public properties that they are destroying were built from public funds and taxes when they do not pay taxes or contribute a dime to the public fund? How can they see public property as their own property when they do not even count themselves, nor are they counted as members of the public?

Besides the political class, who have done incalculable damage to this country, the next culprit in rank are the so-called educated elites. But what actually have we done? We have actually done nothing! But we, too, have contributed to the great destruction by our total indifference and silence. We are too busy with our lives that we do not notice the destruction being wrecked by the political class. And even when we notice, we cannot be bothered. When the young ones who, though driven to the point of desperation, but had not yet succumbed to the alluring embrace of crime and violence, came out to protest, how many of the elites spoke up in their defense? Most were silent and unconcerned. Now that their counterparts who have nothing to lose, having given up on themselves and the society have decided to express their anger in their own language, everyone is aghast.

We are all aghast that the children we all sired have gone mad, looting and burning whatever catches their fancy. The sad and dangerous thing is that when these “miscreants” whom we begot and nourished decide to go berserk, they do not make distinctions. They destroy both the good and the wicked. Why won’t they when they were denied the kind of sound education that will enable them to make proper distinctions and judgments? There is the saying among the Igbo that a snake cannot but give birth to what is long. In other words, a snake must sire a snake. Those young ones out there looting, burning, and killing were given birth by us. The political class and the elite class are the real hoodlums, miscreants, touts, criminals, street urchins, etc. that have given birth to what looks like them. 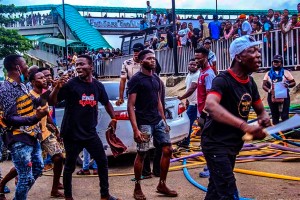 Millions of Nigerian youths lack gainful employment after educational career due to a tottering economy and widespread corruption. The youths finally have a unifying cause to rally their effort to demand relief from the government.

This should not be misconstrued as an endorsement of violence. Far from it. It is only an invitation to self-introspection. It is a warning that if we all fail to ensure that Nigeria is completely overhauled so that no one is forced to choose a life of vagrancy or crime, we will risk being consumed by the very monsters we have given birth to. Our youths came out in peaceful protest to demand change, but most of us sat back in our cozy zones, believing it is all about the youths.

There were even voices calling on the youths to end the protests, having made their voices heard. We were in a hurry to get back to our businesses. We did not understand that it is a struggle that we, too, should be part of. The government, in its tunnel vision, decided to call out the miscreants. But soon they proved that they are like wildfire; easy, to start difficult to quench. A wildfire does not discriminate. It burns everything around.

We may still be lucky to avert a worse disaster. We must realize that we all cannot simply go back and resume our normal lives. The youths of Nigeria have set the agenda and tone for complete reform. It is up to the political and elite class to continue that discussion and bring it to a successful conclusion.

Failing to do so, the next eruption of protests will not be this peaceful at all. It will come like a tornado that will sweep everything that stands on its way, military armored tanks inclusive. The choice is ours to make.