2017 Iri Ji Ndiigbo in Melbourne, Australia Was a Blast!

The Igbo Diaspora spans all the world’s continents except Antarctica. But not too far away from this frozen continent at bottom of the earth is Australia. Southern Australia shares same Southern Ocean with northern shores of Antarctica. Not too many destinations are as far away from Alaigbo as Melbourne, the premier commercial seaport and business hub of Victoria, Australia. But Ndiigbo have found this bustling metropolis to be home away from home. The Igbo residing in the Australian Diaspora gather in Melbourne annually to celebrate one of the most significant festivals of the Igbo calendar, the Iri Ji Festival (a. k. a. New Yam Festival).

In Igbo culture, yam is the king of crops. Yam is a tuber which grows in the tropics. The Igbo regard the yam as staple and therefore, cultivate the crop intensively. Planting is done annually with arrival of the rainy season. After months of weeding, tending and nurturing, new yam tubers are usually ready for harvesting in late rainy season. Yam harvest is the time of bountiful supply of food in the indigenous Igbo society of Southeast Nigeria. Iri Ji (yam-eating) festival is as ancient as the Igbo culture itself. In Alaigbo, which is in the Northern Hemisphere, New Yam festival is celebrated in the month of August which corresponds to the peak harvest season for yam tubers. As is aptly captured in this YouTube video, Iri Ji Festival is a sort of Thanksgiving in the authentic Igbo culture.

Like in other agro-based indigenous cultures worldwide, bountiful harvest of the staple crops portends good times and indicative of the many blessings from Chukwu (Supreme Being) in the current year and premonition of what the future holds in store for the society. Elders and titled men usually preside over the ritual aspect of the festival. Sample tubers from the year’s harvest are assembled for display in the venue selected for the festivities. The womenfolk are in-charge of preparing the yam for eating. In elaborate settings, the yam is prepared in three ways; roasting in open fire, cooked in a porridge with vegetables or pounded to make the delectable yam foofoo and accompanying vegetable soup.

Prayers and libation said with the colanut ritual sets the stage for the Iri Ji ceremony. The ritual is in three segments: presentation of kola, breaking of kola and then the sharing of the broken kola to reach everyone present at the occasion. When the prepared dishes are ready to be served, whoever is presiding over the occasion is called upon to symbolically cut the yam by slicing a piece, dipping it in seasoned palm-oil sauce and then eating it. The yam harvest for the new year is, thereafter, declared ready and fit for general consumption. Food is usually served at this juncture with all the appurtenances offered to spruce up such festive occasions. 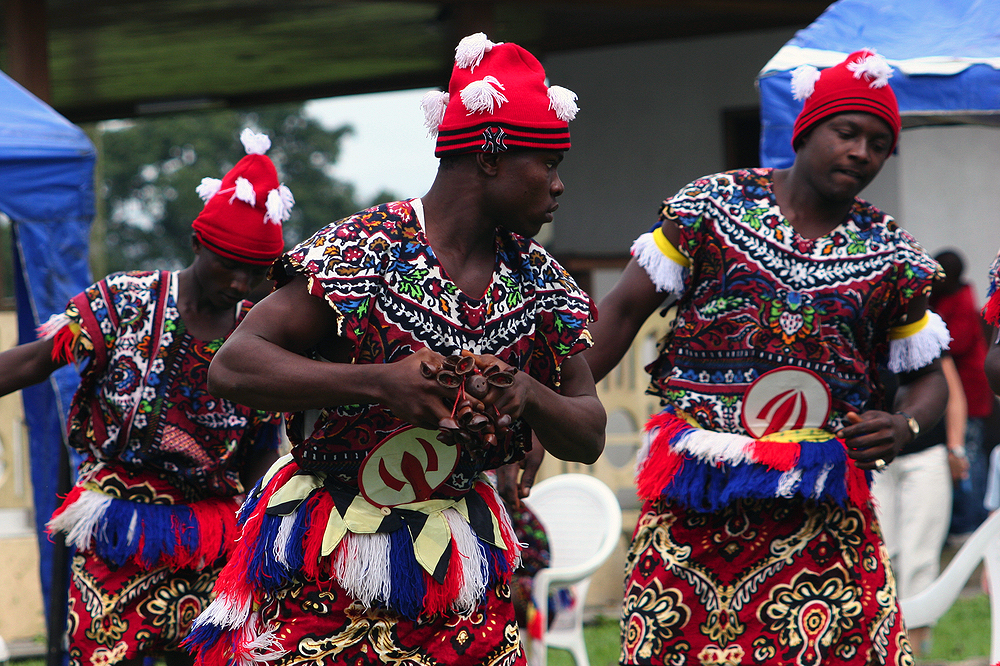 Colorfully attired Igbo traditional dancers thrill audience during a cultural event. Such a dance troupe could be accompanied by masquerades.

Dance presentations and other cultural shows then follow. Masquerades are regular features of Iri Ji festivals that are orchestrated in the traditional fashion. Masquerades emblematize the presence of Igbo ancestral spirits as the living welcome and celebrate arrival of the season’s new yam. The New Yam assures sustenance and continuity blessed with anticipation of plenty to nourish the body and soul of who partake in the Iri Ji Festival. This video shows that the 2017 Iri Ji Festival staged in Melbourne for the Australian Igbo Diaspora and their guests was a blast!