Islam Is Not Only a Religion, but Also a Political Ideology – Says Geert Wilders, a Political Party Leader in Netherlands

– by Geert Wilders, a Member of the Dutch Parliament.

In a generation or two, the US will ask itself: “Who lost Europe?” Here is the speech of Geert Wilders, Chairman, Party for Freedom the Netherlands, at the Four Seasons in New York, introducing an Alliance of Patriots and announcing the Facing Jihad Conference in Jerusalem.

Thank you very much for inviting me.

I come to America with a mission. All is not well in the old world. There is a tremendous danger looming, and it is very difficult to be optimistic. We might be in the final stages of the Islamization of Europe. This not only is a clear and present danger to the future of Europe itself, but it is also a threat to America and the sheer survival of the West. The United States is the last bastion of Western civilization, facing an Islamic Europe.

First, I will describe the situation on the ground in Europe. Then, I will say a few things about Islam. To close I will tell you about a meeting in Jerusalem.

The Europe you know is changing.

You have probably seen the landmarks. But in all of these cities, sometimes a few blocks away from your tourist destination, there is another world. It is the world of the parallel society created by Muslim mass migration.

All throughout Europe, a new reality is rising entire Muslim neighborhoods where very few indigenous people reside or are even seen. And if they are, they might regret it. This goes for the police as well. It’s the world of head scarves, where women walk around in figureless tents, with baby strollers and a group of children. Their husbands, or slaveholders if you prefer, walk three steps ahead. There are mosques on many street corners. The shops have signs you and I cannot read. You will be hard-pressed to find any economic activity. These are Muslim ghettos controlled by religious fanatics. These are Muslim neighborhoods, and they are mushrooming in every city across Europe. These are the building blocks for territorial control of increasingly larger portions of Europe, street by street, neighborhood by neighborhood, city by city.

There are now thousands of mosques throughout Europe with larger congregations than there are in churches. And in every European city, there are plans to build super-mosques that will dwarf every church in the region. Clearly, the signal is: we rule.

Many European cities are already one-quarter Muslim: just take Amsterdam, Marseille and Malmo in Sweden. In many cities, the majority of the under-18 population is Muslim. Paris is now surrounded by a ring of Muslim neighborhoods. Mohammed is the most popular name among boys in many cities. 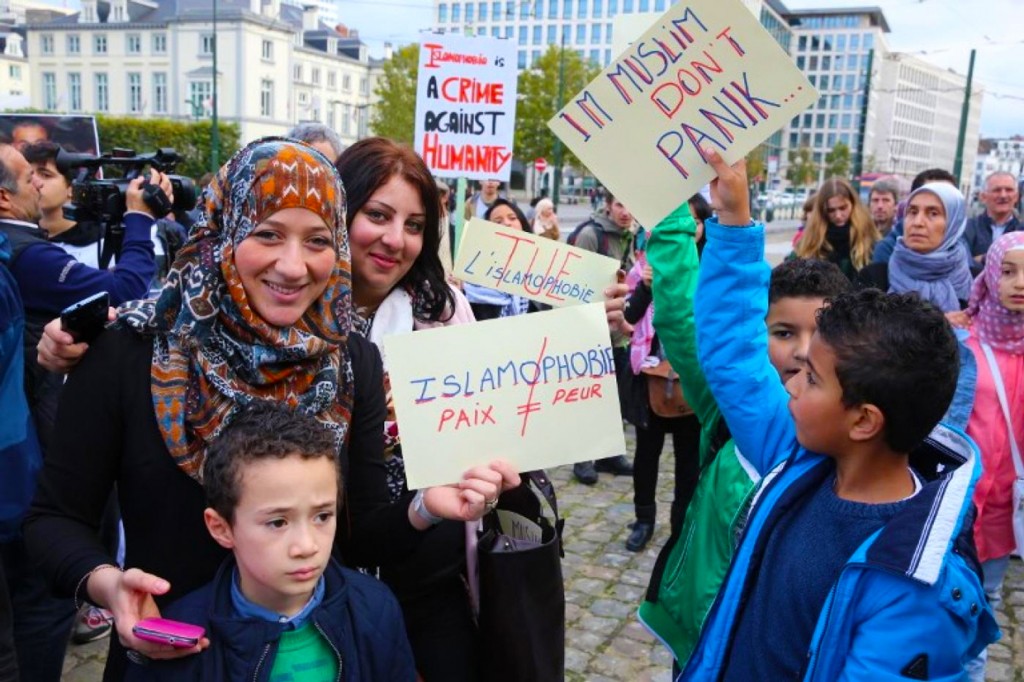 It is estimated that more than 50 million Muslims now live in Europe. The continent shall be majority Muslim by end of the 21st Century.

In some elementary schools in Amsterdam, the farm can no longer be mentioned, because that would also mean mentioning the pig, and that would be an insult to Muslims.

Many state schools in Belgium and Denmark only serve halal food to all pupils. In once-tolerant Amsterdam, gays are beaten up almost exclusively by Muslims. Non-Muslim women routinely hear ‘whore, whore’. Satellite dishes are not pointed to local TV stations, but to stations in the country of origin.

In France, schoolteachers are advised to avoid authors deemed offensive to Muslims, including Voltaire and Diderot; the same is increasingly true of Darwin. The history of the Holocaust can no longer be taught because of Muslim sensitivity.

In England, sharia courts are now officially part of the British legal system. Many neighborhoods in France are no-go areas for women without head scarves. Last week, a man almost died after being beaten up by Muslims in Brussels, because he was drinking during the Ramadan.

Jews are fleeing France in record numbers, on the run for the worst wave of anti-Semitism since World War II. French is now commonly spoken on the streets of Tel Aviv and Netanya, Israel. I could go on forever with stories like this. Stories about Islamization.

A total of fifty-four million Muslims now live in Europe. San Diego University recently calculated that a staggering 25 percent of the population in Europe will be Muslim just 12 years from now. Bernhard Lewis has predicted a Muslim majority by the end of this century.

Now, these are just numbers. And the numbers would not be threatening if the Muslim-immigrants had a strong desire to assimilate. But there are few signs of that. The Pew Research Center reported that half of French Muslims see their loyalty to Islam as greater than their loyalty to France. One-third of French Muslims do not object to suicide attacks. The British Centre for Social Cohesion reported that one-third of British Muslim students are in favor of a worldwide caliphate. Muslims demand what they call ‘respect’. And this is how we give them respect. We have Muslim official state holidays.

The Christian-Democratic Attorney-General is willing to accept Sharia in the Netherlands if there is a Muslim majority. We have cabinet members with passports from Morocco and Turkey.

Muslim demands are supported by unlawful behavior, ranging from petty crimes and random violence; for example, against ambulance workers and bus drivers, to small-scale riots. Paris has seen its uprising in the low-income suburbs, the banlieues. I call the perpetrators ‘settlers’. Because that is what they are. They do not come to integrate into our societies; they come to integrate our society into their Dar-al-Islam. Therefore, they are settlers.

Much of this street violence I mentioned is directed exclusively against non-Muslims, forcing many native people to leave their neighborhoods, their cities, their countries. Moreover, Muslims are now a swing vote not to be ignored.

The second thing you need to know is the importance of Mohammed the prophet. His behavior is an example to all Muslims and cannot be criticized. Now, if Mohammed had been a man of peace, let us say like Gandhi and Mother Theresa wrapped in one, there would be no problem. But Mohammed was a warlord, a mass murderer, a pedophile, and had several marriages – at the same time. Islamic tradition tells us how he fought in battles, how he had his enemies murdered and even had prisoners of war executed. Mohammed himself slaughtered the Jewish tribe of Banu Qurayza. If it is good for Islam, it is good. If it is bad for Islam, it is bad.

Let no one fool you about Islam being a religion. Sure, it has a god, and a hereafter and 72 virgins. But in its essence, Islam is a political ideology. It is a system that lays down detailed rules for society and the life of every person. Islam wants to dictate every aspect of life. Islam means ‘submission’. Islam is not compatible with freedom and democracy, because what it strives for is sharia. If you want to compare Islam to anything, compare it to communism or national socialism, these are all totalitarian ideologies.

Now, you know why Winston Churchill called Islam ‘the most retrograde force in the world’ and why he compared Mein Kampf to the Quran. The public has wholeheartedly accepted the Palestinian narrative and sees Israel as the aggressor. I have lived in this country and visited it dozens of times. I support Israel. First, because it is the Jewish homeland after two thousand years of exile up to and including Auschwitz; second because it is a democracy, and third because Israel is our first line of defense.

This tiny country is situated on the fault line of jihad, frustrating Islam’s territorial advance. Israel is facing the front lines of jihad, like Kashmir, Kosovo, the Philippines, Southern Thailand, Darfur in Sudan, Lebanon, and Aceh in Indonesia. Israel is simply in the way. The same way West Berlin was during the Cold War.

The war against Israel is not a war against Israel. It is a war against the West. It is jihad. Israel is simply receiving the blows that are meant for all of us. If there would have been no Israel, Islamic imperialism would have found other venues to release its energy and its desire for conquest. Thanks to Israeli parents who send their children to the army and lay awake at night, parents in Europe and America can sleep well and dream, unaware of the dangers looming.

Many in Europe argue in favor of abandoning Israel in order to address the grievances of our Muslim minorities. But if Israel were, God forbid, to go down, it would not bring any solace to the West It would not mean our Muslim minorities would all of a sudden change their behavior and accept our values. On the contrary, the end of Israel would give enormous encouragement to the forces of Islam. They would, and rightly so, see the demise of Israel as proof that the West is weak and doomed. The end of Israel would not mean the end of our problems with Islam, but only the beginning. It would mean the start of the final battle for world domination. If they can get Israel, they can get everything. So-called journalists volunteer to label any and all critics of Islamization as a ‘right-wing extremists’ or ‘racists’. In my country, the Netherlands, 60 percent of the population now sees the mass immigration of Muslims as the number one policy mistake since World War II. And another 60 percent sees Islam as the biggest threat. 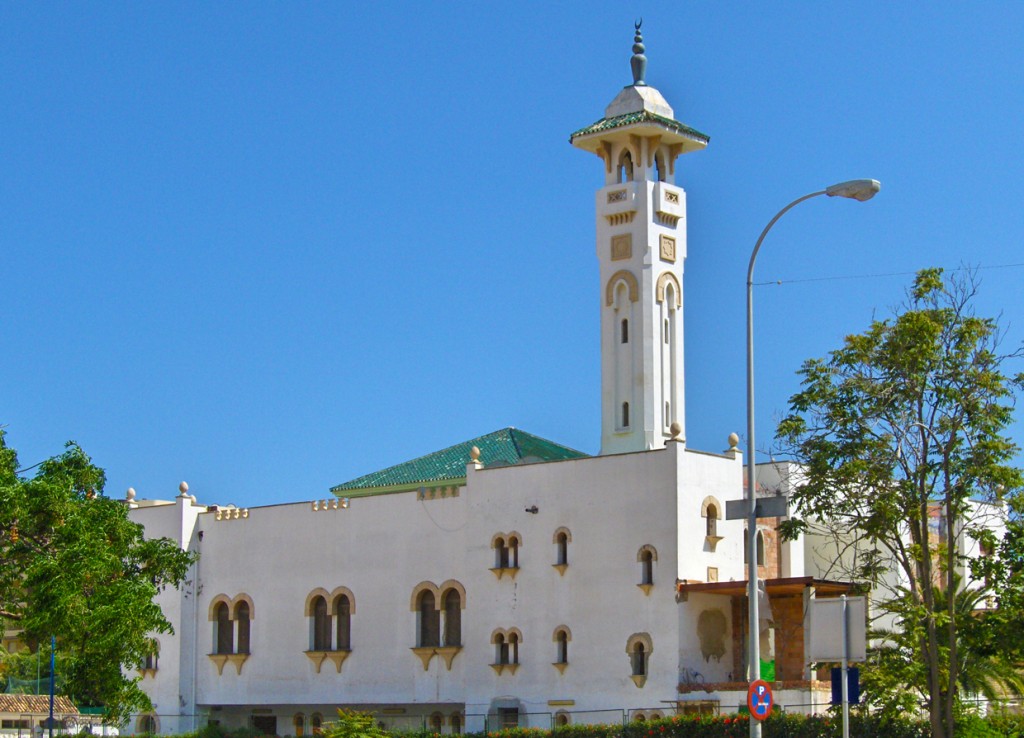 Mosque in Fuengirola, a Southern Spain’s coastal resort city, built in 1994. There are many older mosques some of which were built centuries ago when the Iberian peninsula was occupied by Muslim Moors.

Yet, there is a greater danger than terrorist attacks; the scenario of America as the last man standing. The lights may go out in Europe faster than you can imagine. An Islamic Europe means a Europe without freedom and democracy, an economic wasteland, an intellectual nightmare, and a loss of military might for America – as its allies will turn into enemies, enemies with atomic bombs. With an Islamic Europe, it would be up to America alone to preserve the heritage of Rome, Athens and Jerusalem…

Dear friends, liberty is the most precious of gifts. My generation never had to fight for this freedom, it was offered to us on a silver platter, by people who fought for it with their lives. All throughout Europe, American cemeteries remind us of the young boys who never made it home, and whose memory we cherish. My generation does not own this freedom; we are merely its custodians. We can only hand over this hard-won liberty to Europe ‘s children in the same state in which it was offered to us. We cannot strike a deal with mullahs and imams. Future generations would never forgive us. We cannot squander our liberties. We simply do not have the right to do so.

We have to take the necessary action now to stop this Islamic stupidity from destroying the free world that we know.

*Please, take the time to read and understand what is written here. Please, send it to every free person that you know, it is so very important.”