The Abuja Declaration of 1989 – A Harbinger of the Genocide, Ethnic Cleansing and Islamization We See Today

During the reign of autocratic military dictatorship, the Fulani irredentist movement schemed and sought to implement, at least in its rudimental form, the essential stratagems to accomplish the total Islamization of Nigeria within a single generation. The Fulani aristocracy and intelligentsia, who controlled and dominated the government bureaucracy of Nigeria’s military era, operated in lockstep with the autocrats at the helm. Political activities were banned and the press was also effectively muzzled. Leading figures within the Fulani intelligentsia were the defacto special advisers that the ruling military strongmen, who were mostly Muslims, relied upon for policy direction. It was this sort of governance setup that enabled the convocation and hosting of an international Muslim group called Islam in Africa Organization in Abuja in November 2010.

Top of the to-do list issued in the Islamist conference’s communique included the following:

To aid the immediate and prompt implementation of the Abuja Declaration, the then military president, General Ibrahim Badamosi Babangida, allegedly donated the sum of US$21 billion to the Islamic Development Fund of the OIC to expedite the total Islamization of Nigeria, in particular, and the African continent, in general. This means that the revenue derived from the sale of crude oil and natural gas, which belong to the ancestral lands of the Christian South, has been effectively hijacked and diverted toward achieving a total eradication of the religion practiced by the majority Christian inhabitants of the Niger Delta who own the oilfields. 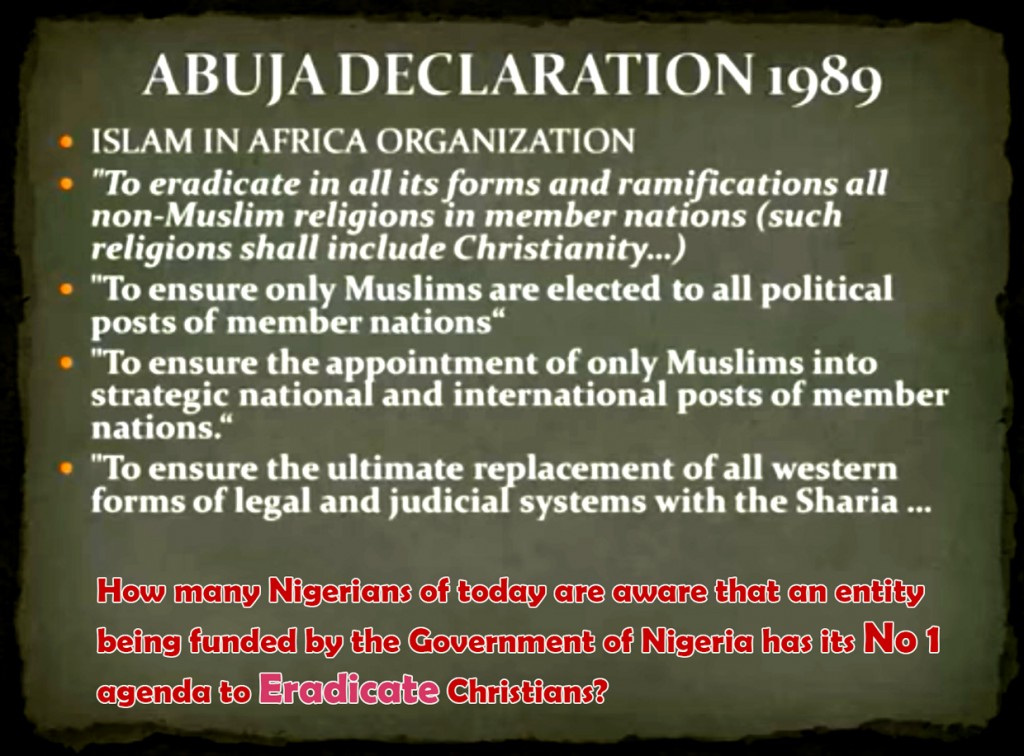 It is amazing that an overwhelming majority of Nigerian Christians, including the leadership echelons, are nonchalant or unaware that the government of Unitary Nigeria has funded and is still funding international Islamist radical groups to eradicate Christianity in their own country. It is easy to see that the principles enunciated in the Abuja Declaration have been followed as the blueprint byMuslim aristocrats of the Far North in pressing for the adoption of the Sharia legal system in the early 2000s. Having adopted the Sharia through legislative means in the Muslim-majority Far North, the tactics for accomplishing the same feat in the Christain-majority Middle Belt and South are significantly different. The Fulani irredentists, being ever cognizant of the insurmountable roadblocks experienced by their ancestors who attempted unsuccessfully to conquer the Lower Middle Belt during the Jihad of 1804 – 1808, tend to believe that a scorched-earth belligerent approach can get the job done this time around. Ethnic cleansing through mass genocide on the indigenous peoples of the Middle Belt and the South is the preferred means for achieving both political dominance by the Fulani aristocracy and the Islamization of Unitary Nigeria in one fell swoop.

This video attempts to document the incredible instantaneous massacre of 500 individuals during a single night’s operation by bloodthirsty Islamist jihadists on the payroll of MACBAN and political leaders of the Sharia Territory. And as usual, minders of Unitary Nigeria have been incapable of arresting anyone for these crimes of senseless killings, arson and brigandage which have become commonplace in the Sharia Territory and other outposts occupied by the Islamist jihadists. One thing is clear. The perpetrators of ongoing murderous mayhem targeting Nigerian Christians are all reading from the same script. The Abuja Declaration of 1989 is that script.