The opinion below was motivated by the video embedded above.

This is the bane of the Igbo nation today. Abuse of wealth which often arises from an illicit and inordinate quest for vainglorious money. It even makes some of us, who denounce wealth and abandoned the comfort of our homes and offices for the sake of defending the Igbo cause, a mockery of the society. For around this form of wealth is built a mind lacking in conscience, legitimacy of purpose, moral sense of judgment and patriotism constructed on the fulcrum of historical experience. Ironically, it is often common among those with a pitiable foundation of childhood poverty.

This explains why it is difficult today mostly among the Igbo to raise an army of revolutionary-minded youth with a flowering patriotic spirit who are willing and ready to risk their lives for the future of their generations to come. How can this group of people understand what is happening today among their people in their homeland? No! Never will they understand because their mindset objective is the primitive accumulation of money and there, they have arrived!

The question here is, can anyone who made his money through legitimate means under the condition of high blood pressure and sweat abuse it in this manner? To most Igbo youth and even some so-called matured minds, this is the model everyone among their children should adopt. Otherwise, I see no reason why the person who forwarded this scene to this forum should leave it with no comment. 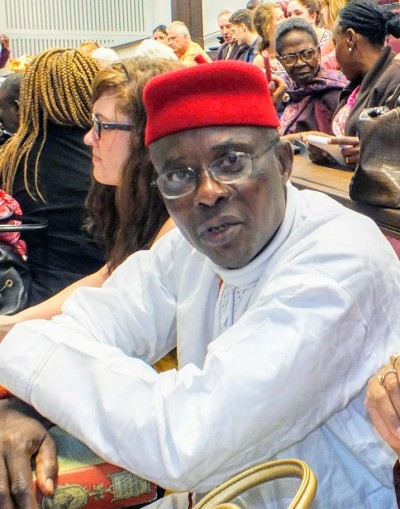 Dr. Tony Nwaezeigwe seated in an auditorium of Cambridge University, UK in May 2014 during a lecture to memorialize the doyen of Igboukwu archeology, Prof. Thurstan Shaw

The Igbo, as a people, should begin, as a matter of urgency, to deconstruct their minds from this vainglorious mindset if they want to win the ongoing self-actualization war. For the victory of any just war must begin from a sound spiritual foundation bound by conscious historical experience and directed by morally conscious leadership.

Today, we should not see the present battle as just a struggle for self-preservation, for most of us have but a little while to remain on the present mother earth. On the other hand, we should most conscientiously regard it as a struggle to preserve our generations yet unborn.  For when a struggle is solely hinged on self-preservation, its course becomes predicated on many incidental factors. One of such factors and indeed the most destructive is the quest for immediate personal benefit as a consequence of such struggle. In other words, such an individual sees himself as being driven by the force of mercenary spirit. He becomes a mercenary unto himself. This is what most Igbo are today, both the leaders and the led.

On the other hand, the man who fights for the sake of the preservation of the generations to come, of course, is driven by a vision of self-sacrifice that is characterized by his readiness to confront a state of self-denial which could even lead to martyrdom. We should not all forget that both Christianity and sets of political freedom we enjoyed today are founded on this self-denial approach. Suffice it to  say that this is the very secret of Jewish perseverance in all their many centuries of trials of all kinds; from their expulsion from Jerusalem by the Romans in 70 AD, through their many sad experiences that were characterized by uncountable pogroms, denials, and racial stigmatization culminating in the Nazi Holocaust and their eventual independence as a sovereign nation of Israel.

This is the driving force in all their victories today. Which people on earth today can then challenge the Jews in the competition for trials and sufferings? A lesson for the Igbo.