Joe Igbokwe: A House Slave to Economic Opportunities Offered by the Lagos Seaport

Obi Nwakanma wrote a piece that convincingly tagged Joe Igbokwe as an Efulefu Igbo “Manchurian Candidate” in the article published at https://goo.gl/pP81GK. The recent online post written by Joe Igbokwe was intended to contrast his “impressive” autobiography with that of Nnamdi Kanu, the leader of IPOB. He paints himself as a self-made Nnewi upstart who struck gold in Lagos by knowing the right people and doing whatever it would take to make a breakthrough for personal prosperity. He believes that his life’s story surely trumps that of Nnamdi Kanu who is currently making waves of tsunami proportions in the Lower Niger territory (a. k. a. Greater Biafra) since his release from the Abuja gulag.

Joe Igbokwe perceives Nnamdi Kanu and other pro-Biafra agitators as heavily committed to goals which are antithetical to those of the quintessential Igbo Lagosian like him. His autobiagraphy portrays a man driven by an obsessed quest for personal success as measured only through material acquisitions. His sense of cultural pride is overwhelmed by focused drive to get the lion share of an ever-shrinking pie in Lagos and elswhere nationwide.

NNAMDI KANU CALLED ME A HUNGRY SLAVE RESIDING IN LAGOS AND I HAVE FOUND THE NEED TO TELL MY STORY AGAIN FOR RECORD PURPOSES. I WANT NNAMDI TO TELL HIS OWN STORY TOO. 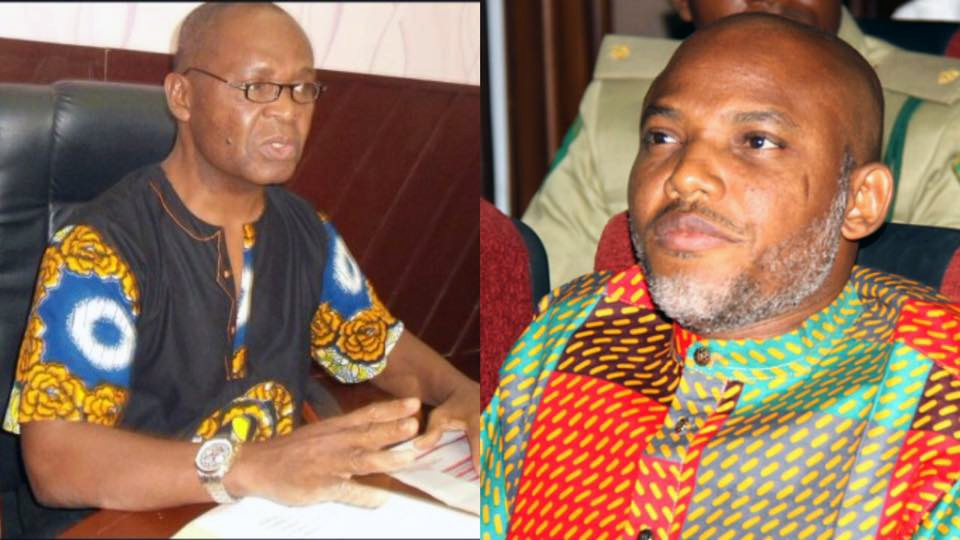 Joe Igbokwe (left) sees Nnamdi Kanu (right) as nothing more than a spoilsport. Igbokwe has worked so hard with his mentors in the ruling party to secure power at the center only for Kanu & IPOB to emerge out of the blue to put sand in the former’s garri.

In 1971, after my primary school education, poverty drove me to Lagos to find something to do to help my poor mother and siblings. Civil War devastated my father’s thriving business in Onitsha and we all suffered from 1966 to 1970 when the war ended.

With four wives and 34 children, my parents could not cope any more. My brothers and sisters dropped out of school to learn a trade. Because I was a little ‘sharp’ in school, my father encouraged me to finish primary school. It is needless here to recall how I and few of my siblings survived to finish our primary education. Consequently when my mates were taking Common Entrance Examination, I did not because there was no need to do so. No money, no three square meals a day, no good clothing, just nothing.

My mother encouraged me to travel with friends to Lagos. We landed at Sawmill Ebute Metta where I worked as a sawdust carrier at seven Shilling, six Pence a day. My job was to pack sawdust from the machines to the Lagoon from 7:00 am to 5 pm daily. I did this for nearly two years and later I became a danfo conductor plying Idioro/Ajegunle axis. From there I joined my brother in a supermarket business at Ijesha Road, Surulere. I did this until I returned home during Christmas in December 1973. I came home to meet my friends I was beating academically in school trying to make me feel and look inferior. Again I also noticed while in Lagos that if I fail to go to school, I may end up doing menial jobs meant for illiterates till the end of age. I decided to go back to school to add values to my life. But where are the school fees? There was nothing. How I managed to get the first school fee to start and what happened thereafter will take a book to do the narrative.

In 1979, I left Okongwu Memorial Grammar School Nnewi with Division One and was the school Head Boy. I taught in the same school as an Auxiliary Teacher from 1979 – 1980. In 1980 I got admission to read Mechanical Engineering at the University of Nigeria Nsukka and graduated in 1985. I did my Youth Service in Ogun State and thereafter I returned to Lagos in 1986 to begin a journey to where I am today. I walked the streets of Lagos from 1986 – 1988 until the then military government headed by Gen Ibrahim Babangida set up the National Directorate of Employment, (NDE) to encourage graduates to start their own businesses. I got a loan of N27,500, using my NYSC discharge Certificate and my Degree Certificate as collateral at 9% interest rate. I set up a Restaurant Business in Western Avenue, Lagos and hit an instant success. While doing this business, I spread my nets also to the auto spare parts market in Lawanson, Surulere where my brother thrives as a very successful importer. I opened a shop there and got a boy to take charge of the business. From there, I entered into Auto dealership in Western Avenue, Surulere. I paid back that loan in full and collected back my certificates.

In 1995, I wrote my first book, Igbos: 25 Years After Biafra. I also established National Vision Newspapers in 1997. In 1999, I wrote my second book: Heroes of Democracy. In 2004, I co-authored 2007: The IBB Option with my good friend, Peter Claver Oparah. One thing led to another. I became an opinion molder, a public commentator, political analyst, writer and an advocate of the peoples’ cause. I bought my first car in 1990 and became a millionaire in 1995 after launching of my first book.

In 2006, the then Governor of Lagos State, Asiwaju Bola Ahmed Tinubu, made me the pioneer General Manager of the Lagos State Infrastructure & Regulatory Agency (LASIMRA) and I was there for almost 10 years. I served Asiwaju’s government for the remainder of his days as Lagos Governor. I served His Excellency Governor Babatunde Fashola for 8years. In September 2015, His Excellency Governor Akinwunmi Ambode moved me to Wharf Landing Fees Collecting Authority Apapa as Chairman. I became the Publicity Secretary AC, ACN, and APC since late 2006 till date. By the grace of God I have been the Chairman of Conference of APC Publicity Secretaries (CAPS) in Nigeria since 2014.

These positions and exploits have put me in the limelight in Lagos and Nigeria since the early ’90s, and God has been kind to me. These offices have opened the doors of the rich and poor to me. They have opened the inner ways,byways, subways, expressways and highways to the corridors of power in Nigeria. I have been connected to the pace setters, policy makers, the movers and shakers of blue chip companies, news makers and the powers that be in Lagos. The magic of Lagos, the beauty of Lagos, the dynamics of Lagos, the glory of Lagos, the momentum of Lagos, the capacity, capability and the strength of Lagos touched me in no uncertain terms since 1986 (32 years ago) till date…..and still counting. 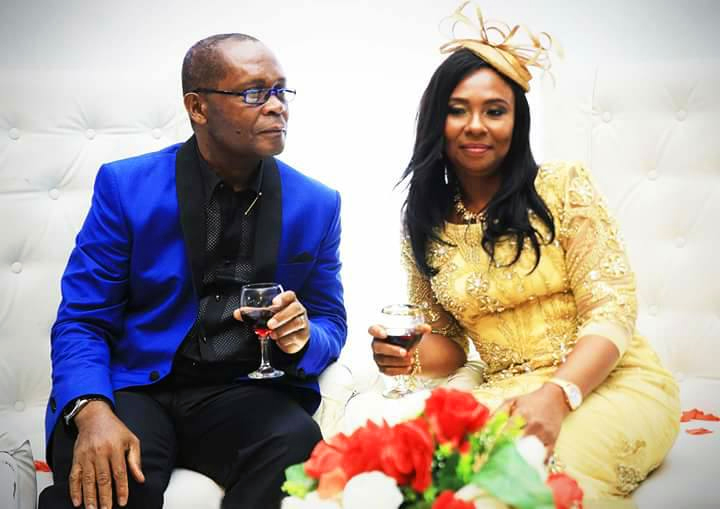 Joe Igbokwe relishing the urbane Lagos lifestyle that only personal prosperity can accord him. But as a slave (“House nigger”), he serves at the pleasure of his masters who would ONLY continue to reward him as long as he continues to perform his assigned chores as a trusted “good boy”.

My sojourn in Lagos for 32 years has also opened my eyes as a historian as to what Lagos has done for my people from South East. Today, as I write, the Igbo do not have a quarter of what they have in Lagos in the Southeast in terms of investments. As I write this book, Igbo are the second most populous ethnic group in Lagos. Today, Igbo exert tremendous influence and capacity in Lagos and its success story. Few years back, two prominent sons of Nnewi told me in confidence that they did not know they have been wasting their time in Nnewi until they came to Lagos. They said Lagos opened doors for limitless opportunities and endless possibilities. I have seen people come from other parts of Nigeria to hit gold mine in Lagos.

I got married in 1990 and all my five kids are all Lagosians and so are millions of Igbo kids born in Lagos. They have lived most of their lives in Lagos, schooled in Lagos, worked in Lagos, made friends in Lagos and have keyed to the Lagos success story. They know any other place except Lagos. Lagos is their home. This is not limited to Igbo alone but all other ethnic groups and of course, Yoruba from outside Lagos.

Lagos is a melting pot, a mega city, a cosmopolitan beehive. Lagos controls the heartbeat of Nigeria, its wealth, its influence and its strategic socioeconomic and political hub. Lagos changed my thinking and original thoughts, Lagos emboldened me, Lagos motivated me, Lagos challenged me and Lagos made me. I can say no less. This is the story of Lagos, my Lagos. It is still unraveling, not for me alone but millions of other Nigerians, to the glory of God.”