Below is the text of  Remarks by Archbishop Augustine Obiora Akubeze at the Peace Protest by CBCN in Abuja on March 1, 2020

Today we the Catholic Bishops of Nigeria and with significant support of priests, consecrated persons and our beloved lay faithful embark on a peaceful protest against the high level of insecurity in every part of Nigeria. We are on this peaceful protest on behalf of the over 22 million Catholics and over 100 million Christians in Nigeria. We are protesting against the brutal killings of innocent Nigerians by Boko Haram and terrorists’ herdsmen who are invading people’s farmlands forcefully.

We are gathered here to register our protest against the kidnapping for ransom in every part of Nigeria. We are gathered to mourn the women, children, babies, and men who have been killed by the terrorists. We are gathered to let the Federal Government of Nigeria know that we are tired of hearing from them that Boko Haram has been “technically defeated” even when they still attacked with impunity. Many local and international security experts have concluded that the terrorists use very sophisticated weapons.

Our protest is part of our religious obligation to speak prophetically against whatever is against God’s commandment. The killing of God’s children is evil. The failure to protect innocent people from relentless attacks is evil. The lack of prosecution of terrorists is evil. Our Government response to terrorist attacks is, for lack of better words, far below average. There have been too many mass burials. Too many kidnappings of school children, of travelers, invasion of peoples’ homes, invasion of sacred places like Churches, mosques, seminary, etc.

We, sometimes, read of our Government sending condolence messages to Western countries when there is a terrorist attack that may have led to the death of one or two persons. We commend the Federal Government for doing this. But we are utterly surprised to discover that the same Nigerian Federal Government will not even send a condolence message to families who have suffered fatalities in the hands of Boko haram. We see our President rarely visit or even speak to Nigerians when there are terrorist attacks in Nigeria.

The several attacks on the lives of Nigerians are almost a new normal. Our Government seems utterly insensitive to the plight of Nigerians. A Government that totally ignores the cries of those who elected them is set up for a fantastic failure. It doesn’t matter which party is in power. Only recently we have seen that some of those in the Presidency have discovered that they can no longer go to some places where they campaigned before the election. They are being booed by those who once supported them because these Nigerians feel let down.

To Mr. President, Your Excellency, we are here to let you know that we pray every day for the success of your Government in dealing with insecurity in Nigeria. We pray daily for the Government you lead to bring Nigerians together and make every Nigerian feel that they are equal in the country irrespective of their ethnic or religious background. We want you to know that we pray to God to help your Government to realize that loyalty to Nigerians, loyalty to the unity of the country should trump the desire by some people around to fill sensitive top security positions with people from one section who shared one religious belief. This is a recipe for disaster in a multi-ethnic, and multi-diverse nation.

To President Buhari, we say, please listen to the cries of Nigerians. Listen to the National Assembly when they, in a unanimous voice, call you to change the security chiefs. Listen to Muslim leaders who call for more Government proactive actions to prevent terrorist attacks in Nigeria and especially in Northeastern Nigeria. Mr. President, please ask for foreign help to stop this over 12 years of terrorist attacks on Nigerians. Mr. President, stop those who work with you from politicizing the killings of Nigerians. The bombs of the terrorists do not know who is a member of APC or PDP. Mr. President, Nigeria is a secular State, act to reassure Nigerians that there is no agenda to Islamize Nigeria. Your silence is breeding and sowing seeds of mistrust and the longer it stays this way, the more you lose those who could have given you the benefit of the doubt. Only a few Nigerians can defend you with reasons. Only a few Nigerians can argue that your silence is not an endorsement of the barbaric actions of the terrorists. 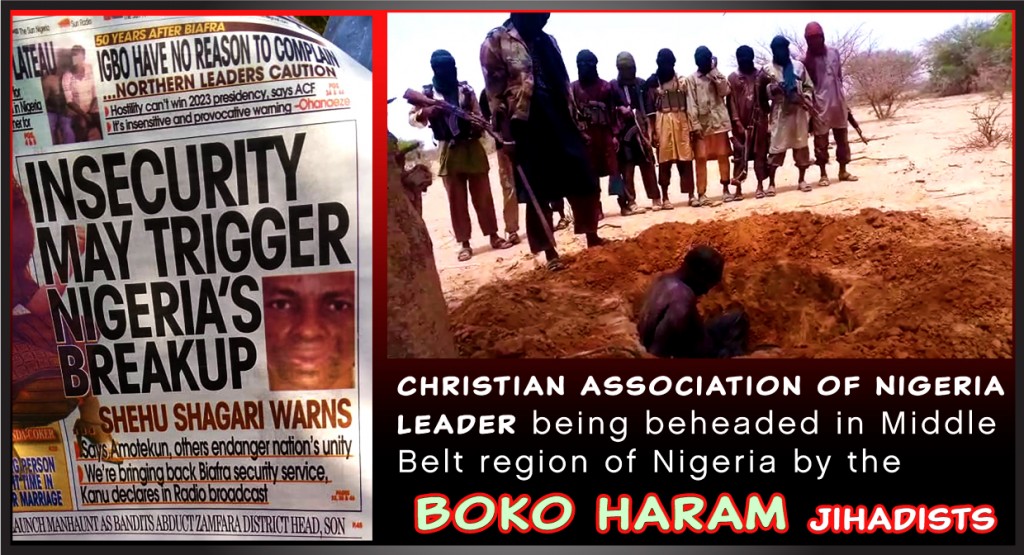 We, as a Church, do not support any political party. We condemn any form of social injustice perpetrated against the people. The lack of significant actions to prevent and secure the release of those being held in captivity by Boko haram is unacceptable to us. We cannot understand why the Government is not able to secure the release of the rest of the Chibok girls, the release of Leah Sharibu and others still being held. We cannot understand why the Government reaction to the beheading of Reverend Lawan Andimi has not shown that there is going to be any consequences upon those responsible. Nigerians are tired of reading of the killing of an orphan (a seminarian) who was just eighteen years old. Nigerians are tired of hearing of the inexcusable actions of the Government in their response to these and many other sad cases.

We, the Catholic Bishops of Nigeria, call on the international community to come to the aid of Nigeria. We must see ourselves as a global family in the world. The tears and pains of the helpless persecuted Christians in Nigeria should be well reported in the West. Western journalists and Western political leaders should give Boko Haram the attention they give to other terrorist groups like Al-Qaeda and ISIS. If the Western media give comprehensive steadfast coverage to the atrocities happening in Nigeria, they will discover that people are dying daily in Nigeria from the hands of Boko Haram about the same way people are dying in Syria.

As we march and protest today, we want all Catholics in Nigeria not to be hopeless. We want Catholics and other well-meaning patriotic Nigerians to stand together to fight this terrorism. We must speak out against government inaction and poor response. We must work and pray for change to happen in Nigeria. As we entrust our country Nigeria to God, let us also entrust the terrorists into the hands of God. God can change their hearts of stone to a heart of flesh. Let us pray for their conversion. Let us pray to God to help our leaders to have the wisdom and courage to do what is good for every Nigerian. Let us eschew every form of hate speech or incitement of violence. Only Love can conquer violence and hatred.

Thank you for your attention.