Leah Sharibu: When Hope Is Deferred – a Guardian Editorial

It is quite significant to remind the authorities in Abuja today that the nation is still waiting for freedom for Citizen Leah Sharibu, the only Dapchi schoolgirl and Christian who is still being held in captivity because of her faith. Some aid workers had the other day raised a concern about her safety, but the Federal Government said all was well with her, and they were continuing with negotiation to set her free. We feel it is expedient to remind the president that people’s anxiety is beginning to turn to fear of the unknown. And the implication is that when hope is deferred, as the ancient word notes, it makes the heart sick, but a longing fulfilled is a tree of life.

While Zainab Aliyu, a Muslim girl who was arrested and detained in Saudi Arabia for alleged drug trafficking and whose release was secured through the intervention of the Federal Government arrived in the country the other day, families and well-wishers marked the 16th birthday of Leah Sharibu, still held in captivity with several activities in Abuja, Jos and Lagos. As we noted before here, this is not a good contrasting story in nation-building at this time.

Essentially, to date, Leah Sharibu, The Guardian’s 2018 ‘‘Person of the Year,’’ is still in the hands of her abductors, the Boko Haram terrorists, who made the renunciation of her faith a precondition for her release, which she declined.

While 104 of her colleagues were released on March 21, 2018, five of the hapless girls died in captivity. Although, the Minister of Information and Culture, Alhaji Lai Mohammed announced then that the 104 girls’ release was unconditional, the refusal of the terrorist group to release Leah since last year, on the condition that she converts to Islam, questions this view and buttresses some perception that the Federal Government’s negotiations through a back-channel led to the release of the girls.

So, it is indeed becoming inexcusable that the Federal Government has not been able to negotiate Leah’s release more than two years on. This may account for the resentments by various individuals and groups within and outside Nigeria; and aptly captured in our earlier question: “Mr. President, where is Leah Sharibu?”

It would be recalled that this Christian girl, Leah, still held by Boko Haram terrorists during the third quarter of 2018, in a clear audio message, begged President Buhari Muhammadu Buhari to come to her rescue. However, the government said the clip would be verified to be sure that it was Leah’s voice. There has been no update on the authenticity of the voice since.

It will be recalled that on Wednesday, October 3, 2018, Buhari consoled Leah Sharibu’s biological family and assured her parents that the Federal Government would do its utmost for the safety and security of Leah. The president was quoted as telling Mrs. Sharibu: “I convey my emotion, the strong commitment of my administration and the solidarity of all Nigerians to you and your family as we will do our best to bring your daughter home in peace and safety.”

Despite Buhari’s assurance to Rebecca Sharibu, mother of Leah, the Leah albatross still hangs on the neck of Abuja as the girl is still held in captivity! To date, there is no update on the plight of the unlucky girl, and her whereabouts have remained unknown. It is reproachful that Nigeria’s daughter is still held hostage, and the government appears unconcerned about that tragedy. 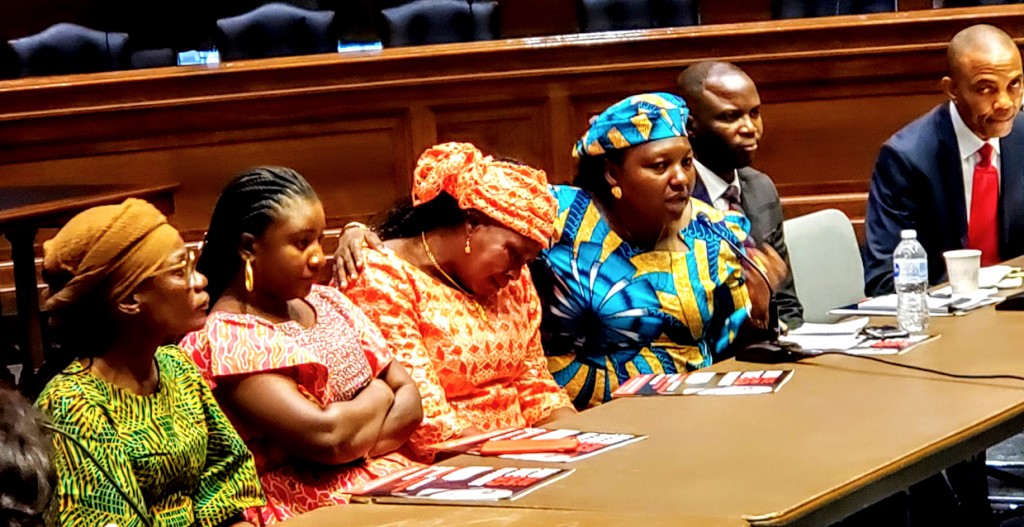 Mrs. Rebecca Sharibu, 3rd from left, sobs while making an emotional plea for the immediate release of her daughter, Leah, at an Ambassador Brownback’s Roundtable on Religious Freedom at the Dirksen Senate Building, US Capitol, Washington, DC last June.

This ugly reality is a monumental embarrassment because the ‘‘child’’ Leah had even cried out to her ‘‘father’’ of the nation to rescue her. Nigeria’s leader should note again that the story of Leah Sharibu’s capture and her continued detention by Boko Haram insurgents as a result of her refusal to renounce her faith is legendary. That defiance echoes a bright message of love, selflessness, courage, and hope to our nation. The Leah, this newspaper calls, ‘‘goddess of resistance’’ to terror, is now the number one soldier on the frontline in defense of Nigeria’s now fragile unity, peace, and progress. She is a true heroine.

The word of the president on Leah and the remaining Chibok girls should be his bond! It will be recalled that part of Buhari’s campaign promise on which he won the election in 2015 was that he would work for the return of the Chibok school girls. The remaining 113 Chibok girls and Leah Sharibu are still in Boko Haram’s captivity. They are still our missing daughters!

We will continue to appeal to our leader to please use the doggedness with which he handled the case of Zainab Aliyu’s release for Leah Sharibu. This is one of the ways, Nigeria’s leader can show Nigerian citizens that he is a ‘‘father’’ to all; who has value for human lives and can go to any length to save lives.

As we once noted, rescue efforts of help from foreign powers can be requested when necessary. The Nigerian state should stop being territorial. If it requires expertise from other countries, there should not be pride and vanity displayed over that.

To the parents, friends and relatives of Leah, who have been in agony and waiting for the return of their child, we appeal that you continue to keep hope alive. As Nigeria’s leader returns from Russia, he should be reminded that Citizen Leah is still missing and her parents and indeed Christians in the country are still agonizing about her fate in the camps of the wicked.

We would like to thank the president, sooner than later, for keeping his word by rescuing Leah Sharibu and the remaining Chibok schoolgirls alive and for conquering the enemy called Boko Haram.