Femi Fani-Kayode utilized the televised interview on 2017 June 12th anniversary to rue the tragedy which arbitrary nullification of Moshood Abiola’s election had inflicted on the Nigerian polity. From Kayode’s perspective, Nigeria had enjoyed relative stability until the Ibrahim Babangida-led ruling junta upset the apple cart by annulling a fair electoral contest that saw a Southern Moslem emerging as the president-elect. This development was at variance with the script with which the Northern political establishment has been instructed to manage the affairs of post-colonial Nigeria. The emergence of a Nigerian head of state from outside the Far North was perceived as unconscionable by the powers that were in control in 1993 hence the decision to nullify the otherwise peaceful, free and fair election of June 12th of same year. Repressive force was promptly deployed to crush all protests relating to June 12th presidential result which, up till date, has not yet been released.

He argued that the offer of presidency to Olusegun Obasanjo in 1999 by the Arewa North was intended to placate protesters in the Southwest who were seriously agitating for Yoruba exit from Nigeria in run-up to the scheduled handover of political power by the military to civilians. The multifaceted drive to dismember the country was then put on brake once it became certain that a Yoruba indigene would oversee Nigeria’s affairs from the center of power in Abuja. The country saw 16 years of relative peace until President Buhari’s emergence during the 2015 general elections. Mr. Kayode lays all blames at incumbent President Buhari’s feet for bringing about current upsurge in agitation for self-determination and local control of natural resources. He cited Buhari administration’s obsession with exclusion of his perceived political foes from all important aspects of national governance, particularly on matters that pertain to security, international diplomacy, economy etc. 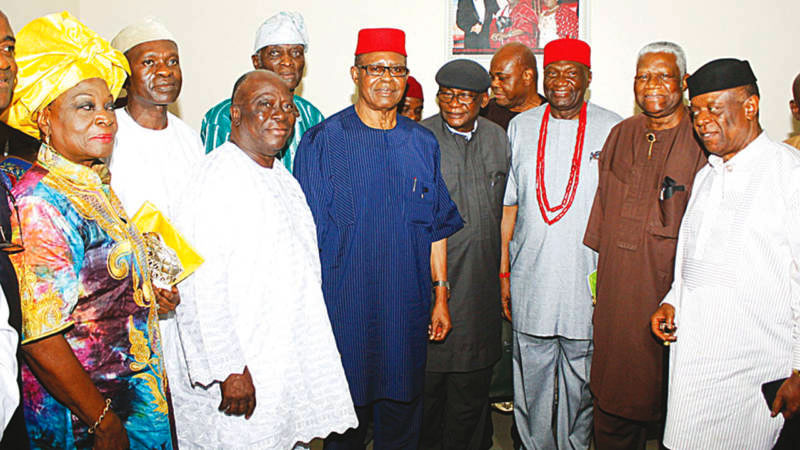 Some of the sociopolitical leaders of the Southern Nigeria, in consultation with the Middle Belt, convened in Lagos to take a stance against the Arewa North and its design to eject Ndiigbo from 19 Northern states.

Superimposed over President Buhari’s penchant for reliance on parochialism in the sharing of national largesse and fantasies about Islamization of the country as a matter of policy forced a critical mass of Nigerians to become, once more, acutely disenchanted with Nigeria whose future is again seen as having been hijacked by scions of the Islamic Sokoto Caliphate. The deliberate unleashing of the murderous Fulani herdsmen militia into the Middle Belt and South by the Miyetti Allah Cattle Breeders Association of Nigeria (MACBAN) and persistent refusal by the Commander-in-Chief to show any interest in protecting the lives and properties of citizens in Christian-dominated zones fueled escalation of pro-Biafra agitation to unprecedented levels. The former central government minister blames the ill-informed “Kaduna Declaration” banning Ndiigbo from all 19 states of the North to have been instigated and supported by loyal adherents of President Buhari’s concept of an Arewa-North-dominated unitary.

The uncouth gambit of expelling Ndiigbo from Northern states has backfired big-time since the Arewa “Youths” quit order has conjured a joint response from the sociopolitical leaders of the South and Middle Belt who have come together to warn the political leaders of the Far North to assure that Ndiigbo are left alone or else. Chief Kayode remarked that if any armed conflict develops as consequence of the quit order issued to Ndiigbo, the Arewa North shall definitely end up being the loser when the dust settles.

The erudite and outspoken politician went on the limb to amplify his total support for restructuring the geopolitical anchors of today’s Nigeria, starting with the universally hated 1999 Constitution which was imposed by forces that get their inspiration from dictates of agonists of perpetual Arewa hegemonic dominance over Nigeria. He concludes this interview by casting serious doubt on Nigeria’s survival unless the country’s geopolitics is restructured in very fundamental ways.