Literacy Is Only the Beginning of Education. It Must Be Accompanied by Scientific Knowledge & Understanding of Human Physiology – Prof. Nwosu

Drifting on the Waves of Superstition: Religion Benumbs the Psyche of Impoverished African Countries

An Op-Ed by Prof. Uchenna Nwosu

Unlike what obtained in many parts of the world, our sub-Saharan African ancestors regrettably failed to invent a form of writing. We, in Igbo-Ukwu, learned the secret of writing and written records only since 1914, for example and are currently, barely in our second or third generation of literacy. As a result of its newness to us, we often treat, with great respect, anything we see in print – so much so that a revered pastor once bragged to me about his spectacular exercise of courage and faith in finding, removing and burning, without adverse consequences, a book of occultism called “The Sixth and Seventh Book of Moses”. Of course, I had to educate him that the book he spoke of was, like any other book, nothing but ink on processed wood pulp, which we call “paper.” It was nothing more and nothing less.

The lesson here is that literacy is only the beginning of education. It must be accompanied by a working scientific knowledge of our universe, as well as the physiology of the human body, in order for us to be better able to distill reality from many ancient writings of innocent fiction. In other words, a degree of scientific knowledge is needed for us to be able to place, in proper perspective, ancient writings by homo sapiens, including the writers of the Holy Bible (Christians), Holy Quran (Moslems), Rig Veda (Hinduism), Tripitakas (Buddhism), Guru Granth Sahib (Sikhism), Igo Mmuo (Igbo Religion). Failure to do so will have one drifting on the waves of superstition of the literary world of the Middle Ages.

It should be noted that since the Middle Ages, scientists have devoted their God-endowed brain to understanding various aspects of the universe, such as the structure of matter, the atom, electrons,  nuclear energy, computers, the origination of life in the test tube, interplanetary travels, Artificial Intelligence (AI), etc. On the other hand, we in Africa seem to engage our own brains on the allegorical writings of the Middle Ages dealing with such unscientific concepts as the Devil/Satan/Lucifer, angels, miracles, resurrection, etc. If this does not meet the definition of superstition, I don’t know what does.

We should concentrate instead on actualizing the universal religious consensus of doing unto others as we would like others to be done unto us. Aside from being a moral injunction, it is absolutely necessary for our self-preservation, which can only be accorded by peace on earth.

Once we wake up to the fact that the world outside Africa is science-driven, we appreciate the need to make science education compulsory for our children, starting from the primary school level, if we have any hope of boarding the high-speed train of modern education and progress 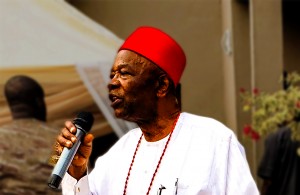 Failure to do so will keep us in perpetual bondage of superstition: witches, wizards, curses, “sending” and inability to distinguish clever tricks or magic from reality, misunderstanding of causality, etc.