A Note to “Biafra” Peacemakers: Operational Imperatives That Must Guide Building of Synergy Among Interested Parties

In response to a lamentation by a Biafra-restoration bandwagon sympathizer that no progress is being made in the effort to reconcile the rogue global Biafra franchise with the organizations that seem to be on the same Self-determination mission but which totally reject the criminal merchants of the rogue franchise, Tony Nnadi of the LNC wrote as follows:

“You may not believe this. But in the coming days, the evidence of it will hit the public space from the most inconvenient quarters and in a manner that will have substantial collateral damages, especially amongst the ranks of those who currently are adamantly refusing to examine what transpired that have led to the difficulties you refer to.

From our 4-hour meeting in 2013 and the Specific Response offered to each of the Eight-Point Strategy in the LNC Grand Script and also from subsequent engagements on the subject between 2015 and 2017, I know for sure that Nnamdi Kanu clearly understood:

(1)  that the LNC Strategic Goal is to Deliver Independence to Greater Eastern Nigeria (Lower Niger) since, by Geography, the Igbo spread deep into the coastal areas (Niger Delta) far beyond the Southeast (Igbo heartland).

(2) that the LNC Strategy for delivering that Independence is to dismantle the cage (Unitary Nigeria) in which we (Igbo) are held down, along with the rest of Southern and Middle Belt (the MNN Alliance Territory, who are all choking and facing the same extermination threat from the Fulani-controlled Sokoto Caliphate. 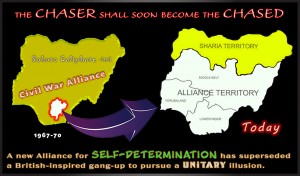 To defeat the minders of today’s Unitary Nigeria, the Civil-War alliance led by the Sokoto Caliphate must first be dismantled and rebuilt to sequester the Fulani-controlled Sharia Territory. The map on the right shows the MNN accomplishment.

(4) that the strategy paradigm of the LNC is not one in which the East (Igbo or Biafra) secedes from Nigeria but rather one in which the Unitary Nigeria defined by the imposed fraudulent 1999 Constitution is dismantled by all who are choking under it (i.e., South and Middle Belt) to instantly free all from the Caliphate bondage to chart their future, including the East (Civil-War Biafra).

(5) that the Movement for New Nigeria (MNN), which is the codename of the South/MB outreach of the LNC, is actually a “Movement for No Nigeria” as depicted by the 4-Bloc Map of Nigeria (below) clearly delineating the Lower Niger, Oodualand and the Middle Belt each of which will recover its sovereignty in full once the 1999 Constitution is shot down by their decisive, multi-regional joint action.

(6) that the bitter divisions, suspicions, and hatred carefully planted and nurtured by Britain and Caliphate Nigeria in the Greater Eastern Nigeria as a part of the strategy to win the 1967-1970 war against Biafra, imposes on us (Igbo) a need to reverse that terribly poisoned situation in the Greater Eastern Nigeria (Lower Niger) since that poisoned situation was central to the failure of the 1967-1970 bid for and sovereign Biafran nation. These realities dictated the Lower Niger Paradigm, which the LNC adopted and also the complete avoidance of the “Biafra” name tag for the pre-Referendum phase of the self-determination campaign as that campaign name-tag will ultimately damage any chances of success for the struggle. (The LNC had always made it clear that it is not opposed to the name “Biafra” being adopted by the peoples of a Freed Lower Niger Territory for their emergent Union as they go into Independence. The LNC also has, and had shared in private with Igbo Stakeholders, a clear plan for when and how the Biafra name can be safely introduced as a part of the terminal processes at a time the externally-imposed suspicions and bitter divisions have been defeated and ousted).

(7) that for the success of the LNC Grand Script, the LNC had to sail like a submarine to the enemy harbor, but he (Kanu) chose to do things that would compel the LNC to alter its stealth strategy which could instantly spell a crash of the entire design. This was what the LNC had to endure between 2013 and 2019, when the LNC submarine safely  landed at the undefended harbor of the enemy.

These LNC designs, (developed and deployed in 5-Phases since 1999) were somewhat encapsulated in a widely publicized 2012 Epistle to the Igbo by the Igbo titled: “ALADIMMA” by the Igbo Caucus of the LNC and those designs have not been altered to date.

Unfortunately, knowing all these and seeing those detailed 20-year Designs of the LNC (anchored on the aforementioned 8-Point Strategy below), to enact the Independence Outcome, and for self-seeking reasons that are now indubitably manifest, Nnamdi Kanu went on to craft many falsehoods regarding the mission of the LNC (and against my person) which was massively fed into the ranks of his ill-informed listeners, followers, sympathizers and worst of all, the rest of our people who genuinely desired freedom from Nigeria. This desire has acquired the one-word description, “Biafra”.

At a time the LNC, right there in Nigeria, was most carefully navigating the many landmines of Nigeria, the most damaging of the many falsehoods of crafted by Nnamdi was that the LNC was fighting for a better Nigeria (Movement for New Nigeria) and that the LNC was seeking that better Nigeria through constitutional amendments that would be dependent on the National Assembly. He also lied to his hoodwinked followers that the LNC was set up and heavily financed by the Caliphate/Federal Government of Nigeria to frustrate the “Restoration of Biafra”.

As expected, these heinous fabrications infuriated the seekers of “Biafra” both in the homeland and the Diaspora. So, the LNC became the most vilified and most hounded of all “Biafra Sabotaging Groups”. Some of the overzealous Biafra footsoldiers went on to physically attack and disrupt LNC quiet field operations in the homeland, fully convinced that they were helping to restore “Biafra”.

In crafting these lies, Nnamdi Kanu knew fully well that the LNC would not respond or otherwise, the LNC would blow its own cover in a most dangerous battlefield which Nigeria was (and still is). Thus unchallenged, his lies, outlandishly magnified with the Radio Biafra London megaphone, became truth in the eyes and ears of his followers and other “Biafra” seekers. This is how what is now being hoisted as the “Biafra-seeking multitudes” came about for which some of our ill-informed brethren are thinking that LNC, with no “multitudes”, should now join forces with the Biafra-seeking multitudes, without asking how the exertions of those “multitudes” could translate to the “Biafra” they seek and without bothering about the substantial damages being inflicted upon the strategic alliances being built both in the homeland (with our brethren in the rest of the Lower Niger); in the rest of Southern and Middle Belt Nigeria (to isolate and defeat the Sharia Caliphate) and the international circuit, especially the US, where the LNC script has found a strategic buy-in from both Official Washington and the relevant UN Organs in New York.

As things stand, the attitude of the LNC to the rogue global Biafra franchise being operated by Nnamdi Kanu under the banner of IPOB for the totally meaningless undertaking of “Biafra Restoration”, is informed by the preceding. For the avoidance of doubt, let it be known that the LNC has no great use, at this time, for either that hoodwinked multitude or the toxic emissions from the Radio Biafra London which directly damage the fabrics of each of the three levels of strategic alliances, as mentioned above, required for success in our collective bid to free our people and our homeland from the Sokoto Caliphate bondage that the world calls “Nigeria”.

When the Liberation Project gets to the Referendum threshold, the 60 million ethnic stakeholders who will be voting in the Lower Niger will not require the intervention of the rogue global “Biafra” franchise or the commotion of its hoodwinked and ill-informed footsoldiers to vote For freedom. The LNC has its mechanisms for reaching and relating with these potential Referendum voters throughout our territory.

In the immediate existential threat in which we are caught in today’s Unitary Nigeria as a people, those of us who will choose to distort and obfuscate these grave issues of strategy and methodology into some kind of personality clash or the more insulting insinuation of envy and jealousy between the principals, are of course, at liberty to continue in their folly. The Liberation Voyage will, by God’s Grace, power on to its destination port that is now clearly in view.